As discussed in Ezekiel 40 on this web site, there is a marked departure from the previous chapters in Ezekiel. From Ezekiel 40:1-49 through Ezekiel 48:1-35, the focus has shifted to the establishment of the millennial temple and the millennial kingdom that is centered in Israel. The following chart shows the period of time that the events in Ezekiel 40-48 will occur. Ezekiel 40:1-49 begins with the construction of the temple immediately following the battle of Armageddon, and is represented near the bottom right of the graph with the blue arrow that extends from the line representing the battle of Armageddon, and extending until the end of the thousand year reign of the Lord Jesus Christ. The major phase is the transition into eternity future, as shown by the second blue arrow that represents the events in Revelation 21:1-27 and Revelation 22:1-21. However, this line of transition between the millennial reign of Christ over this world and eternity future contains significant events for those in the world who reject the Lord Jesus Christ as their savior. These events are the release of Satan for a short season. During that time, all those who then reject the Lord as their savior, will participate in the final rebellion, and then they will be destroyed. Then Satan will be thrown into the lake of fire, all the rebellious people who ever lived on this world will be resurrected (the second resurrection) to appear before the great white throne judgment. At that time, it will be determined that their names do not appear in the Lamb's book of life, and they will likewise be thrown into the lake of fire for a perpetual life in judgment. More of this subject is discussed on this web site on Revelation 20 and the page on Revelation 20 timelines.

The final timeline for this web page is the aggregate timeline for all that was discussed from Ezekiel 34:1-31 through Ezekiel 48:1-35. The objective of these timelines on Ezekiel is to demonstrate that the Lord has not transferred His promises and covenants from Israel to the church, but is rather completing all of this promises and will fulfill all of His covenants to Israel just as His word says. The events captured in the timelines show the timeframe, relative to other events against the backdrop of historical events, as to when they may occur. There are no definite dates given in scripture when an event or series of events will occur. So, each event's beginning is based on the occurrence of, or end of another event, or maybe independent of everything else occurring around it. These timelines help in the identification of any dependencies between events. 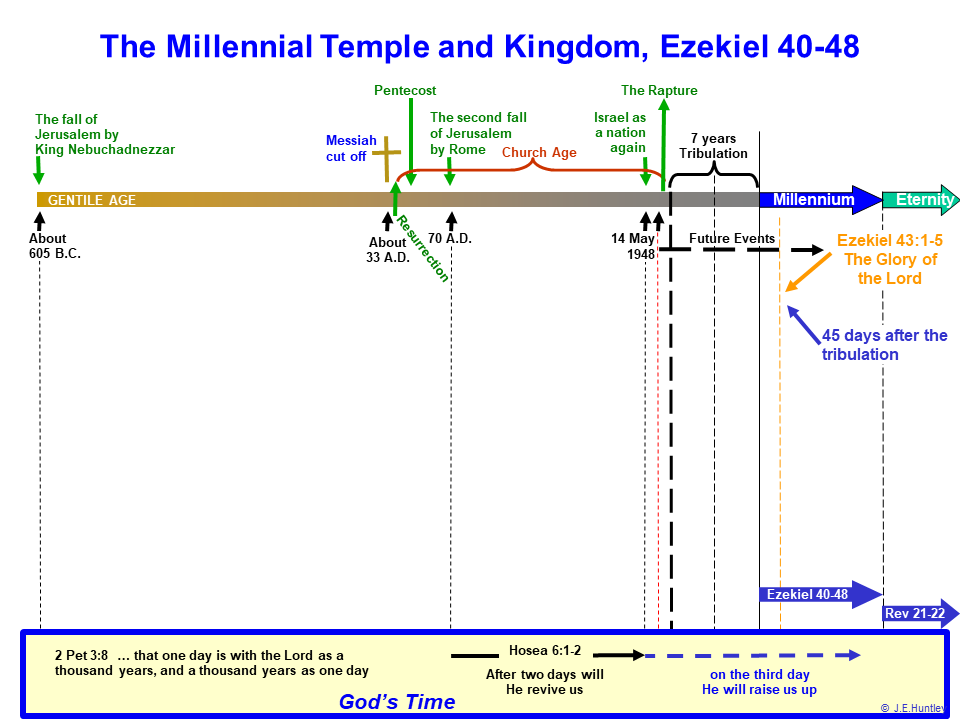