In examining this and the following chapters in Ezekiel, it will become clear that the Lord has and will keep ALL of His promises and the covenants that were made with Israel since He first called Abraham from the Ur of the Chaldeans, Genesis 11:28. The passages in Ezekiel 34 show that the children of Israel have been under the judgment of the Lord for several millennia, yet, God will restore them to their land, and He will fulfill all of the promises that He made with them. Some argue that because of the rejection by the nation of Israel of Jesus as their messiah, that all the promises somehow transferred to the Christian church. A casual reading of Ezekiel 34 through Ezekiel 48 should provide enough information to any reader to see that this position is without foundation. Even in the lifetime of many today, several of the prophetic events that will be reviewed in this website have been fulfilled, and more may yet be fulfilled in a very short period of time.

Ezekiel 34:1-31 shows the love and care that the Lord has for the nation of Israel, and the judgment that He has imposed on those that were in charge of teaching the ways of the Lord to the people of Israel. As this chapter is gleaned through, the reader is encouraged to reflect on the application to today. There are many warnings by the Apostles concerning the attempt to interject apostasy into the church. The warnings and judgments in Ezekiel 34 are applicable to the church.

In Ezekiel 34:1-10, the word of the Lord is pronounced through Ezekiel against those whom the Lord had established to shepherd over His people, Israel. These passages illustrate the Levitical priesthood failing in the mission given them by God to instruct the nation of Israel on the statutes of the Lord as given to Moses, Leviticus 10:8-11. This is a particularly important point that will be drawn out in the discussion of the latter chapters in Ezekiel 40-48 that speak on the roles and responsibilities of the Levite's during the millennial kingdom of Christ. As a result, the Lord was removing them from that position, Ezekiel 34:10. The Lord will instead put a new heart in his people during His millennial reign, Ezekiel 11:17-20. He will also establish a specific line of priests, from the seed of Zadok, who will keep charge of his sanctuary, and they will teach and judge the people, Ezekiel 44:15-16, Ezekiel 44:23-24.

The following table provides a few scriptural references to bring out some other examples of the abuses, and to illustrate the relevance of these passages to the church today.


In Ezekiel 34:11-13, the Lord declares that He will search for the scattered sheep Himself, after judging those who had the responsibility to teach the children of Israel in the ways of the Lord. As shown in the associated timeline for this page, Ezekiel 34 timeline, with the birth of the nation of Israel was the beginning of the return of the Jews back into their land. Israelis from all over the world have been working their way back to Israel.

Ezekiel 34:14-16 shows the loving care of the Lord toward His people and the restoration to wholeness that He will bring to them. The following table shows the passages concerning this restoration and the parallel to the church today.


The Lord Jesus Christ is the good shepherd and He is contrasted with false shepherds in John 10:1-18.

However, prior to this, the following passages indicate that there will be a period of judgment and reconciliation that will occur during the seven years of tribulation, specifically in the last 3 1/2 years of that period.

Ezekiel 34:17-21 depicts the judgment of the Lord over His sheep that He brought back into their land. These passages show that the Lord is dealing with issues internal to Israel. Other passages bring more light to this period of judgment. Jesus provided the sign that would lead to the evacuation of the faithful from their homes during his Olivet Discourse, Matthew 24:15-21 More is written on this subject on this site on the page discussing Matthew 24. At that time, the image of the Antichrist will be erected inside the temple area at the mid-point of the seven years of tribulation. This will be the singular event that will serve as the catalyst for several actions to follow.

First, will be the evacuation of the faithful Israelites into the wilderness, Revelation 12:13-14. In this passage, the woman represents Israel, and the child represents Jesus, who first visited His people and then suffered and died around 30 A.D. As shown in Revelation, a remnant will recognize the signs, flee to the wilderness and will be preserved by the Lord for the last 3 1/2 years of the tribulation. More information is available on this site on the page discussing Revelation 12:1-17.

Second, one can associate this time to the Lord's preservation and care for His people during the 40 years of wandering in the wilderness. This will be a time of judgment and sanctification, which Ezekiel describes this awesome time for the remnant, Ezekiel 20:33-38. This passage shows that there is judgment for the remnant that escapes to the wilderness. This is further elaborated upon in Zechariah 13:8-9. The response of this remnant is described in Zechariah 12:10-11.

The following table provides further insight as the judgments of the remnant of Israel during the last half of the tribulation, as compared to the parable of the wheat and tares in Matthew 13:24-30. There is also a period of judgment for the survivors of the tribulation that will occur at the beginning of the Lord's millennial reign, Matthew 25:32-33, and Matthew 25:41-42. More information is also available on this site on the page discussion of the three events listed in Matthew 25:1-46.


Ezekiel 34:22-27 shows the result of these events, following the battle of Armageddon and the establishment of the millennial reign of Christ over the world. Israel will finally live in a true state of peace and prosperity and a restored relation with the Lord. King David will be resurrected and serve as a prince of Israel. The Lord will also enter into a new covenant of peace with the people of Israel at that time. A result of this new covenant will result in: 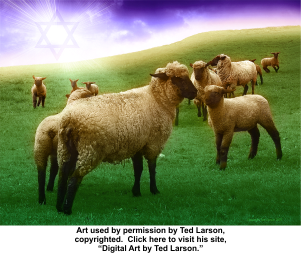 In Ezekiel 34:28-31, the Lord further details the extent of the people of Israel swelling in safety, and no longer bearing the shame of the Gentiles. He again reiterates the repaired and close loving relationship between Himself with His people. The end result is that the Lord will have established His intended purpose, Ezekiel 34:30-31:

You are My flock, the flock of My pasture; you are men, and I am your God.