In Ezekiel 41:1-4, the measurements continue with the temple. The minute and exact detail is one that demonstrates the Lord's intense interest in all that is involved with His creation, and His relationship with His people. 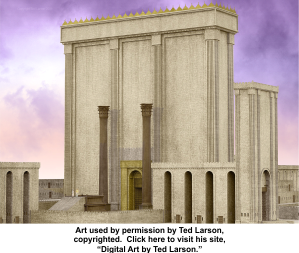 In Ezekiel 41:3-4, the bonze being passes through the atrium and enters the temple without Ezekiel. 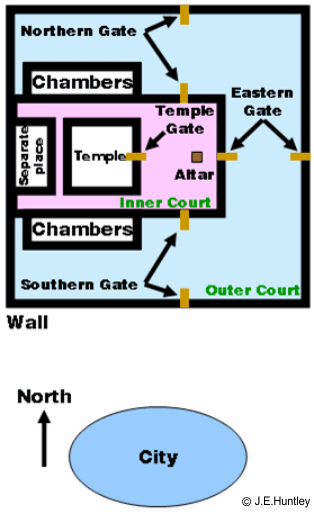 The bronze man measured the door posts, door, then he measured the inside room. This is the most holy place, where the Lord will reside during His millennial reign. This is the time when the messiah of Israel, the glorified Lord Jesus Christ will be physically present on the earth, and ruling over the world with a rod of iron, Psalm 2:1-12.

In Ezekiel 41:5-11, the bronze man continues to measure the temple area; the wall of the house, every side chamber, the windows, the height of the house, the thickness of the wall, the distance between the chambers, and their doors.

In Ezekiel 41:12-21, the bronze man measures the building behind the temple called the separate place. There is no function assigned to this building, which is rather large and ornate with the figures of cherubim and palm trees. The addition of the cherubim is different than in the other occasions where Ezekiel only observed figures of palm trees. On the separate place, the figures portrayed on the walls of the building alternated between the palm tree and the cherubim. In Ezekiel 41:17 and Ezekiel 41:20 indicates that these decorations were on the separate place and on the outside wall of the temple. The cherubs where drawn with two faces, one the face of a man facing toward a palm tree, the other face of a lion faced the opposite direction to the palm tree next to it. This depiction of two faces is unlike the beasts which were before the glory of the Lord that was seen by Ezekiel as recorded in Ezekiel 1:1-28. At that time, Ezekiel observed four living creatures, who appearance was like a man, but each had four faces, four wings, and their faces were of a man, lion, ox and an eagle. No reason why the likeness of the cherubim showed only two faces, and then why only that of a man and a lion, Ezekiel 1:4-11. One can speculate that these faces may relate to the reign of the Lord Jesus Christ who was born of a virgin and the Lord took upon him flesh, fully man, John 1:14. Also, the prophesy concerning the coming king, given by Jacob to his son Judah before Jacob's death in Egypt, may be represented by the face of the lion, Genesis 49:8-12. That prophesy points to the future reign of the Lord Jesus Christ, the messiah of Israel, who would be born in the line of Judah.

During the millennial reign of Christ He will be in His temple. This is also where the saints of God will be spending much of their time with Christ. This is the center of the world's activities at that time. All of the furniture in the tabernacle and the temple symbolized and pointed toward the future work of Jesus Christ on the cross. In Ezekiel 41:22, an altar of wood is described and measured. This is the table that is before the Lord.

There are significant differences between the millennial temple to the tabernacle and Solomon's temple. First, there is no curtain separating the holy of holies from the holy place. The curtain of separation was torn with he death of Christ on the Cross, Matthew 27:50-51, Hebrews 10:19-22. Second, there is no ark of the covenant with the mercy seat above it since the Lord is with His people Israel and the sacrifice is complete. Jeremiah prophesied about this, that during the millennial reign of Christ, the ark of the covenant of the Lord will not come to mind, be remembered, nor will they miss it, or will it be made again. Rather, Jerusalem will be called "The Throne of the Lord", and all nations will be gathered to it, Jeremiah 3:15-18. Third, missing in the millennial temple is the table of show bread, since Christ is the bread of life, John 6:35. Fourth, there is no lampstand since the Lord is the light of the world, John 8:12. Finally, there is no vessel for washing since Christ's blood cleanses and made peach for the believer with God, Colossians 1:20. During the millennial reign of Christ there will be no need for the missing furniture since their roles as types of Christ are no longer necessary as demonstrated above. Even more important is that there is no more high priest.

Finally, in Ezekiel 41:23-26, the measurements of the doors to the temple and the sanctuary are described. Again, as mentioned above, there is no more curtain to separate the rooms inside the temple, but doors are present. Ezekiel observes that the doors are open for him to see inside. Likewise, as mentioned above, the inside is decorated with the alternating image of the palm tree and cherubim on the doors. However, around the windows only the image of palm trees were inscribed.