Ezekiel 48:1-35 is the final chapter in this great book, and its focus is on the division of the land of Israel among the 12 tribes of Israel. It ends with the renaming of Jerusalem.

In Ezekiel 48:1-7, the division of the land occurs at the very beginning of the millennial reign of the Lord Jesus Christ. The land will be divided into two parts relative to the sacred portion. The orientation of each allocated parcel is east to west. The pattern and distribution of the tribes do not resemble the allocation and location of the tribes during the Old Testament days.

Seven of the tribes will be north of the sacred portion. The order of the portions, starting from the north, are:

The following graphic will help illustrate the distribution of the land parcels among the 12 tribes of Israel. 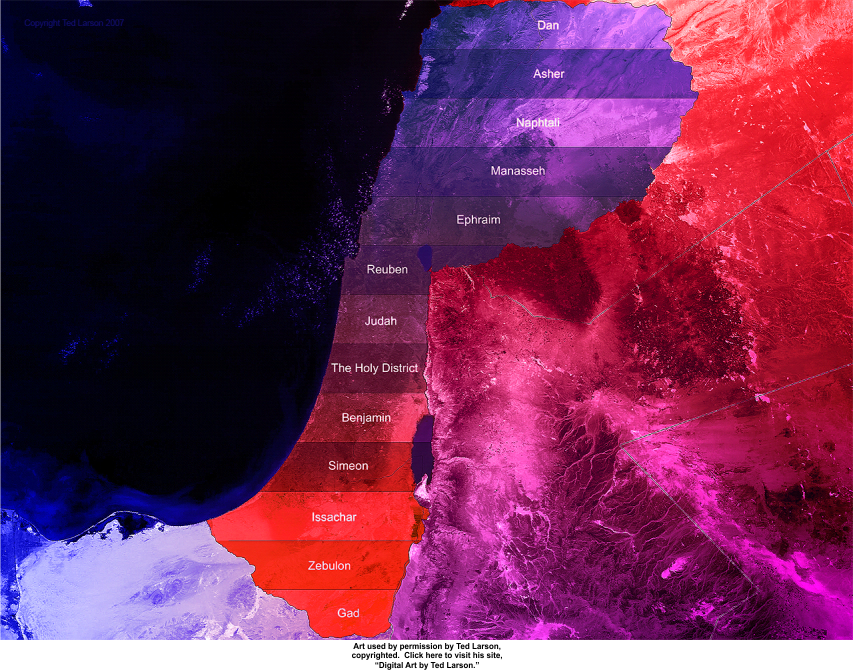 Ezekiel 48:13-14 provide the details on the allotments for the Zadokites and Levites, which are permanent and cannot be sold or exchanged. The land is declared by the Lord to be the best of the land, and is holy to the Lord. Therefore, it will never be passed into other hands.

Finally, in Ezekiel 48:21-22, the remnant of land that remains to the east and west of the holy portion is for the prince. The border of his portions are bounded by either the Mediterranean Sea or the Dead Sea. The prince’s portion will also be between Judah’s portion in the north and to the south, Benjamin’s portion.

In Ezekiel 48:23-29 the remaining five tribes will be south of the sacred portion. First in this final progression of assigned areas for inheritance of land, is the tribe of Benjamin. Their lot will form the southern border of the holy portion. From then on will be:

In Ezekiel 48:30-34 the dimensions of the city are given again. There will also be three gates on each side of the city, with each gate named after a tribe of Israel. It is interesting to see the distribution of the 12 tribes based on the birthmother for that tribe. The outer tribes were birthed by the maidservants. Closer in to the holy portion are the tribes birthed by or through Rachel The tribes inhabiting the holy portion and north of that area were born by Leah, who was Jacob's first wife.

In Ezekiel 48:35 the distance around the city is given as 18,000 cubits. This is the city where all nations will gather to honor the Lord, Jeremiah 3:17-18, Isaiah 60:14. The city’s new name will be: Yahweh-Shammah, "The Lord is There," as shown in the following graphic.

In Zechariah 8:3, Jerusalem will also be called the City of Truth, the mountain of the Lord Almighty, and the Holy Mountain. In order to fully understand the millennial reign of Christ, one must go back to the Old Testament prophecies concerning Israel, because all the covenants with Israel must be fulfilled.