The seven sealed book, Revelation 5:1-8, has great significance during the tribulation period for two reasons. First, it reveals the depths of man's sin against himself and nature. Second, it is the beginning of a rapid sequence of divine judgments upon mankind during the seven years of tribulation. Aside from the judgments described in this book, God also reveals His overall plan and purpose for His creation under the kingship of His Son, the Lord Jesus Christ. To understand the full purpose and magnitude of this unique book, we must look all the way back to the Garden of Eden, and also before the creative works of God to see why this book even existed, and why it was sealed. From the beginning, God intended that Man should have dominion over the world Genesis 1:26-28.

Man had a unique position within all of God's creation, in that he was the only one of whom God said, "Let us make man in our image." In addition, God had prepared the world and the universe so that man could occupy and live in the world and have dominion over it. However, man lost this role when Adam and Eve choose to go against God's word and ate of the tree of knowledge of good and evil, Genesis 2:17

This was a tremendous fall for Adam and Eve. Neither of them had known sin before this terrible occasion, but the potential for sin was present because of the tree of knowledge of good and evil. They were given only one commandment. It appears that both were in communion and fellowship with God until the tempter appeared as the catalyst to perpetuate the fall of man. Just as Satan has done throughout man's history, he began to work against Eve using the same old method, through the lust of the flesh, the lust of the eyes, and the pride of life, 1John 2:15-17.

Not only did their sin cause them spiritual and physical death, and all their descendants to be born unto sin, but it allowed Satan to usurp the role man had in this earth, Romans 6:16 Therefore, Satan wrested from man the gift that God had given him, to have dominion over the world. For whatever had belonged to man, thereafter became Satan's possession. All that the servant has, even his own self, belongs to the one to whom he obeys. This was the moment when Satan became the prince of this world and the air. Satan exercised this position throughout man's history in this world. This was demonstrated when Jesus was tempted after his baptism by John, and as Jesus marched toward the cross. Jesus acknowledged Satan's role in this world, John 12:31, John 14:30, Ephesians 2:2. However, God in His wisdom had a purpose which Satan did not understand. From eternity, before anything was, the Lord prepared all things, Proverbs 8:22-31.

Before the "beginning" of Genesis 1:1, Proverbs 8:22-35 shows that the omnipresent and omniscient God had established all laws, all events, and the complete plan for the redemption of man. All of this may have occurred before the angelic hosts were even created. What is most interesting concerning this passage is the last verse, where his delights were with the sons of men. This provides some insight as to why the Lord had begun his creative work, knowing that sin would also be brought about. However, this illustrates the love God has for man, and begins to describe the depth of his love for mankind before we were ever created. Other scriptures provide further enlightenment on the preparations that God made prior to the creative works of Christ, John 1:1-3, Hebrews 11:3, and 2Timothy 1:9.

Despite man's attempts over the ages to infer or project parity between God and Satan through philosophies or vacant assumptions, there is no comparison or contrast between God and Satan. Satan is a created being who has been judged and one day be thrown into the everlasting lae of fire. What is evident is are the un-God like characteristics of Satan and all those in his realm. Neither Satan nor his subordinates are omniscient, omnipotent, or omni-present, and they do not create nor are they able to discern or divine the will of God, 1Corinthians 2:7-8.

As evidenced by the temptation of Christ in the wilderness, Satan knew who Jesus was and the purpose for his physical presence in this world. However, it is argued that he was ignorant of the details, as described concerning the prophecies in Genesis 3:15 and 1Corinthians 2:7-8. But once Christ was crucified, the details were quickly made known to Satan. One consequence of the victory of Christ at the cross is found in Hebrews 2:14. The Antichrist and the false prophet will be the first two occupants in the lake of fire, followed by Satan more than 1,000 years later. In Revelation 20, it is shown that death and hell are also thrown into the lake of fire after all those individuals who are not found in the Book of Life to suffer eternal torment, Revelation 20:14-15.

Christ won the victory over Satan and all his dominion at the cross. As discussed earlier, Satan does not know the depths of God's wisdom, and though he may have known the existence of this book, it is doubtful that he would have known its contents until it was revealed to the Apostle John. This book may have been sealed for two reasons; one was to insure that it was not opened until the time appointed by God, and two, to keep its contents from being known until the appropriate time. Since man did not have access to the heavenly places, but Satan did, it is thought that this knowledge was kept from the entire heavenly host until it was to be revealed to the apostle John. Though man lost his position in God's creation through sin, allowing Satan to usurp that position, it is the Lord Jesus Christ who exercised dominion over the world. He is the only one found worthy to open this sealed book and retake what man had lost, Revelation 5:1-14.

Christ is exercising his Lordship over His creation, and is beginning the sequence of events that will judge the rebellious inhabitants of this earth, physically and spiritually. His will also lead toward His second coming and ultimate eternal rule over the Earth. The following graphic depicts some of the important events relative to the slice of time cut out of eternity; the history man and his future. It shows a small segment of time within eternity in which the creative works of God occur.

The arrows highlight important occurrences that impacted world history, and the colored bars show large intervals of time and the events that characterize them. To the left of the line representing eternity is a simple depiction of the trinity, who had no beginning, and has no end. What is intriguing to consider when simply graphing such complex events, is that an eternal God loved us so much. God who set into motion all of this activity within short span of time before we ever existed. The end result is that He will have created a new heaven and new earth populated with people he died for, who freely choose to follow Him, and accepted his Lordship over their lives. It is unfathomable to comprehend the extents of such love, and the desires that God has over all of his people, and all that he has provided for them through eternity, Colossians 1:14-22. 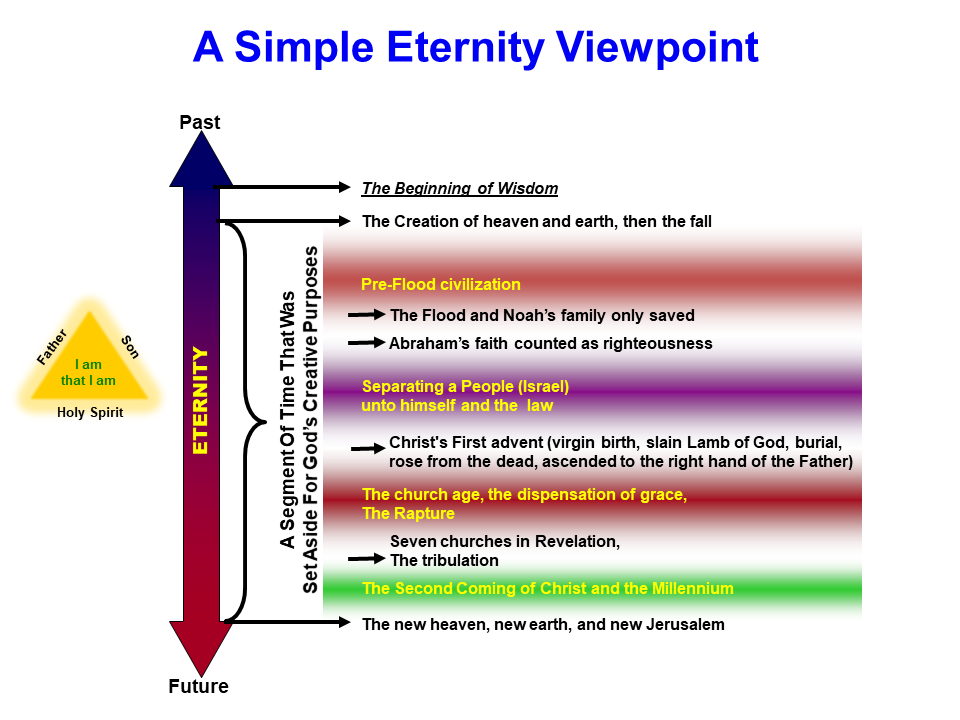