Revelation 17:1-18 provides a review of the tribulation period, with the focus on the events surrounding religious Babylon, and provides a great amount of detail. The following chart is meant to provide one way to view all these episodes in time described in this chapter within the context of the tribulation, and in harmony with other prophetic passages. To understand the information on the following chart, time increases from the left to the right, and from the bottom upward. In this case, the harlot's reign is shown to increase in power through the decreased transparency of the yellow bar from left to right, which is generally expected to begin immediately following the rapture of the church. The red burst at the end of the yellow bar represents the catastrophic end of this ecumenical church, or harlot, by the ten kings and the Antichrist.

Simultaneous to the harlot's influence over the world's affairs is the emergence of the 10 kings, who have yet to ascend to their power. This is represented by the light purple bar in the first half of the tribulation. As with the harlot, the bar is mostly transparent to represent the initial ascendancy to their position. These individuals may be leaders of some sort in a democratic environment, and have influence but no substantive power over their region's affairs. It is not until the death of the harlot that they realize their true power, but as described in the page on this site, Revelation 17:1-18, God puts into their hearts to surrender their crowns to the Antichrist. This is shown in the following graph on the last half of the tribulation in a solid purple bar. Sometime Later, according to Daniel 7:8, three of the horns, or kings, will be destroyed by the Antichrist (or little horn). More is written in this website concerning the little horn on Daniel 7. This event is likewise shown with an orange burst. The timing is unknown, but is speculated to occur soon after the Antichrist assumes his full satanic power and position, according to Revelation 13:1-9.

Next up the vertical axis in the timeline is the orange timeline indicating the role of the Antichrist. His graph is shown on the timeline to be solid before the beginning of the tribulation, until near the middle of the tribulation. His activities are represented this way because according to Daniel 9:26-27, he is to confirm a seven year covenant with the children of Israel to signify the start of the seven years of tribulation. In order to do that, he would have already been in a position to negotiate and sign this treaty, and have had some experience behind him to convince the leaders of Israel that he could fulfill the demands of the covenant. Just before the end of the first half of the tribulation, John is shown that the Antichrist is called by Satan from the seashore, Revelation 13:1. Soon afterwards, the Antichrist will be indwelt by Satan and after the head wound. He will also experience a false miracle that will mimic the resurrection. The Antichrist is fully Satan's man. So from that point, the bar graph is a solid darker orange to signify his singular rule over the reborn Roman Empire, and influence over the rest of the world.

Still further up along the vertical axis of this graphic, the days of Daniel 12:7 and Daniel 12:11-12 are shown. This is described in the chapters covering Daniel 11 and Daniel 12. In short, the longer days beyond the 1,260 days, or 3 1/2 years, may indicate that the invasion of the Antichrist into Israel will occur a month before the mid-tribulation point. At that time he will set up his headquarters in Jerusalem, in order to protect Israel from invading forces from the north and south, Daniel 11:40. The will be the second invasion into Israel of three. The first will be the invasion of Gog and all the Muslim forces written of in Ezekiel 38:1-23 and Ezekiel 39:1-29, and then the third invasion is the battle of Armageddon, as shown in Revelation 19:11-21 and many other passages.

The following set of charts highlights one of the several episodes in time when prominate activities occur in Revelation 17:1-18, concluding with a summary chart of all those activites. In total, these events begin soon after the snatching away (rapture) of the New Testament church, but some before the great tribulation period begins, Matthew 24:15-22. This is when the revived Roman empire comes into fruition, being made of iron and clay, which King Nebuchadnezzar saw in his dream, Daniel 2:40-43. 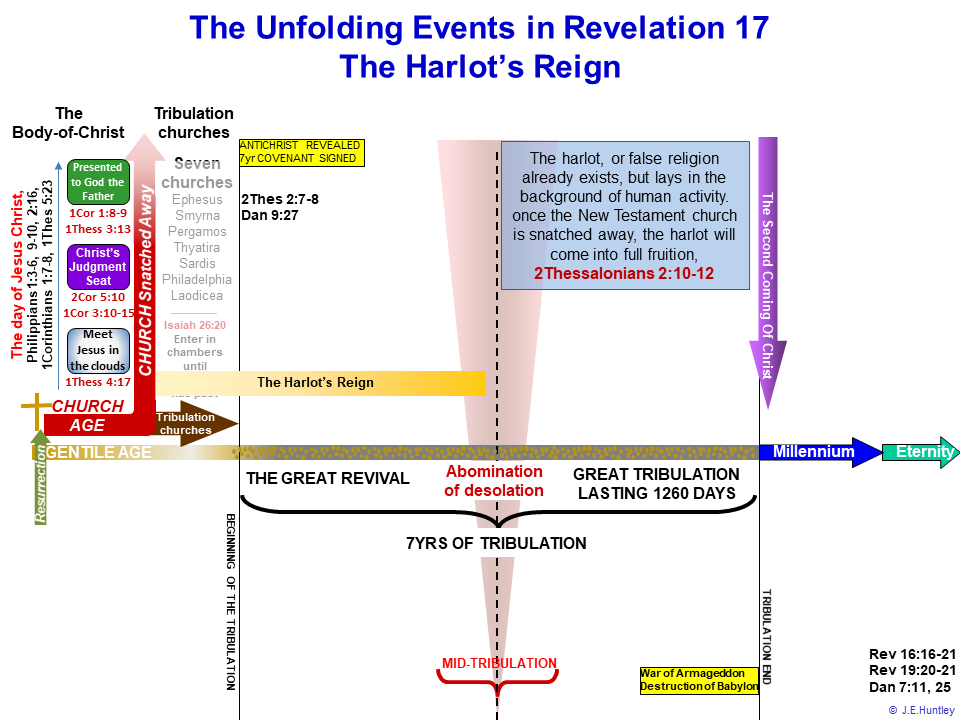 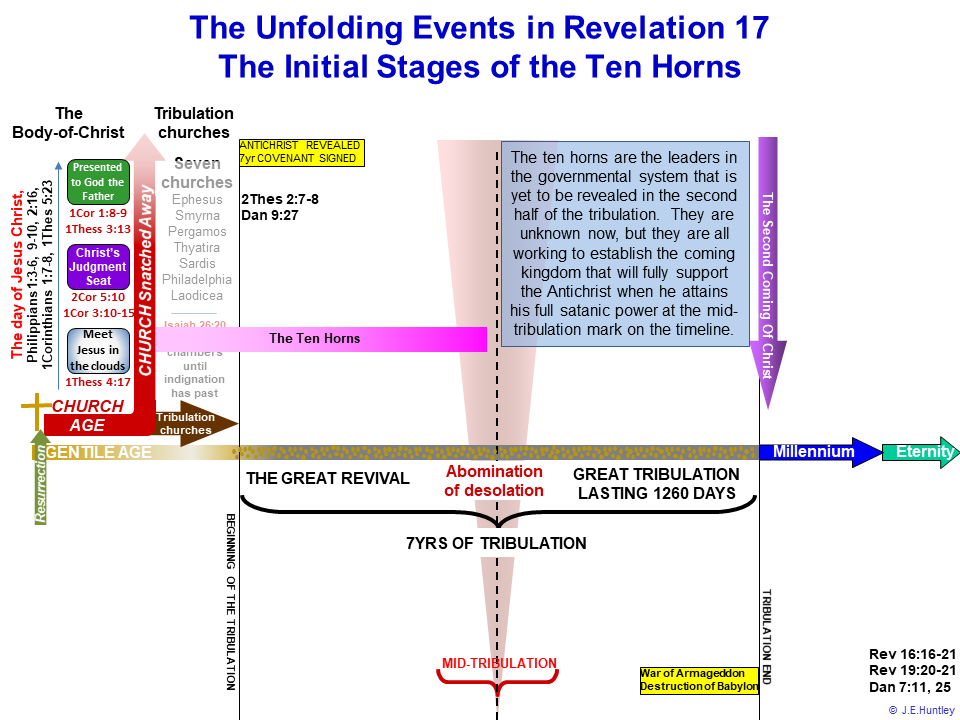 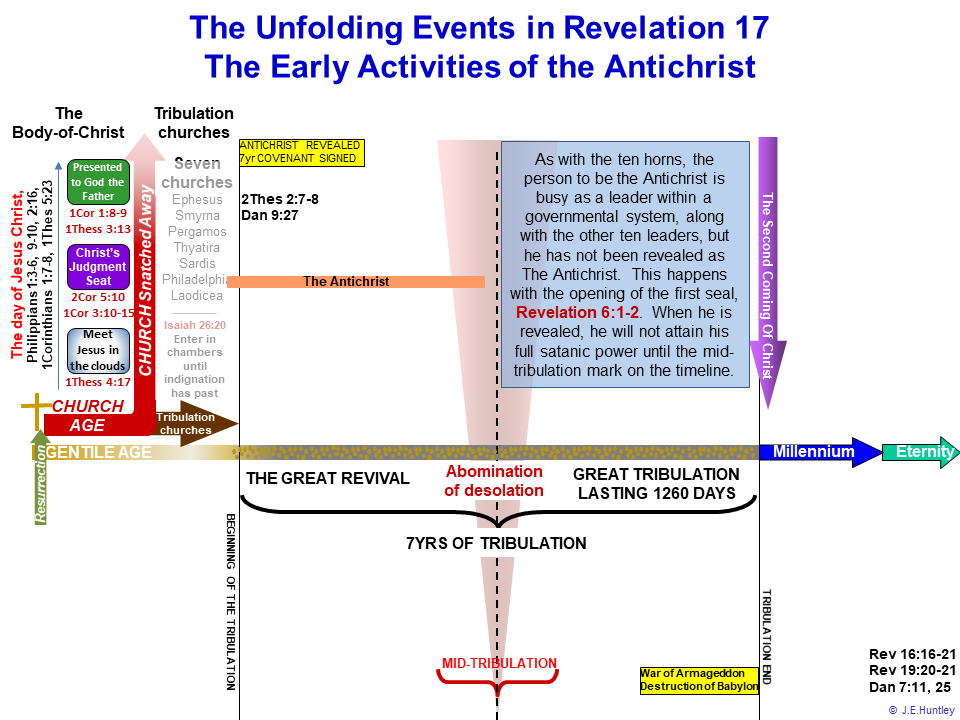 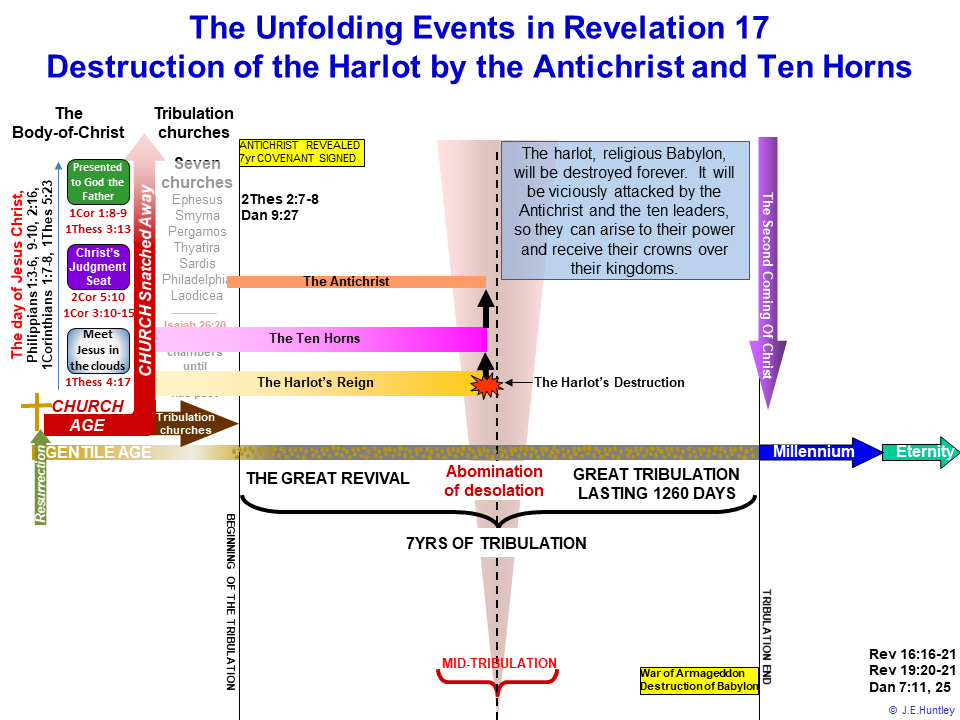 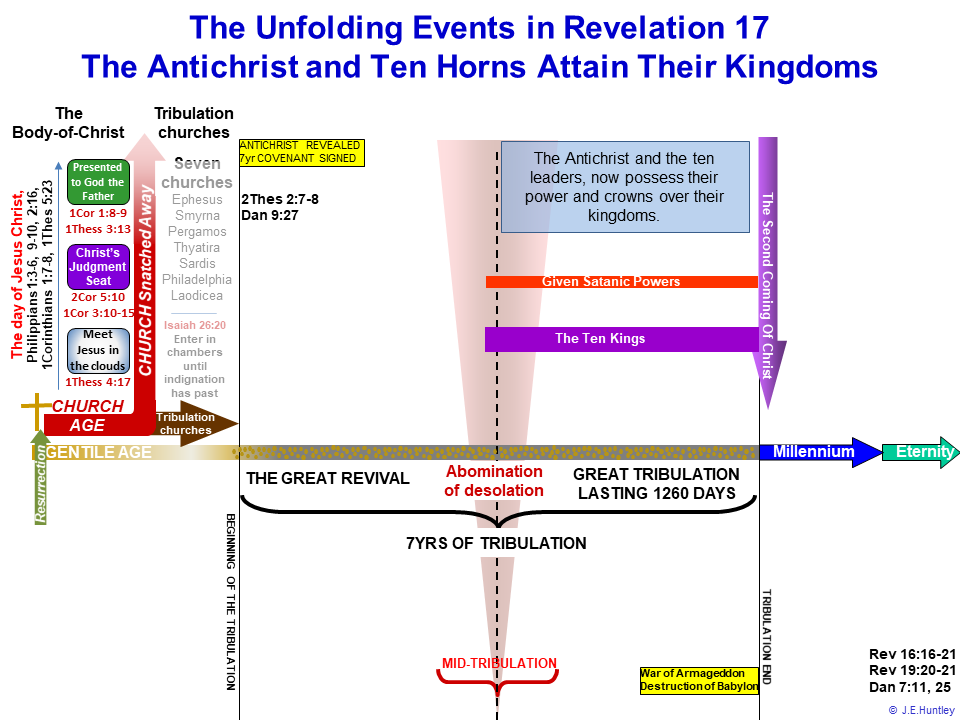 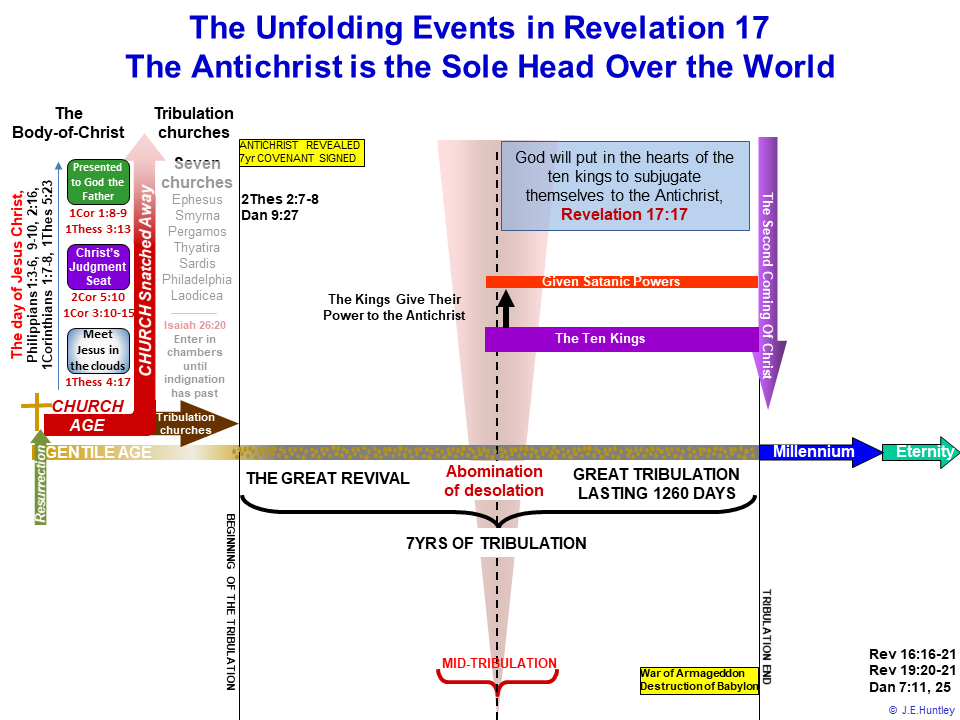 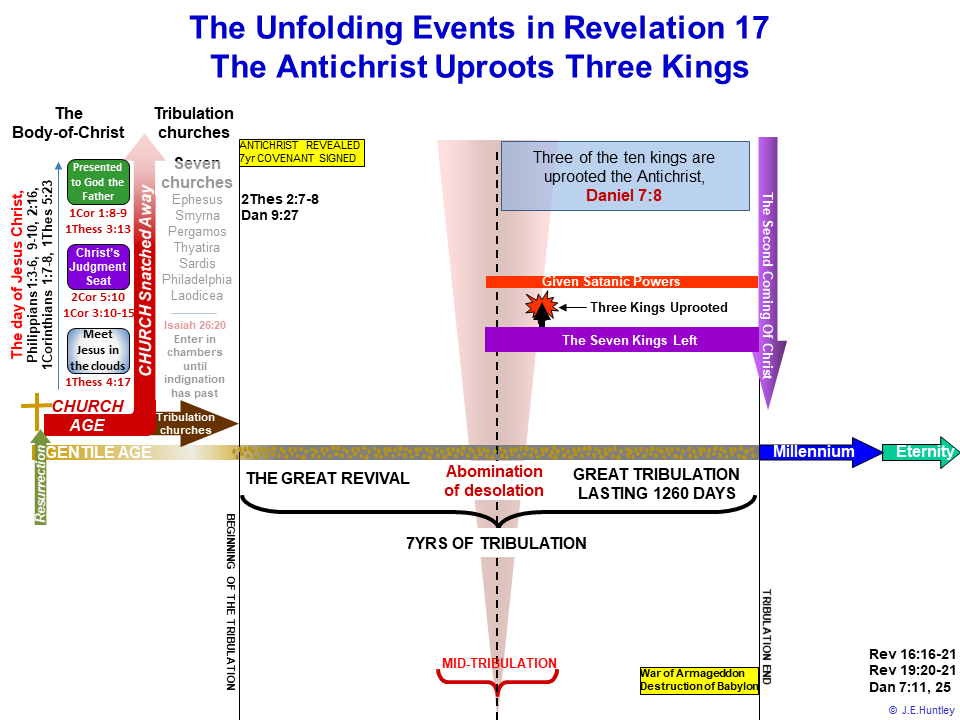 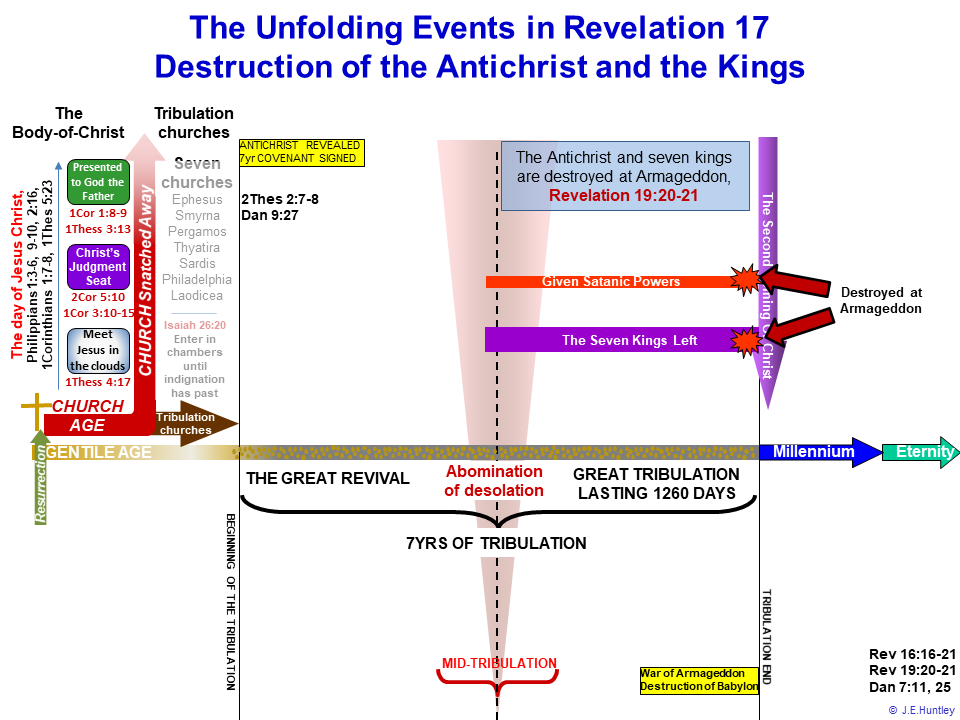 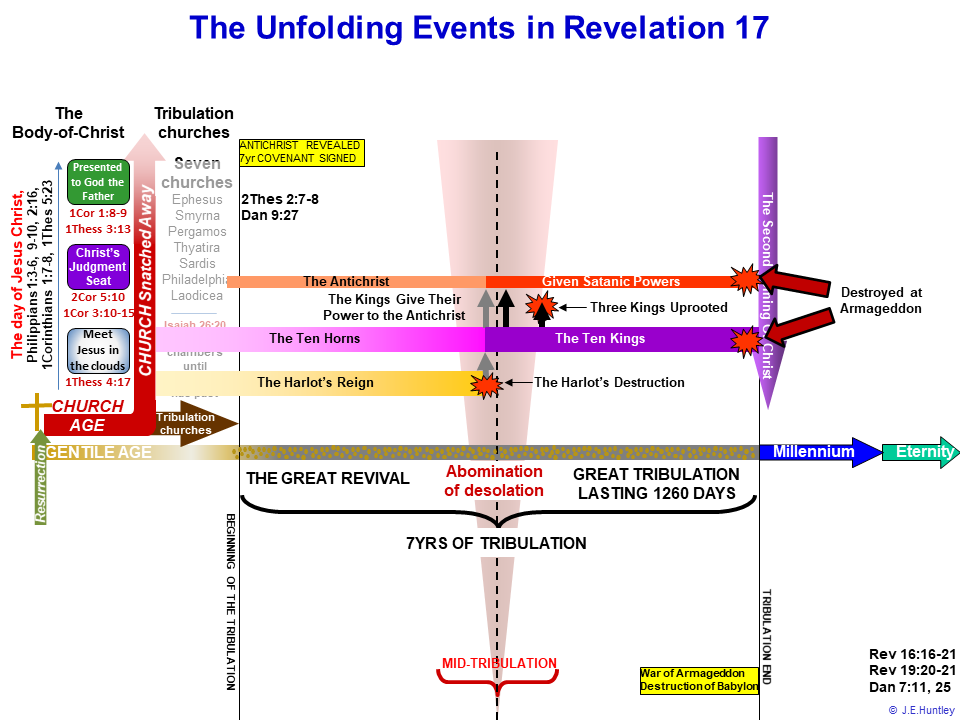 The following chart illustrates the timeframe when Revelation 17:1-18, will be filled, shown near the bottom left of the graphic, titled "Religious Babylon." 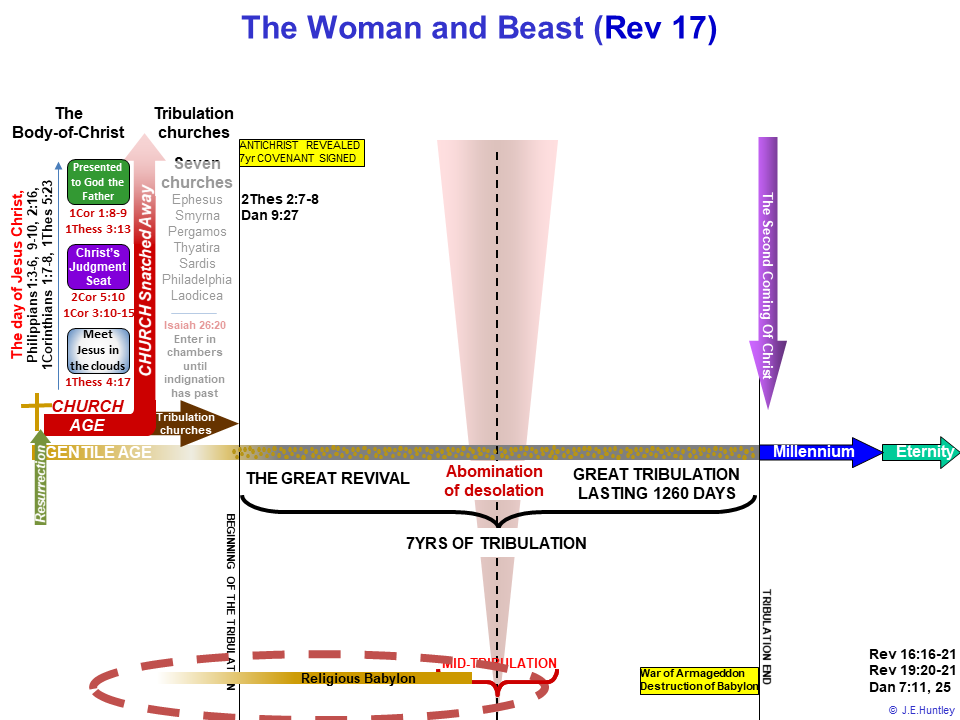 The events described in Revelation 17:1-18 are shown in the following graph, imbeded with all the events revealed to John in the book of Revelation up to this moment. Again, this is the final preparation for the end of the tribulation: 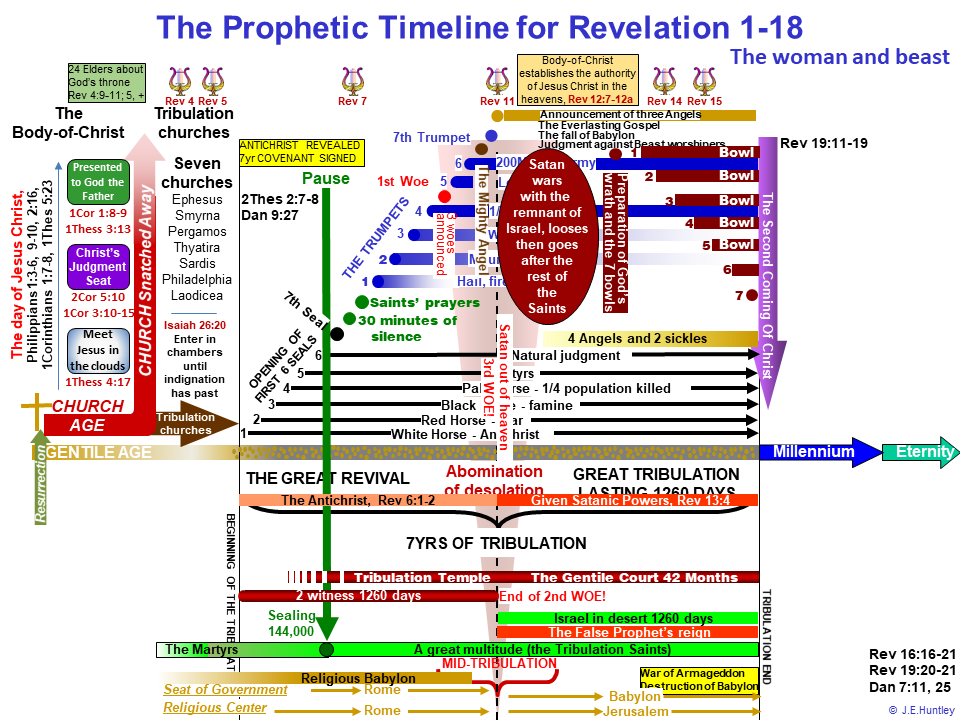