It may be instructive to briefly elaborate on the following chart that relates to the information presented in Revelation 6:1-17 and Revelation 7:1-17, which is the timeline for the tribulation saints. This group of believers in Christ Jesus will not exist until after the snatching away (rapture) of the church, and then the man of sin is revealed, 2Thessalonians 2:6-9. The point of the following graphic is to illustrate several significant events described in scripture that will occur in both heaven and earth, and the possible sequence of those events. Along the vertical are events that are contemporary events, whereas along the horizontal are events that occur in sequence, with time increasing from left to right. There is no wholesale agreement among commentators of the scripture concerning these events before the tribulation occurs (with the signing of the seven year covenant between the Antichrist and Israel), as outlined below. What is presented below is how these future events, relative to the rapture of the church, may occur. It is expected that the events in heaven, beginning with the Lord opening the first of seven seals on the scroll, will occur simultaneously with the signing of the seven year covenant between the Antichrist and Israel. These two events reveal two actions, the first is the true beginning of the seven years of tribulation, and the second is the revealing of the man, the Antichrist. 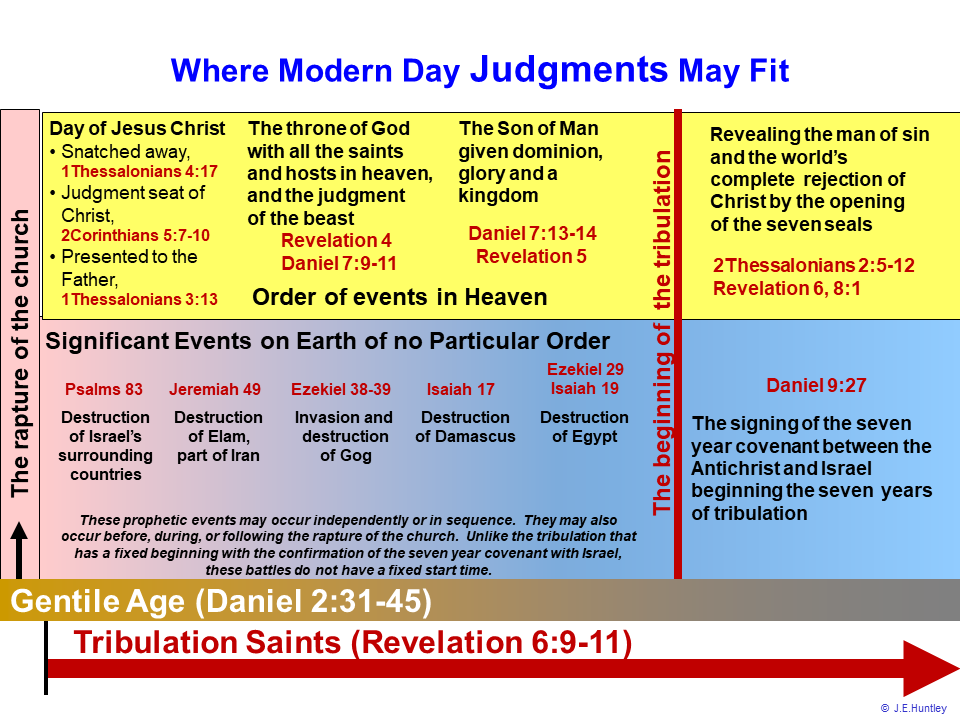 Revelation 7:1-17 reveals three events. First, is a pause in any further activity before opening of the seventh seal, implying a rapid sequential opening of the first six seals. This is shown as a green vertical line in the first half of the tribulation. During the pause, is the sealing of the 144,000 Israelites, 12,000 from every tribe. 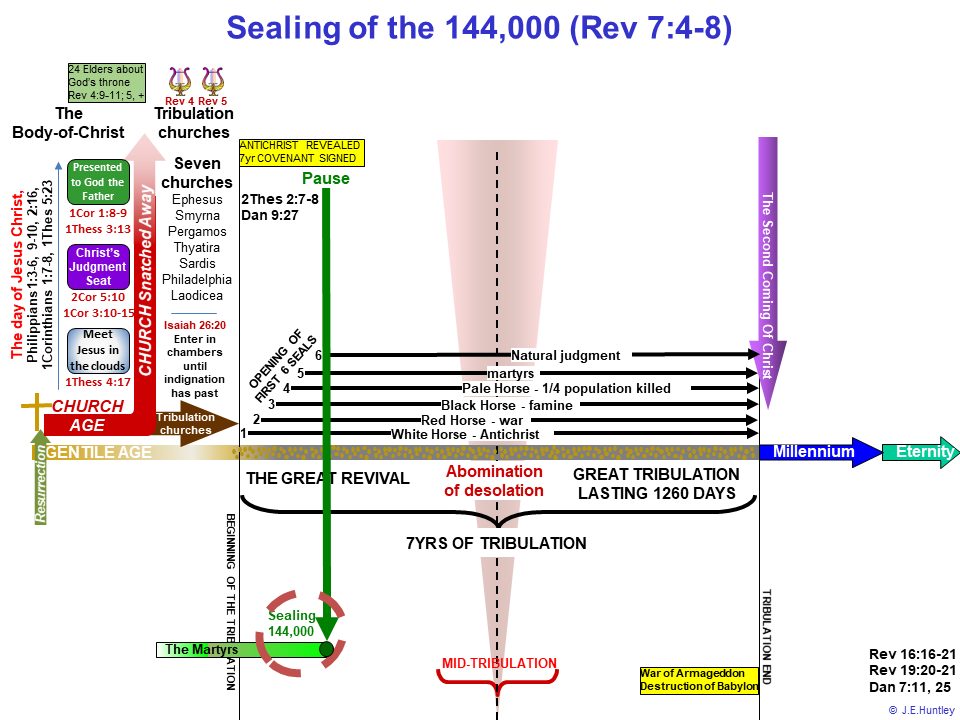 Afterward is the identification of the great multitude, which no man could number, of all nations, and kindreds, and people, and tongues, stood before the throne, and before the Lamb, clothed with white robes, and palms in their hands, Revelation 7:9. These are the tribulation saints. This is shown as a horizontal line from the first half of the tribulation through the end of the tribulation. This group is placed adjacent to the group of martyred saints revealed with the opening of the fifth seal, Revelation 6:9-11, who had asked the Lord for vengeance, but were told to wait a little longer until their numbers had reached a predetermined point.

At the top of the graph is the symbol of the song sung by the tribulation saints. 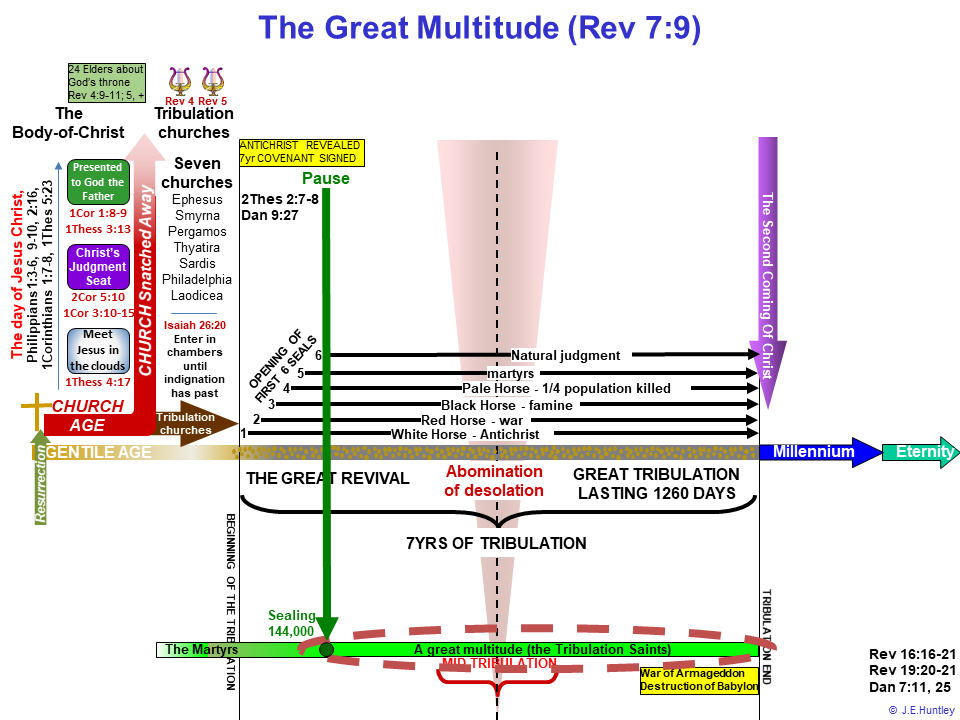 At the top of the graph is the symbol of the song sung by the tribulation saints. 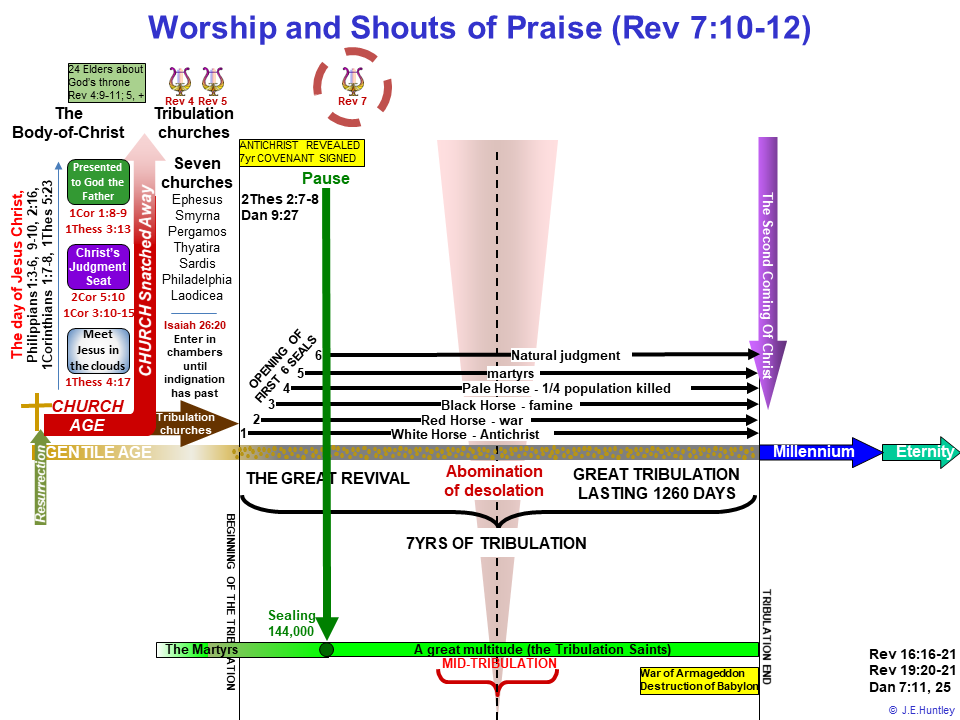