This chapter is a continuation of Revelation 2. As seen in the chronology of Revelation, John is viewing these events of this chapter from the perspective of earth, and is receiving and writing the letters from Christ to the seven churches.

Revelation 1:1-20, Revelation 2:1-29 and Revelation 3:1-22 form a group of chapters that relate to the Lord's relationship with the tribulation churches and describe the church age after the rapture of the New Testament churches led by Peter and Paul, Galatians 2:6-9. The rapture is a future event at the time of this writing, but is an imminent event. More information is available on this site concerning this subject, and is easily navigated to by clicking on the link, the rapture. The events in this chapter describe characteristics and activities of each of the seven churches in Asia, and a note of commendation to most of the churches, and a note of condemnation to some of them except two. This chapter concludes these letters from the Lord.

There is symmetry of these seven letters. One of them may serve as the reason for this chapter break between Revelation 2:1-29 and Revelation 3:1-22. That is, in the council the Lord gave to the church at Ephesus, he told them to "Remember." For the first church in this chapter, Sardis, the Lord also tells them in His council, to "Remember." These are the only two churches that the Lord brings this up.

The following map illustrates the relative location of the seven churches geographically, and among each other. The first church the Lord wrote to, Ephesus, is located on the map below, which is the southernmost star along the coast of Asia Minor. The progression of the letters to each church follows northward until Thyatira, then inland and southward on this horse shoe pattern of the stars. This last set of letters begin with Sardis, and is south of Thyatira. 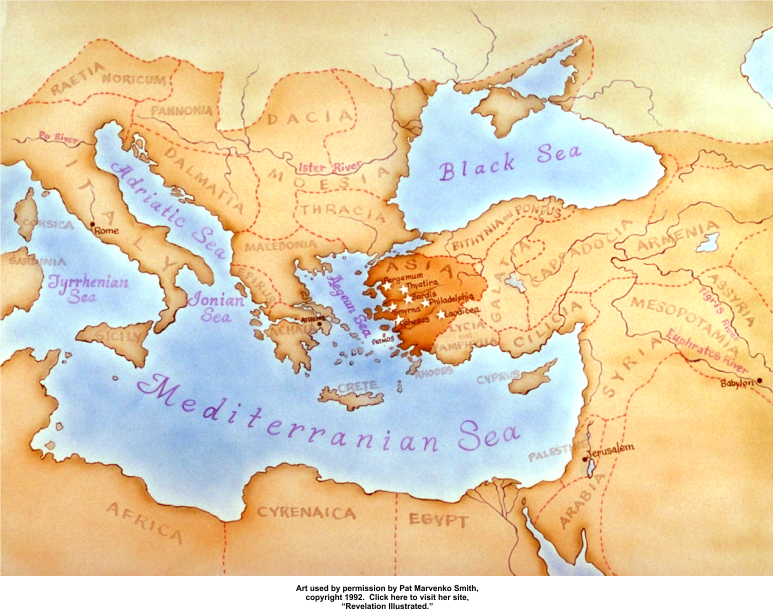 The interpretation has already been given in Revelation 1:20 concerning the mystery of the seven stars where the stars are the angels over each of the churches, similar to Daniel 10:1-21, Daniel 11:1, and Daniel 12:1.

In the middle of Revelation 3:1, the church was known for a reputation of being alive. However, the very next phrase in this verse qualifies this statement in that the Lord declares this church dead. The reputation of men who are esteemed receive a good report by men, but it is not even on the same plane as receiving a good report from the Lord. This is demonstrated in the account of Samuel arriving at Bethlehem to anoint one of Jesse's sons to be king over Israel. In review of his sons, Samuel looked upon their physical characteristics and not the heart, 1Samuel 16:1-13. The parallel in scripture is found in Jerusalem, before the invasion of King Nebuchadnezzar, where the people of Israel believed that just because they believed that the Lord was in their midst, that calamity would not come upon them, Micah 3:11. However, the Lord passed judgment upon them who abhorred justice, Micah 3:9-12. Likewise, the Lord commented that there would be those in the judgment who would claim that they did great things in His name, yet He said for them to go away for He never knew them, Matthew 7:21-23. This church is filled with such people today, who are dead on the inside though they practice many good and wonderful works toward mankind.

In the last part of Revelation 3:1 is the qualifier to the previous phrase in this verse, the church of Sardis is actually dead. Works alone or the numbers of individuals attending a congregation are not what make living church; it is the presence of the Spirit of the Lord. Despite their deadness as a church, the Lord is still faithful, 2Timothy 2:11-13. As an example, prior to the Israelites appearing below the mountain Sinai, the Lord had been providing them daily sustenance of manna from heaven, except on the Sabbath. This provision by the Lord lasted through their entire exodus of 40 years, Exodus 16:34-35. When Moses ascended up Mount Sinai at the call of the Lord, and had been removed from the sight of the people for 40 days, they rebelled against the Lord, made an idol that they declared delivered them from Egypt, and performed many lewd acts. In spite of all this and other future acts, the Lord continued to provide them their daily manna. But when Moses did come down the mountain and he witnessed the great sin among the people, judgment came upon the people, Exodus 32. But the Lord was still faithful to His word to deliver the people into the Land that He had promised to Abraham, and confirmed with Isaac and Jacob, Exodus 33:1-6.

In Revelation 3:2-4, the Lord councils the church of Sardis to wake up. They were encouraged to strengthen what remains and is about to die. The Lord also mentions that their deeds are not complete in the sight of God, but they are to remember what they have received and heard. They are to obey the word that was given to them and repent. They are given a stern warning that if they refuse to wake up, the Lord will come like a thief in judgment, Matthew 24:45-51. There are a few people in Sardis who have not soiled their clothes because the Lord said:

In Revelation 3:5-6, the Lord says to him who overcomes, John 16:33, 1John 5:3-5, Revelation 21:6-8, that they will be dressed in white. He continues to say that their name will not be blotted out of the book of life, and that they will be acknowledged by the Lord before the Father and the angels.

A summary of the letter to the church of Sardis

In Revelation 3:7, the Lord writes to the church of Philadelphia and reveals Himself to this church as holy and true. The holiness of the Lord is described in 1Peter 1:10-16. The Lord had also presented Himself to the children of Israel during His first advent as the truth, the fulfillment of all scripture, John 1:6-14, John 14:1-7. He is also shown to hold the key of David, and that He is the fulfillment of the promise God had given to King David that his throne would continue forever, 1Chronicles 17:10-15. There are other keys described in scripture:

Finally, the Lord is described as the one who opens and no one can shut, and what He shuts no one can open.

In Revelation 3:8-10, the Lord reveals to this church that He knows their works, and that He had placed before them an open door that no one can shut. The church of Philadelphia had little strength, Zechariah 4:1-9, 2Corinthians 11:30, 2Corinthians 12:7-10, but relied on Christ for their strength. The Lord commended this church that they had kept His word and had not denied His name.

The Lord also judges those who claim to be Jews, but in the eyes of the Lord, they are of the synagogue of Satan. This group of people must have and will afflict the members of this church, and the Philadelphia church greatly. But the Lord now proclaims that they will fall down at the feet of this church's members, and acknowledge that Christ loved the congregation of Philadelphia. These false Jews are the same group of individuals that the Lord referred to as He spoke to the church of Smyrna, Revelation 2:9.

The Lord again commended this church for they had kept the commandments of Christ, John 14:21, 1John 2:3-6, and had endured patiently, Galatians 5:22-24, Colossians 1:9-12. As a result of these things, the Lord promised them that they will be kept from (not through) the hour of trial (the tribulation) that is coming upon the whole world to test them (those left behind following the rapture of the church before the tribulation).

The Philadelphia church is the second of two churches that the Lord gives no word of correction or condemnation. This church, in the face of those who persecuted them by thinking that they were doing the work of God, is faithful in all things and is given a great assurance that they will be raptured, and not go through the terrible days of the tribulation.

In Revelation 3:11, the Lord makes two comments, that He is coming soon, which is the rapture. He also encourages them to hold on to what they have, which is not material but spiritual things, so that no one can take their crown. There are several crowns spoken of in the scripture:

A summary of the letter to the church of Philadelphia

In Revelation 3:15, there is no commendation given. This is a completely opposite to the churches of Smyrna and Philadelphia who had only commendations from the Lord Jesus Christ, and no words of condemnation.

In Revelation 3:15-17, the Lord tells the church of Laodicea that they are neither hot nor cold. The Lord has no place for apathy, as seen in His response to the observation that they were either hot or cold, which is to repulse their behavior and lack of any commitment. They were self-deceived, thinking that they were rich, 2Timothy 3:1-5 in that they had acquired wealth and did not require anything (in contrast, they did not follow spiritual things as in John 16:12-15). The Lord's judgment is that instead they are wretched, pitiful, poor, blind, and naked. In contrast, Christ knew of the church of Smyrna's' afflictions and poverty, but declared that they were rich! A parallel is the story that the Lord spoke of concerning the rich man and Lazarus in Luke 16:19-31. The rich man, who is never named in this story, concerned himself with the matters of this world, with no consideration for his spiritual welfare. Lazarus, suffered much at the doorstep of the rich man. However, when both men died, Lazarus was found in the bosom of Abraham, whereas the rich man was in hell, suffering.

A summary of the letter to the church of Laodicea