As seen in the chronology of Revelation, John is viewing these events from earth. Though this is a very short chapter, it reflects the enormity of the emotional impact these passages in the first part of this book have had on John. One could argue that this pause is really for John to regain himself, in preparation for all that is yet to be revealed.

This is another pause in the rapid action of events so far in this book and occurs about the mid-tribulation period. This is a very interesting chapter within the book of Revelation, primarily for the reason that this is a difficult chapter to put one's arms around. Expositors are all over the map in attempting to provide insight to this chapter concerning three main issues:

This chapter is also interesting because of the question, why is it here? If this chapter were removed from the book of Revelation, would it be missed? More questions than answers are spawned by this chapter. Finally, one needs to ask, who benefits from the events revealed in this chapter.

In Revelation 10:1, John observes a mighty angel. There was a previous occasion when "A Mighty" angel was made known to John. This first appearance was before the throne of God when a mighty angel asked who is worthy to open the seals and open the scroll, Revelation 5:1-2. The events recorded in Revelation 10 occur on earth rather than heaven, and there is no indication that the mighty angel of this chapter is the same as the one John observed in Revelation 5:1-2. This mighty angel serves as the agent, the herald of Christ Jesus who was worthy to take and open the seven sealed scroll. The angel comes from the throne room of God, and with a loud, declarative voice, announces the eviction of the usurper from the world by revelation of the small book that lays open in the angel’s hand.

However, one aspect of the mighty angel of this chapter is his physical appearance. His physical characteristics are similar to those things described about Christ and the throne of God, which may indicate that his position in heaven may be very close to the throne. This does not mean that this mighty angel is the Lord for two reasons. First, this verse clearly states that this is "ANOTHER" mighty angel, and second, John does not fall on his face before this angel as he did in Revelation 1:17-18.

There are two other occasions when someone physically close to the Lord had their bodily characteristics reflect that closeness. Moses' face was radiant after coming down from Mount Sinai with the two tablets of the Testimony, Exodus 34:29-30. Also, at the mount of transfiguration, Moses and Elijah appeared with Christ, and all were surrounded by a bright cloud, even though they had a bodily form that Peter, James, and John could recognize, Matthew 17:1-5.

Additionally, groups of individuals, whether in their physical bodies or eternal bodies, likewise reflect the glory of Christ Jesus in a number of ways: 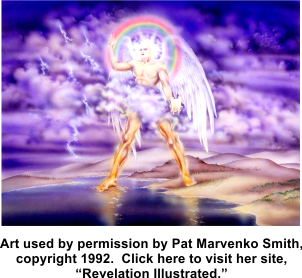 The physical characteristics of the mighty angel that are observed and show the closeness to the Lord are:

John also observes that he is holding a little scroll that is laid open in his hand.

In Revelation 10:2, two aspects of this angel are given. First, he is holding a little scroll that lays open in his hand. Some feel that the scroll opened by the Lord with the seven seals is the same as this one. However, there is no indication given that this little scroll is related to any other known document. The physical size of the scroll is described as "little" and its contents are not given. There is no effort made in scripture to associate the two documents.

Second, the mighty angel's right foot is on the sea, and his left foot on the land, Psalms 95:5, Psalm 24:1, Psalm 8:6-9, Haggai 2:6. If this angel is not Christ, then he may be Christ's representative due to the physical characteristics of the angel given in the previous verse. As Christ's ambassador, He may be given the right and authority over all that is part of the terrestrial and maritime environments, and his height stretches into the atmosphere, the lower heaven.

In Revelation 10:3, John hears this angel shout, with his voice sounding like the roar of a lion. Again, this reflects a characteristic of Christ, as the Lion of Judah. Interestingly, John does not provide the content or word(s) that the angel shouted. John also hears a response given to the angel's shout by voices of the seven thunders. The identification of the seven thunders is not given, but since there are seven spirits before the throne (the Holy Spirit), it is assumed that the response is from Him. Recall that the Holy Spirit does not speak on His own, but He speaks only what he hears, and will tell what is to come, and bring glory to Christ, John 16:12-15. The thundering denotes judgment as shown in the following passages, 1Samuel 7:7-11, Exodus 9:22-26. Thundering also denotes power, Psalms 29:3-4, Exodus 19:16-19, Job 37:5.

In Revelation 10:4, John is told by the voice from heaven, which is the Lord, to seal up the words of the seven thunders and not to write them down. The voice John hears is similar to when he was told to come up, Revelation 4:1. John's instruction from the Lord is not similar to when Daniel was told to seal his book. There are two reasons for the differences. First, Daniel was not told to "not write" what he saw and heard. Also, the sealing of Daniel's book meant that he was to "officially" preserve the book he wrote for a later time, Daniel 12:4. This is the only time in this book that John is told to seal up the words and not write them, all other times he is to write down the things he witnesses, Revelation 1:11. The words between the angel and the Holy Spirit were intelligible as reported by John, who was about to write them down.

There "MAY" be three reasons for this occurrence of this chapter:

In Revelation 10:5-7, John observes the angel lifting his hands toward heaven. His swearing was in the name of the Lord, which is another reason for arguing against this angel being the Lord for two reasons. First, there is no other name but His for the Lord to swear by, Hebrews 6:13-20. Second, it is the Lord who swears unto Himself to take vengeance on His adversaries, Deuteronomy 32:39-42.

The angel swore that there will be no more delay in the judgments, Mark 13:19-20. There is still the 7th trumpet and the 7 bowl judgments to be poured out on the world's inhabitants. It is declared that the seventh angel will sound to indicate when the mystery of God should be finished. This is the mystery that the Lord had revealed to His servants the prophets. This is probably pointing to the beginning of the mystery revealed by a dream to King Nebuchadnezzar, which God revealed the dream and interpretation to Daniel, His prophet, Daniel 2:19-23, Daniel 2:46-47. It was the Lord who declared that Daniel was a prophet, Mathew 24:15.

As an aside, the mysteries concerning the Body-of-Christ have all been revealed to the apostle Paul and will also be concluded in Christ Jesus, Ephesians 3:2-12

In Revelation 10:8, John hears the voice of the Lord Jesus Christ on the throne, who is is directing all these activities.

In Revelation 10:11, John is told to prophesy again concerning the entire world. Some argue that the events in Revelation regarding the tribulation are limited to the near east region or the areas surrounding the Mediterranean Sea, but this text indicates that it is the world that is being judged.