Interpretations: A Chronological View of Revelation by chapter

The following chart is presented to assist the reader in understanding the viewpoint, or vantage point of the Apostle John in relation to the events that were unfolded before him concerning the Revelation of Jesus Christ. There are four aspects to this chart which are profiled against the basic timeline of the book of Revelation as discussed at the following link, the structure of Revelation.

The first aspect on the following chart is the listing of five vantage points where John views the events revealed to him. The five areas where the Apostle John reports what he sees or hears are:

The second aspect lists the chapters in the book of Revelation in relation to an event's occurrence on the basic timeline and in order of John's vantage point. The numbered squares mostly reference a chapter in the book of Revelation. However, this book is so rich in content that some events described within a chapter may occur in different vantage points. To better discriminate these vantage points within a chapter, the chapter may be segmented into parts with letters to indicate the precedence of the recorded event with its vantage point, followed by the citation of the relevant verses in the chapter. For example, chapter 20 of Revelation has five discrete events described:

A third aspect is the sequence of events along the basic timeline of Revelation. As inferred in the above example, the five events in chapter 20 are shown to occur sequentially, as observed by noting horizontal placement of each of the five boxes, from left to right. Additionally, there are concurrent events that occur throughout the book of Revelation, as shown below with chapter 20a, where other events are described to John in other chapters. Observe that along the vertical axis of the box that describe the events in Revelation chapter 20a, other events occur at about the same time in other chapters in Revelation, such as in chapters 16a, 18, 19a, 16b, 19b, 19d and 19c, though each of these other events occur at different vantage points. It must be noted that due to the coarse time resolution of this chart, some events meant to be shown to occur nearly simultaneously could not be drawn that way as their sequence was very difficult to depict graphically. It was a result of attempting to achieve a balance between clarity of thought against the clutter of the chart. Nevertheless, those sequences are illustrated elesewhere in other timelines as they appear in each of the chapters of Revelation in this site. There are also vertical arrows from heaven pointing to earth, which are only meant to indicated that though John's location is in heaven during the revelation of events in that chapter, he is still observing the events as they occur on earth.

The fourth and final aspect to this chart are the color codes used to describe the basic time divisions along the basic timeline for the book of Revelation. The five basic times, or eras, are:

It is hoped that the presentation of this chart will help reveal to the reader the richness of all that the Father has revealed to us concerning the Lord Jesus Christ through these future events. As shown throughout this site, there are several purposes for prophesy in scripture, as described in webpage, Prophecy. One purpose is to provide comfort and encouragement to the Saints of God, particularly within the context of suffering and persecutions that so many have and will endure. Yet, the promise is that the Lord is coming soon and with unfathomable rewards to those who have kept His word and for their works for His kingdom. 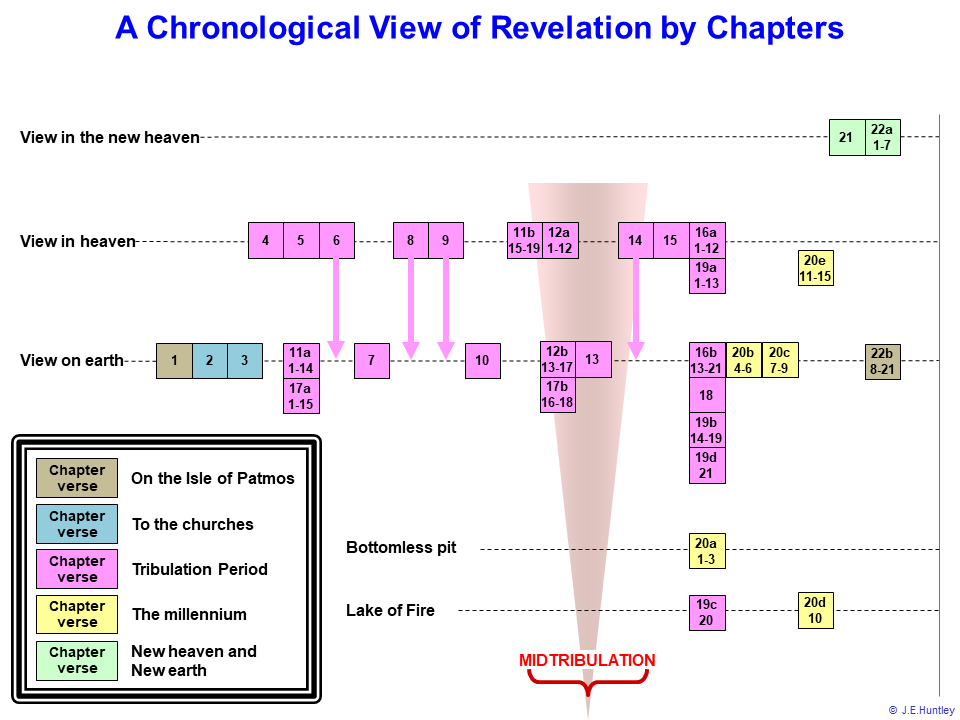