As seen in the chronology of Revelation, John is viewing all of these many events from several vantage points, in heaven, on earth, the bottomless pit, and the lake of fire. The events of this chapter are also contemporary with those described in another page on this web site exploring Revelation 18, the final and complete destruction of commercial Babylon, and Revelation 19, which covers the return of Jesus Christ as King of kings, with His saints, to establish His millennial reign.

This chapter brings to an end the tribulation period with the pouring out of the seven bowl judgments. The pouring of the seventh bowl brings about the announcement that "it is done!" The following is the summary of the bowl judgments, where they were poured upon, and the consequence of the judgment

This is the time when God's wrath, Revelation 16:1, Romans 1:18, is poured out upon a rebellious world. He will pour out His wrath upon all the important environmental controlling factors that affect man's welfare on this planet. The Apostle Paul wrote that in place of God, the natural man has exchanged the truth of God for the worship and servitude to the creature, whether it was Satan or the natural elements on this earth or in solar system, Romans 1:21-25. 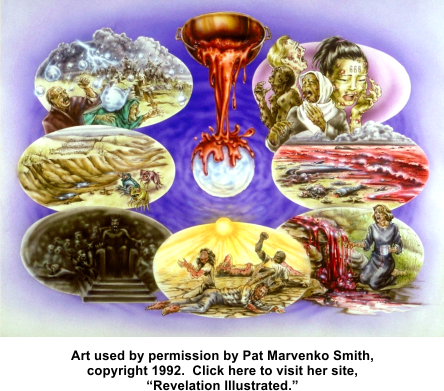 In Revelation 16:1, John heard a great voice out the temple telling the seven angels to put out the bowl judgments, which are worldwide judgments, not partial like the trumpet judgments. Since no one else can be in the temple, this is most likely the Lord talking.

In Revelation 16:2-4, the first three bowls are poured out on the world, which are similar to the plagues on Egypt in Exodus. The 1st bowl affects those with the mark of the beast with boils.

The 2nd bowl affects all of the Earth's oceans and seas, becoming like blood, and killing all marine life, but not the marine vegetation.

The 3rd bowl affects all of Earth's rivers and aquifers, becoming like blood.

Revelation 16:5-7 provides an important interlude to pronounce God's righteousness in His judgments because of their grievous impact on mankind. An angel, who has a relationship with the waters, proclaims:

A voice from the altar where the Tribulation Saints are, confirms the statement of God’s Holiness through all of these judgments.

The main point of the judgment is to force those who shed the blood of God's saints and prophets to only have blood to drink:

The Tribulation Saints who are still living are covered by the blood of Jesus Christ and forgiven of all sins, Romans 8:1-2. The righteous are not under God's judgment and can praise God for His judgment; the Lord Jesus Christ has taken that judgment upon Himself, 1Thessalonians 5:9-11:

In Revelation 16:8-12, the second set of three bowls are poured out on the world, similar to the plagues on Egypt in Exodus. The 4th bowl affects the sun, which scorched the earth. Those seared by the heat curse God, who they know controls the plagues, and they refused to repent. The 5th bowl affects the throne of the beast, and his kingdom was in darkness, Exodus 10:21-23, (for 3 days) Amos 5:18-19, Amos 8:9, Luke 23:44-45 (for 3 hours). The darkness is so dreadful, they gnaw their tongues in agony. They continue to curse God and not repent, Romans 2:2-11.

The 6th bowl affects the river Euphrates, and the waters dry up to allowing the armies from the East to proceed westward against Antichrist's kingdom. An interesting connection with this passage concerning the Euphrates River is the prophecy recorded in Isaiah 11:15 concerning the river, and striking it at the seven streams so that people will be able to cross it dry shod. This is a condition during the first 1,000 year reign of the Lord Jesus Christ on earth. The river is not identified in scripture, but modern translations have interpreted it to be the Euphrates. If it is, it would ironic to see the use of this river to affect a military outcome. The first is when the Medes and Persians were attacking Babylon. In order to take the city, they diverted the river to draw down the water level that flowed under the city walls and through the city. In this future event, God will similarly diminish the river's flow so that the vast army from the east can progress westward unimpeded.

In Revelation 16:13-14, a response to this unanticipated threat, Satan, Antichrist, and the false prophet issue out the orders and enticements throughout their kingdom to assemble a great army at Armageddon to meet the 200,000,000 man army from the east. The messengers are described as unclean spirits that come from the mouths of these three, and appear as frogs, which are detestable to Jews, Leviticus 11:10-12. These messengers are called demons, which confirm the satanic nature of the Antichrist and the false prophet. These messengers perform miraculous signs, which are their sign or badge of authority that they speak for the unholy three, Revelation 13:13. They convince the leaders of the world to assemble their forces under the Antichrist too battle the approaching army from the East, and ultimately against God. This will be the time described by the events following the opening of the sixth seal, Revelation 6:15-17.

In Revelation 16:15, the Lord characterizes "His second appearing" to a thief, in that one will not know exactly when he will come. The message is given to those who have a relationship with the Lord through faith in the Lord Jesus Christ. They are encouraged to remain in the Lord by staying awake and keep their clothes with them, (clothed in the righteousness of Christ, and not vexed as Lot, 2Peter 2:7-8). The consequence is to be shamefully exposed for their lack of faithfulness and succumbing to the seduction of the world. This is not to the church, since it was already raptured, 1Thessalonians 5:4-11. At the end of the great tribulation, there will be those whose belief in Christ Jesus with a commitment and anticipation of His return that will be like those condemned in the letter to the Laodicean church, Revelation 3:14-22, or as the warning to the church today, 2Thessalonians 3:14-15, 1Thes 2:12. Recall during the Olivet Discourse that Jesus characterized His return the same way, Matthew 24:42-44. The Lord equated the time of his return to be similar to the days of Noah, when they lived their lives as normal, and did not know of the judgment of the flood until it happened, and then it occurred and there was no relief for them. Three parables given by Jesus during the Olivet Discourse are analogous to the day of His return and the establishment of His millennial kingdom: Matthew 24:45-51, the ten virgins, Matthew 25:1-13, and the servants who were to account for the talents they were given, Matthew 25:14-30.

In Revelation 16:16, is the description of the battle of Armageddon. There may be a time interval of months between the 6th and 7th bowl judgments in order for all of the other world leaders to move their men and equipment into position under the Antichrist's authority, as experienced in the recent wars. With the blowing of the 6th trumpet, the four angels bound at the great river Euphrates were released, Revelation 9:13-16. They were kept for this very hour, day, month, and year. They are responsible for killing a third of mankind. Since this army's formation until this time, was to make its way westward to fight with Satan, a battle line with about 1/2 billion men and women, Revelation 9:14-19, 16:12-14. But it will be Christ Jesus who will prevail over His enemies with His appearance and by His word, Matthew 24:37, Luke 21:27.

There will be an extremely long battle front between Anti-Christ's forces, where the 200 million man army will be engaging them, and where Christ will destroy them. This front will extend from the northern point in Armageddon, Revelation 16:16, through the east side of Jerusalem, and down to Edom. The battle front will be through the valley of Jehoshaphat, or now known as the Kidron Valley on the east side of Jerusalem and west of the Mount of Olives, Joel 3:2, Joel 3: 12, and to the southernmost point near Petra, Isaiah 34:1-5, Isaiah 63:1.

This will be the worst battle ever. Since the forces from the East number 200 million, it is most likely that the beast's forces will at least be of equivalent strength if not greater in manpower. The net result is that approximately 1/2 billion men and women will be meeting in this battle arena and will be slaughtered. This will also be the time spoken of in Daniel who defines the end of the gentile era, Daniel 2:42-45.

There are many instances in scripture where Satan is characterized as a liar, murder, who leads the whole world astray. As Satan sends out the frogs, his intent is not just to rally the troops, but to destroy or even cause God to change His plans. Satan seeks to destroy the world with the advance of the 200 million man army and he has no concern or desire over mankind; Satan hates us.

In Revelation 16:17-18, the last bowl is poured out into the air, and a loud voice from the throne proclaims that it is done! The voice is God's since this comes from the throne. The three times when the Lord announces "it is done" or "finished" is when He finished the work for the remission of the world's sins, John 19:30 (then the hope of the resurrection for His saints came after Jesus was raised from the dead). Second, when the judgment of this world is complete, Revelation 16:17 (then afterward the millennial reign of the Lord Jesus Christ would begin). Third, the dwelling of God is now with men, Revelation 21:3-6 (then the new heaven and new earth for all the righteous in Christ to enjoy). Following each of the three declarations "it is done" came a new and glorious fulfillment to all believers and followers of the Lord Jesus Christ to enter into an intimate and rich relationship with Him, to be resurrected unto the Lord, to rule and reign with Him in His earthly kingdom, and to be with Him for all eternity enjoying the place he as prepared for us, John 14:2-3.

After the proclamation, John records that there were flashes of lightning, rumblings, peals of thunder, a severe earthquake, which is are affects felt worldwide, not regional as normally occurs.

In Revelation 16:19, the great city (some say it is Jerusalem (preferred), others the city of Babylon) is broken up into three parts. The cities of the nations collapsed and Babylon is given her cup filled with the fury of God's wrath, Daniel 2:42-45.

In Revelation 16:20, the world's topography changes significantly. Every island fled away, and mountains could not be found.

In Revelation 16:21, huge hailstones of about 100 pounds each, fall upon men. The enemies of God continue to curse God because of the hail and the plague was terrible. No further reference of the tribulation temple, than that in Revelation 11:1-19 is given. A detailed description of the millennial temple is listed in Ezekiel 40-48, and it appears at the beginning of Christ's reign. Therefore, it is anticipated that the tribulation temple is destroyed with the falling of the enormous hail stones.

To view the devastation of all these judgments upon the world's population, follow this link to the compressed view of the judgments.