The timelines used on this site are intended to aid the reader in understanding the order, extent, and concurrent events that are presented in the many prophetic passages in the Bible. The reader is encouraged to see the webpage, a survey of timelines, used on this site.

Timelines used in this website are general in nature. Every effort has been made to assure their accurate depiction of the prophetic passages. However, there are instances where attempting to be precise is unattainable with the tools available and due to the rise of clutter on the charts. There is a delicate balance between clarity versus content and detail that has been evalated on the charts. One scheme is the use of building charts, showing a single concept on a base chart then adding it to an aggrated chart of all the concepts in a chapter or book of the Bible. Since these are generalized timelines, in many cases, intervals of time along the horizontal do not portray equal intervals of time, only the relative occurrence of one event with another. In all cases, it is incumbent upon the reader to search the scriptures out for him or herself, and evaluate the content of this site or any other source against what the Word of God says.

As with all timelines, the following graphic is a start on which many other timelines are built upon. It is a very simple horizontal bar, based on the book of Daniel.

The book of Daniel is a critical book for the understanding prophecy in much of the Bible for many reasons. First, the Lord revealed to Daniel, King Nebuchadnezzar, and to all peoples, His plan for the ages. Beginning with Daniel 1, Daniel as a young man is carried away with other well-learned and skilled men and women away from Jerusalem to Babylon. After some years of training, Daniel and his fellow Jews, and friends, completed their training and were matriculated within the Babylonian system of advisors to the king. God placed them where they would have influence and access to spread the knowledge of God and His ways across the gentile nations. It is speculated that the wise men that journeyed to worship the young Jesus after His birth, were aware of the prophecies because as Magi, they would have been aware of the prophecies that Daniel imparted to that elite group centuries earlier. Second, Daniel 2 provides tremendous revelations concerning major future kingdoms that did not exist at the time the prophesy was revealed to Daniel by the Lord. These were and are kingdoms that would follow Nebuchadnezzar's kingdom. Why were there only four kingdoms identified in this prophesy? Why was the revealed prophetic timeline truncated? The introduction of God's plan for the ages began with King Nebuchadnezzar's military conquests against Judah and Jerusalem, and the destruction of the temple. This prophecy of the ages did not begin with Assyria, Egypt, or other great historical kingdoms that had influence and conquests against Israel. This brings into focus the third great reason why the Book of Daniel is important as a key in understanding prophecy. Though the northern tribes had already been taken captive by the Assyrians much earlier than Nebuchadnezzar's conquest against Judah, the keys to understanding and interpreting prophetic passages in scriptures is tied to the people of Israel, Zechariah 2:8-9, and the land God covenanted to them, Genesis 15:18-21, Jerusalem, Jeremiah 3:17-18, and the temple, 2Chronicles 7:16. Of course there were other great world dynasties, such as in China, or dynasties on other continents in the world that are not considered in the timeline, since they neither trampled underfoot, nor either controlled or significantly influenced the affairs in Jerusalem. To elaborate further that Jerusalem as a key in understanding prophecy, it is brought out in the prophetic timeline revealed to Daniel by the angel Gabriel, Daniel 9:21-25, in which the 70 prophetic weeks (490 years, see this discussion in this site on Daniel 9) begins with the order to restore and build Jerusalem, not just the temple. As shown in Daniel 2:36-38, the era of the Gentiles began with the three military campaigns of King Nebuchadnezzar against Jerusalem, and it will fall, Revelation 18:2, and its end will occur with the return of Jesus Christ to establish His millennial kingdom in Jerusalem, as shown in Revelation 19:11-21 with the Lord's return and in Revelation 20, which is the Lord's reign on earth.

The following graphic builds upon the basic timeline above, and illustrates critical historical events and prophetic events yet to occur relative to the church age. At the date of this writing we are still in the church age, and serves as a reference point to much of what is written in this website. As shown in the Lord's first earthly ministry, He said that Jerusalem would continue to be trodden down by the Gentiles until their time was fulfilled, which again is the end of the seven years of tribulation, Armageddon. This is the time of the Lord's return for His second advent, but at that time He will not be a humble servant as during His first advent, but as King of kings and Lord of lords. The times of the Gentiles is shown by the solid red arrow from left to right between the yellow oval with the scriptural reference to Luke 21:20-23, and the quotation of the scripture that appears in the yellow box. The right arrow head indicates the fulfillment of the Gentile age. 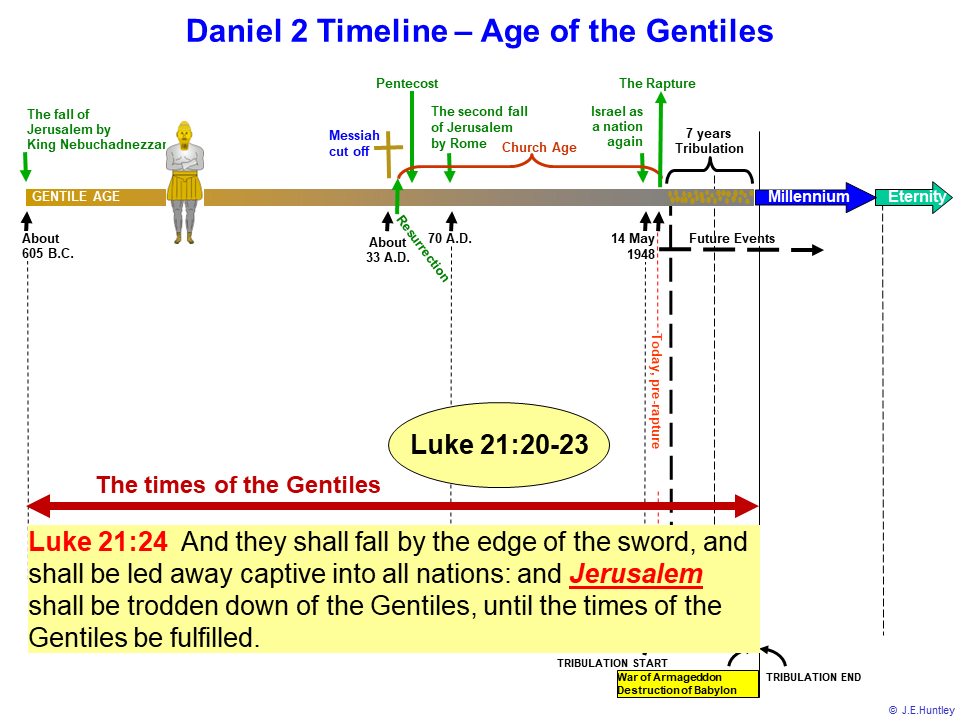 To aid in a broader understanding of how the book of Revelation fits within this timeline construct, the following graphic provides four basic timeframes that the book may be divided logically in a sequential order. The update to this version of this website is the understanding that the church began on the day of the Lord's resurrection. Also, Since the Book of Revelation is a prophetic book, and for other reasons listed in the page on this site, church summary, the graphics and explainations have been modified from previous versions of this site to show that the New Testament church began on the day Jesus rose from the dead, and that the seven churches referenced in the book of Revelation, are the reconstitued Jewish churchs, right after the snatching away (rapture) of the New Testament church. As a result, Revelation chapters 1-3 cover the period of time immediatley after the snatching away (rapture) of the New Testament church, and will continue until the Lord returns in His glory, Revelation 19:11-21. However, much of what was written to the seven tribulation churches is relavent to today, as Paul wrote to Timothy, 2Timothy 3:16. This is why the yellow arrow for the churches is faded before the snatching away (rapture) of the New Testament church. Revelation chapters 4-19 cover the time that cover the seven years of tribulation, ending with the battle of Armageddon, and the Lord's return. Revelation 20 covers the Lord's millennial reign, and Revelation 21 and Revelation 22 cover eternity future after all sin and unrighteousness have been dealt with permanently. 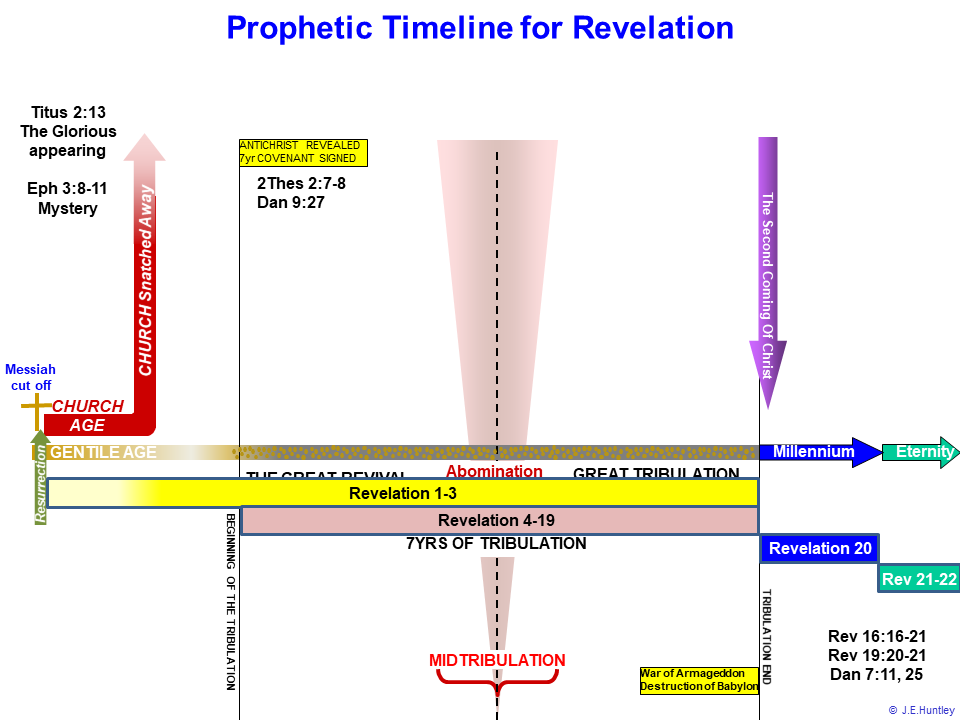 The following two graphics are an extension of the timelines above, but they have been simplified to remove the time references, and provide a focused view of the events within the New Testament era, from the cross through to eternity future. For Revelation 2 and Revelation 3 the timeline is further stretched to highlight the seven churches and their era, which begins at the day of Pentecost, and ends with the rapture of the church. To provide a context, the following is a base timeline for Revelation and is explained in the section of this site describing the basic structure of Revelation. This timeline illustrates some basic sections in the book of Revelation.

First is the main horizontal bar that changes color from gold to an iron color, which are similar colors as revealed to Daniel by God, in Daniel 2. The colors on the bar, starting with gold and transitioning to iron (or gray), is only used to draw that distinction to the reader. However, a precise rendering would show an iron color during the age of the cross, fading to clear with the passing of the Roman empire, then become an iron color spotted with earth tones to represent the reformed Roman empire during the tribulation period and slightly before. The first three colors of gold, represents King Nebuchadnezzar's era, and silver, represents the time of the Medes and Persians, and the brass represents the era of Greece's rule, which have already passed on the pages of time. Based on Daniel, this horizontal bar represents the age of the Gentiles, which will last until the Lord returns, Revelation 19:11-14. At that time He will establish His kingdom on earth, Revelation 19:15-26, Revelation 20:4-7, rule with an iron scepter, Psalms 2:9, and to reign for a 1,000 years, or a millennium, Revelation 20:6, which is represented by the blue arrow. Thereafter, will be the beginning of future eternity, when those who were justified by their faith in Jesus Christ, will be with Him and in the presence of the Father and Holy Spirit for eternity. The unjust, who rejected the revelation of Jesus Christ by the Father, are cast forever into the lake of fire, Revelation 20:15. This event is shown with a green arrow.

Second, there are the segments along the time of the Gentile age that identify significant events since the Lord’s first advent. From left to right, there is the identification of the church age shown in a red horizontal bar, and some scriptural references. The church age ends with the rapture of the church, which is indicated by the vertical red arrow. A span of time is shown following the rapture of the church to the next vertical line, which indicates the beginning of the tribulation. The tribulation does not begin with the rapture of the church, rather with the signing of the seven year covenant between Israel and the government whom the Antichrist represents, Daniel 9:27. That event will occur simultaneously with the event in heaven with the Lord, represented as the slain Lamb, as He opens the first seal of seven, to reveal the man with a crown on a white horse, Revelation 6:1-2. This event is further highlighted with the yellow box at the top of the graph, with some scriptural references. The seven years of tribulation follows, which is also broken into two 3 1/2 year periods. The event that dramatically separates the two periods of time is the indwelling of Satan in the Antichrist, Revelation 13:1-4. There is a sudden and catastrophic end to the tribulation period which occurs at the battle of Armageddon.

Third, the catastrophic change on earth is shown in the horizontal bar with the abrupt change to a blue arrow labeled Millennium. The event separating the Gentile age with the millennium is vertical line labeled tribulation end, with a yellow box at the bottom of the graphic labeled Armageddon, with some scriptural references. It is at the time of the battle of Armageddon when the Lord will return to this earth with all of His saints to conquer His enemies and establish His kingdom, Revelation 19:14-21.

Fourth, there is a season of time when Satan is allowed to roam the earth again following the first 1,000 year reign of Christ's eternal reign. During that time Satan will seduce an innumerable multitude of people alive during the millennial reign of Christ to rebel against Him and His kingdom. God will end all rebellion with fire, cast Satan into the lake of fire and setup the Lord's great white thrown judgment, Revelation 20:7-15. This event will separate the just from the unjust for eternity. Thereafter, eternity future is shown in the horizontal blue-green arrow, Revelation 21:1-27 and Revelation 22:1-21. 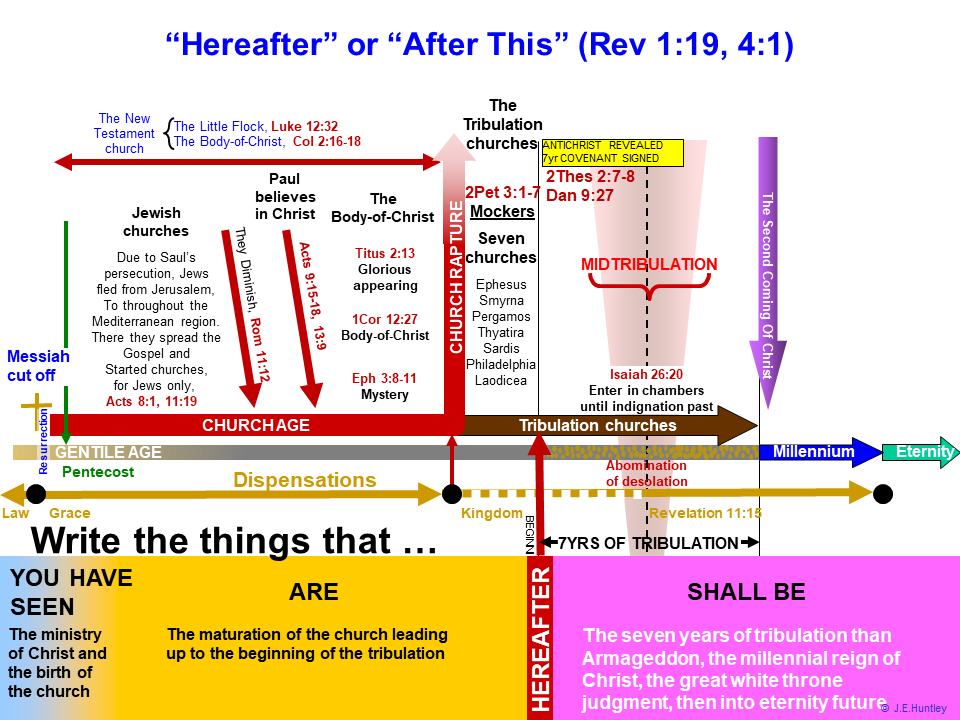