As seen in the chronology of Revelation, John is viewing these events of this chapter from heaven and observing the affects on earth.

In Revelation 9:1, John hears the fifth trumpet sound, and then observed a star falling to earth. Stars are associated with angels, and this star (angel) was given the key to the shaft of the Abyss. There are some differences about the identification of this angel. Isaiah associated Satan with the morning star, Isaiah 14:12-15. As a result, some believe that this star in Revelation represents Satan. However, it may be more appropriate to associate this star with an angel who is of the Lord. This same angel is seen again later in Revelation who chained and threw Satan into the same pit, Revelation 20:1-2.

The star (angel) is seen falling to earth and given the key to the shaft of the Abyss. It is not necessarily true that this is a physical door or object that this key unlocks. Rather, the key is evidence of one owning and having authority of a thing. There are other examples of keys in scripture.

What the angel unlocks is the entrance to the shaft of the Abyss. This is part of what in Hebrew is call Sheol, or in the modern vernacular, hell (hades). Before the resurrection of Christ Jesus, there were several compartments in Sheol. Two of them were described by Jesus in his story of Lazarus and the rich man, Luke 16:19-31. He said there were two compartments, one was paradise where the righteous went, represented by Abraham, Genesis 15:6, Luke 16:22, the other was a place of torment, Luke 16:24. There was also a large gulf that separated the two compartments that was impassable, Luke 16:26. This gulf, led down to the compartment called Tartarus, a word used only once in scripture. This is the place where rebellious angels are kept for the day of judgment, 2Peter 2:4, 1Peter 3:18, Jude 1:6, (Luke 8:30-31). The fourth compartment is Gehenna, the lake of Fire, which is at present is empty. The first two occupants will be the Antichrist and the false prophet who will be thrown into the lake of fire, Revelation 19:20, by Christ Jesus on His return with all His saints at the end of the seven years of tribulation, Revelation 19:11-16.

The lake of fire, or Gehenna, was represented by a valley outside of Jerusalem that was always burning and where trash and unclaimed bodies were thrown for their ultimate disposal. This is also the place where all the unrighteous who appeared before the great white throne for judgment, and whose names were not found in the book of life, were thrown into for eternity future, Revelation 20:11-13, 15. Hades and death will be the last things to be thrown into the lake of fire, Revelation 20:14. This is not a place of annihilation, but eternal suffering.

In Revelation 9:2, John observed smoke rising from the Abyss when it was opened. Something not to miss is that with a change in the spiritual realm came a response in the physical world we live in. John saw a physical impact with this event, the sun and sky are both darkened, in addition to the 1/3 of the day and night that was already darkened by the blowing of the 4th trumpet, Revelation 8:7, 12. All of these judgments are cumulative in nature. A small recent geologic impact on all western Europe was the Iceland volcanic event in 2010, where air travel ground to a halt for an extended period of time, and the airline industry suffered severely. 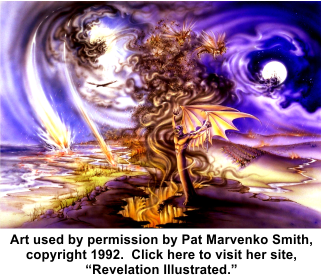 A very important point to stress is that those who were sealed, the 144,000 from the tribes of Israel, Revelation 7:4-8, and tribulation saints are not subject to the judgment of God directly. Similar to Job, the Lord will have a hedge about His own, and will not allow these instruments of His judgment to harm them Job 1:8-10. Another similar event occurred in scripture when Israel was spared from some of the plagues against Egypt, Exodus 8:21-23.

In Revelation 9:5-6, the locusts were further restricted in what they could and could not do. They were not given power to kill the men without the seal of God, but to torture them only for a period of five months. Those stung by these creatures will suffer a terrible pain. As a result, they will seek death, but death will be taken away, Revelation 9:6, (it is Christ who holds the key of death, Revelation 1:17-18). Though not stated explicitly, it may be that if a person were to believe in the Lord and convert his life over to Him, that he would be relieved from the pain and suffering from this judgment, Jeremiah 18:5-10, Ezekiel 18:30-32.

Just as in the days preceding the Lord's commencement of his earthly ministry, John the Baptist proclaimed the coming of the kingdom. This will be the same message proclaimed during the tribulation, Matthew 3:1-3. Recall that repentance with Godly sorrow leads to salvation, 2Corinthians 7:8-10. Why five months for this judgment upon unrepentant men and women? This number is usually associated with repentance, in this case through judgment rather than through grace. The church is in the age of grace, Isaiah 26:9-10.

In Revelation 9:7-11, are real, the features relate to a physical capability they possess a nature to organize affectively. This is not a mindless army, but it has purpose and under direction of a king among them. John records the name of the king, Revelation 9:11. In Hebrew the name is Abaddon, in Greek his name is Apollyon. This evil angel’s name indicates attacks by the locusts will be on both Jews and Gentiles who are not sealed by God. These descriptions are not allegorical as some would argue.

In Revelation 9:12, John writes that after the completion of the fifth trumpet that the first woe is past. Recall that three woes were announced in Revelation 8:13 after the fourth trumpet blast. The angel announced that there will be three woes to the inhabitants of the earth from the remaining three trumpet blasts that are yet to occur: the 5th trumpet (demonic locusts), 6th trumpet (release of the four angels bound at the river Euphrates), and 7th trumpet (announcing the seven bowl judgments). These last trumpet judgments occur before the mid-tribulation point. They herald the beginning of the second half of the tribulation. 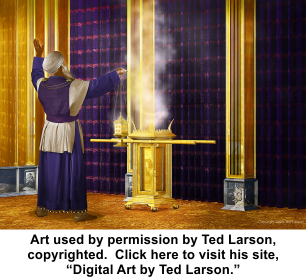 In Revelation 9:13, the sixth angel blasts his trumpet. A voice from the horns of the golden altar before God was heard. This is what Moses saw when he was commanded of God to construct the same thing for the presentation of prayers for the people before the Lord, Exodus 30:1-3. On the earthly temple the altar was before the curtain that separated the holy place from the holy of holies, but in heaven it was on the other side of the curtain, Hebrews 9:1-4.

In Revelation 9:14-16, the command was given to release the four angels bound at the Euphrates River. These angels have a divine appointment made by God, as Gog and his confederates have when they invade northern Israel in another war as recorded in Ezekiel 38 and Ezekiel 39. The appointed time for these four angels is for a specific hour, day, month, and year; the battle of Armageddon. These angels will be responsible for killing 1/3 of mankind. This in addition to the pale horse revealed by the opening of the fourth seal, account for 1/4 of the world's population being killed during the tribulation. These four angels are the lead for the 200,000,000-man army from the east. To see an abstraction of the totality of the tribulations impact on the human population at that time, follow the link to a compressed view of the tribulation.

In Revelation 9:17-19, the characteristics of these four demonic angels are given:

A comparison of the six trumpet judgments that has been revealed to this point is seen in the following link. That chart displays the ten plagues of Egypt in comparison with the opening of the seven seals, the blowing of seven trumpets, and pouring seven bowls, plagues and tribulation judgments.

Paul spoke of this contrasting the Christian life to the sinful man in Galatians 5:19-24.