Revelation: Chapter 19 - Possible Incursion Routes to the battle of Armageddon

If there is any measure on how close we are to the beginning of the tribulation, apart from scriptural references, then could it be how events recorded in Revelation can be implemented today? Consider the events of WWII and how some questioned if that period would be the beginning of the tribulation. Yet, neither the capability of near instantaneous communications around the world nor our current computing capability existed. Nuclear capabilities were still on the drawing board and its deployment, impact of use, and tactical capabilities for warfare were relatively unknown. Compare that time to today, and it becomes readily apparent that with our current technology, little effort is required to see how these events could take place. In fact, with the great expansion in biological and technological advances, and the explosion of new knowledge, anything recorded in Revelation that seems difficult today may be easily attainable in just a few years.

It is stressed, however, that the true answers for how all will be revealed during these end times is in Christ's hands. We must always keep our mind on what has been written in scripture. Many of the details concerning the events in Revelation are not provided. But the events and their durations which are written of, are referenced graphically with timelines in this website. These illustrate the occurrence and duration of specific events as written in Revelation, in addition to the concurrent events which have either already begun (i.e. the church age), or will soon begin. For example, compare three specific events, the sixth seal, Revelation 6:12-17, the sixth trumpet, Revelation 9:13-19, and the sixth bowl judgment, Revelation 16:12, all of which relate to the war of Armageddon. It is thought that the sixth seal is broken near the beginning of the seven year tribulation period, but its complete manifestation occurs at the end of the tribulation with the second coming of Christ at the battle of Armageddon. With the blowing of the sixth trumpet, the world is introduced to the 200,000,000 man army, and the power they possess to use against any opponent. In fact, they account for the deaths of a third of mankind, or in today's population figures, more than two billion people. This passage does not indicate an instantaneous impact, but the beginning of an event that will carry through to the end of the tribulation period and for a specific purpose as shown in verse 15 above. Now consider the next passage:The pouring of the sixth bowl judgment could make one wonder what importance of this judgment has on the world, until you consider the westward advance of a vast army. Without this river being dried up, it would to take a considerable amount of time for an army of this strength to breach this natural barrier, Revelation 9:15.

In a completely speculative attempt to apply some of today's understanding on how these events may occur, let's look further at the references to the 200,000,000 man army. There are several attributes associated with this army. One is its destructive force, which apparently includes the use of nuclear weapons before and behind the advancing army. Second, this army accounts for the deaths of 1/3 of the world's population. Of all of the nations today, only China boasts of having such military strength. What may also be of significance is the possibility that China's military leaders may have the belief of being able to absorb nuclear attacks with such a huge number of military members in their ranks. Therefore, their use of tactical nuclear weapons may not be abated. Finally, they have an unstoppable quality, Joel 2:2-10.

Further, other than China, there is no other densely populated region in the world today where this army could impose such devastating destruction than south of the Himalayan Mountains. This region (India, Pakistan, and Bangladesh) barely exceeds China's total population in excess of one billion people based on current population estimates. Therefore, it appears that China will be conquering and destroying all of the neighboring countries before making their westward march, in order to get to the magnitude of deaths prophesied in Revelation. The following map illustrates possible incursion routes on their westward march that may explain how these events could unfold. 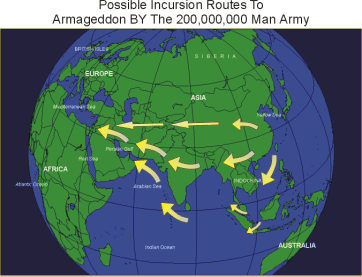 It is believed that only two world military powers will exist during the tribulation period: the forces of Antichrist and the 200 million-man army possibly from China. It may be that the world's naval strength will be split between these two groups. What the chart above illustrates are the possible routes taken by this massive force in the East. If China has a significant naval force at that time, they could provide logistical and strategic support to the south of the main force, and proceed to the Persian Gulf.

The main body would advance south of the Himalayan Mountains, killing everyone along its path, and foraging for supplies along the way, passing south of the mountainous region as they proceed westward. The third force could advance on land north of the Himalayans to protect the northern flank of the main body of this army. The northern flank could pass through the Khyber Pass from Tibet, killing and conquering as they pass through Northern Pakistan, Afghanistan, and Iran, then through Iraq, Syria and Jordan to their final destination, Armageddon. Though it is expected that a substantial part of the Russian military strength will have been decimated by this time, according to Ezekiel, they will still have a force that the eastern army will need to guard against. If nuclear weapons are being used, it would not take much to see the potential carnage on the affected populations.

As the three prongs work westward, the naval branch could disembark the southern force in the Persian Gulf. It could then march toward the southern point of the final battle front of Armageddon in the region of Southern Israel. The central force may advance and destroy Babylon, then proceed toward Jerusalem. The Northern force will probably advance through the fertile valley of Mesopotamia, then on to engage Antichrist's forces most northern extent at Megiddo. The following chart may help illustrate this event. 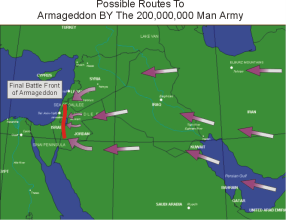 As mentioned earlier, the sixth bowl judgment facilitates the army's westward movement by drying up the River Euphrates. This event precipitates a reaction by Satan, the Anti-Christ, and the false prophet as disclosed in Revelation 16:13-14. As the massive army moves toward Jerusalem, the worship center for the Antichrist and Satan, the Antichrist is forced to respond to defend his territory as mentioned in the verses above. He, Satan, and the False Prophet send lying messengers to all of the world's kings under their control to assemble their forces and deal with this threat from the East, Revelation 16:16.

It is also interesting to note the world conditions which will exist at this battle. In Revelation 16, there is a list of all the 7 bowls of wrath. The first were painful sores upon those with the mark of the beast or who worshiped the beast. The second bowl caused death to every living thing in the sea. The third bowl turned the rivers and fountains of waters to blood. The fourth was great heat being produced by the sun. The fifth bowl was darkness upon the throne of the beast and his kingdom. Finally, the sixth bowl dried up the Euphrates River. All of these show a condition in the world which is unmatched by any thing else in recorded history. The situation is terrible and unlivable. So when the Antichrist's forces meet with the 200,000,000 man army, it will be amazing that they will function at all.

Finally, at this very late time in the seven years of tribulation, there will be four prominent groups of people in the world: first, the Antichrist and the kingdoms which follow him, second, the 200,000,000 man army from the east, third, the remaining tribulation saints who are being warred upon by the Antichrist and False Prophet, and fourth, the remnant of Israel (only 1/3 of those who were alive at the beginning of the tribulation) who fled to the wilderness and are protected by God during this entire last half of the tribulation period. The last two groups are the followers of Christ, and the others are His enemies. The tribulation will force everyone to make a deliberate choice, which has eternal consequences for each individual.

As mentioned in previous pages, God is omnipresent so this will not be a protracted battle. The Armageddon war will have a simultaneous end along the entire 180-mile battle front. In fact, it ends as soon as it starts. The actual unfolding of this battle is not explicitly foretold, except the outcome, which is Christ being the victor. What is written in Revelation about this final sequence of events is that the False Prophet and Antichrist will be taken and thrown directly into the lake of fire. Thereafter, all that remain in this battle are slain, there are no prisoners of war, or any that will escape, Revelation 19:19-21.

Whether or not the earthly forces made up by the Army from the east and Antichrist ever engage is not important. What does happen, is that when Christ and his saints appear from above in the clouds all eyes on the battlefield will look onto him, and will attempt to unite and fight against Christ and his saints. Remember that Satan already lost one battle which kicked him out of heaven permanently, and the four evil angels are probably also against God. So the forces that follow them will most likely possess the same spirit of rebellion against God, which will unite them in this last battle. As depicted in Revelation 19, Christ will be dressed for battle, and a double edged sword will proceed from his mouth, Hebrews 4:12, Ephesians 6:17, Isaiah 11:4. In other words, the battle is over with upon his arrival. He will defeat his enemies by just his word. The is further illustrated when in the Garden of Gethsemane, when the guards who came to arrest the Lord fell to the ground after Jesus answered their question saying "I am He", John 18:4-6. If the guards were affected by just the word of Jesus when he first appeared on Earth as a Lamb, just think what his word will do at his second coming when he appears in judgment.

The end of the Armageddon war will be swift and complete, as shown in the previous paragraphs and the sixth seal in Revelation 6 above. As soon as the battle is won, the seventh bowl is poured out, Revelation 16:17-21. This last judgment, and the reaction revealed in the 6th seal in Revelation 6:12-17 above, reveal the horror that will befall the enemies of Christ at this last battle, yet they will continue to blaspheme God. It is incredible how hard the heart of man can become against our God, who created all things and provided a plan of salvation for all.

Again, the scenario on this page is a purely hypothetical exegesis of what is written in scripture. This attempt illustrates that within today's capabilities, with a change in the world's geo-political structure as revealed in scripture, it is not hard to see how these events could take place. The steps to accomplish these things are very small compared to just the recent past, such as WWII. So now is the time to accept Christ as your savior. Do not delay such an vital decision. Click on the link "Salvation" located at the top left of this page for information on this very important subject of salvation.