As seen in the chronology of Revelation, John is viewing all of the events from the vantage point in heaven.

As a preface to this chapter, recall that God does not desire that any should perish but come to repentance, His patience is beyond measure, 2Peter 2:8-9, John 3:16-18.

In one of Isaiah's many prophesies, he spoke concerning the conquering of Judah by the Babylonians in Isaiah 13:1-8, then suddenly transitioned to this time period that is described in Revelation 15 and Revelation 16, which is the pouring out of God's wrath, Isaiah 13:9-13.

As seen in other parts of this book, Revelation 15 and Revelation 16 end the great tribulation and usher in the millennial reign of Christ, which will be described in Revelation 20:1-15. The ramp up to the outpouring of God’s wrath was seen in Revelation 14:1-20, where:

However, Revelation 17:1-18 and Revelation 18:1-24, regress back into the tribulation period to describe discrete events that provide a fuller understanding of the magnitude and completeness of God's judgments upon Satan, the Antichrist, false prophet, religious Babylon and commercial Babylon. Nothing is left untouched by God's judgment that has not already been settled by individuals who made the decision to be covered by the blood of Jesus Christ by believing on confess that Jesus Christ is Lord, Romans 10:8-13.

This great and marvelous sign John observed is real, and is the manifestation of the wrath of God upon an unrepentant world, with three sets of sevens, where:

God is purposely driving these final events to fulfill His promise to His Son, to make His enemies His footstool, Psalms 2:5-8, 110:1-2. 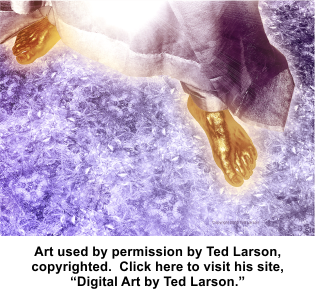 There is another pause of events in Revelation 15:2, where the focus shifts to those who had victory over the beast, his image, mark and the number of his name. John observed a sea of glass mixed with fire in heaven. Recall the other references of the area surrounding the throne of God that are depicted in scripture, such as Exodus 24:8-11, Ezekiel 1:22, Daniel 7:9-10, Daniel 7:13-14, Isaiah 6:1. In Revelation 4:2-6, John did not report seeing fire mixed in the sea of glass as evidenced here. John saw that the sea of glass was mixed with fire, which may indicate the trials that the tribulation saints endured in their physical state, 1Peter 1:7-16. Despite observing many other living beings before the throne of God, now John only observes the tribulation saints beside the sea, but not on it.

The tribulation saints were victorious over the beast, his image, and the number of his name. Their victory is eternal, and they will now have their vengeance as voiced in the opening of the sixth seal, Revelation 6:9-11. They were horribly tormented in order to make them deny Christ during the last half of the tribulation; Revelation 13:15-18, Revelation 14:12-13. However, the condition that they exhibited was patience in keeping the commandments of God and faith in Jesus Christ. The angel announced that blessed are those who die in Christ's name. Death is now foreign to them, 1Corinthians 15:55-58. The tribulation saints are to serve God day and night in His temple, Revelation 7:14-17. It was the Lord who wrote to the seven synagogues/churches in Revelation 2-3, to prepare them for these terrible times, and give them encouragement to endure, i.e., Rev 2:10-11, 17, 25-28, Revelation 3:5, 10-11. The breadth of the victory is further illustrated through passages written by the Apostle Paul, Colossians 2:6-15, we are made alive in Christ, Philippians 4:11-13, we can do all things in Christ, and 2Timothy 2:11-15, God is faithful. Only the tribulation saints stand on the sea of glass to witness God’s vengeance upon His enemies, and they had harps of God to sing His praises for their victory. 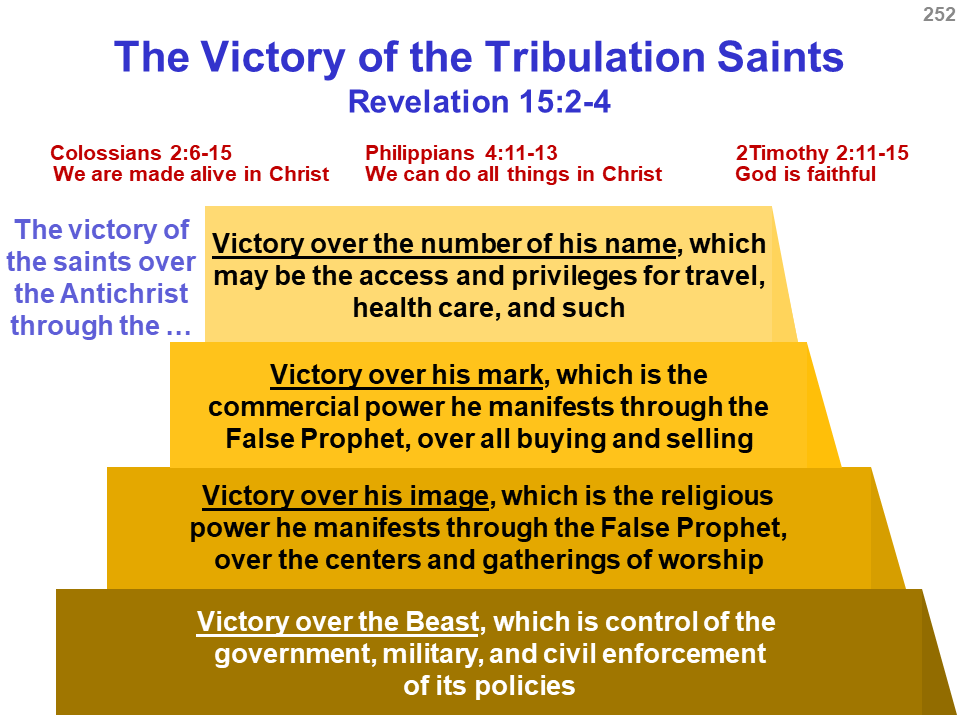 In Revelation 15:3-4, John hears the tribulation saints sing two, and maybe three songs. One is the song of Moses, which is a responsive celebration to the magnificent and awesome delivery from Pharaoh's chariots at the Red Sea, Exodus 15:1-19. For the tribulation saints, they are celebrating the promises fulfilled by the Lord in the eternal life that they are enjoying, a life of fullness and perfect. A second song by Moses was his farewell song to the children of Israel, replaying God's great glory and His work through the nation of Israel, Deuteronomy 32:1-44, note Deuteronomy 32:41-44. This could also be sung by the tribulation saints as they recount the many times the Lord intervened on their behalf during their life in the tribulation, and in particularly, how He sustained them during their many trials and persecutions, Isaiah 26:9-10. The Lord encouraged the saints at the church of Smyrna who were under severe persecution from Caesar worship to be faithful unto death, and He promised them a crown of life, Revelation 2:8-11. Also, as the Lord sent out His disciples to preach that the kingdom of the Lord was at hand, he also looked forward to this time, the seven years of tribulation, where the saints would be hauled before the government for prosecution for the saint's belief in Jesus Christ. The Lord, however, provided encouragement, (but the promise of deliverance from prosecution) to those who suffer such things that the Holy Spirit would provide the words to say in the hour of the persecution, because at that time it will not be you, but the Father speaking through you to those who pass judgment upon you, Mathew 10:16-20. It would come by the Holy Spirit. The tribulation saints also sing the song of the Lamb. This is a song describing the victory won by the saints through Christ, and in response to the glory they now witness in His presence. This song overshadows all that is left to happen in this final part of the great tribulation, and the beginning of the millennial reign of Christ; all nations will come and worship the Lord as His righteous acts have been revealed. 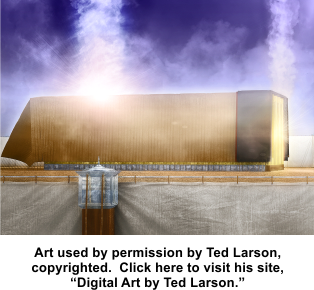 In Revelation 15:5, John again observes that the tabernacle of the Testimony, and he sees that the Holy of Holies, was opened. During the Old Testament times when temple and sacrificial offerings were made, only the high priest could enter into the Holy of Holies once a year. All activities and priestly functions concerning the temple worship process were all performed under strict observance to the law, Hebrews 9:7-10. The earthly temple was only a replica of the heavenly temple now in view by John, Exodus 25:8-9. Moses and John are the only two men who saw the heavenly tabernacle while still in their earthly bodies. The tabernacle has a special significance and where God dwelt among the children of Israel, Leviticus 26:11-13. 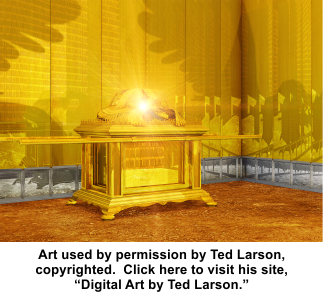 In Revelation 11:1-2, after measurements were taken but not recorded of the rebuilt earthly temple for the tribulation period, that God's temple was opened. It was then that John observed the ark of the covenant, Revelation 11:19. This was also the occasion when the ministry of the two witnesses to God's would be concluded. This was during the first half of the tribulation, at the time of the ascension to full satanic power by the Antichrist occurred at the mid-tribulation point. At this moment in John's vision of the heavenly tabernacle, it was not seen as a time for man to approach for forgiveness, grace and peace with God, Revelation 15:5. It is a time when judgment and great wrath originates in the heavenly temple and is poured out over the entire world, Revelation 15:8

In Revelation 15:6-7, out of the temple came seven angels. John saw the temple earlier in Revelation 11:19, after measurements of the rebuilt earthly temple for the tribulation period were taken. This was during the ministry of the two witnesses of God, and before the ascension to full satanic power by the Antichrist at the mid-tribulation point. 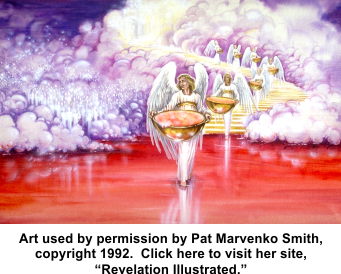 The angels carried the bowls of seven plagues, and were dressed in clean shining linen, Mark 9:2-4, and each wore golden sashes around their chests, Revelation 1:17. One of the four living creatures who John had seen earlier before the throne of God, Revelation 4:6-8, gave out a golden bowl to each angel. Each bowl was filled with the wrath of God, Jeremiah 25:15. It is interesting to see the meaning of the Greek word used for wrath, "thymos," which means passion, angry, heat, or anger forthwith boiling up and soon subsiding again. This can be found in the blueletterbible.org. Dictionary and Word Search for 'thymos (Strong's 2372)'. Blue Letter Bible. 1996-2002.

In Revelation 15:8, the temple was filled with smoke from the glory of the Lord and from His power. No one, not even the tribulation saints, could enter the temple until the seven plagues were completed, Psalms 79:6-13. No reason is given explicitly for why the Lord is unapproachable, but some reasons may be due to: