Revelation: Chapter 19 - The battle of Armageddon

The battle of Armageddon is detailed in many passages in scripture. The numbers of people involved directly in this battle are staggering to think of, with the 200,000,000 million army approaching Israel from the East. To meet and counter this mighty force, Satan, the Antichrist, and the false prophet will assemble their army from among all the nations they rule over to answer the threat. Though those numbers in the armies of Satan are not given, they would need to be at least in the same numbers, or greater than that of the invading forces. Conceivably, there could be nearly 1/2 billion people along the Armageddon battle front. It is interesting to see how the unholy trinity (Satan, Antichrist, and the false prophet) respond to the approaching army in Revelation 16:12-16, and then when Christ returns, the opposing forces suddenly coalesce into a united army against the Lord's return. This period in time is described in Psalms 2:1-12, where the rebellion in the form of the assembly of the nations against the Lord occurs, and God's response is to laugh at them. Not only will the Lord have the victory, He will establish His millennial reign at the conclusion of this battle. 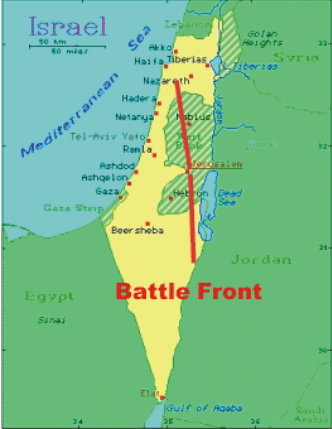 The most popular location that has worldwide recognition is the Armageddon, Revelation 16:16. However, the Lord also spoke through His prophets over two-and-a-half millennia ago concerning this period of time when He will judge the nations, such as the prophet Malachi in Malachi 4:1-5. Other passages in scripture show that about 1/2 billion people are lined up along a battle front that extends from the north to the south across much of Israel from Armageddon, through the valley of Jehoshaphat (same as the Kidron Valley on the east side of Jerusalem and west of the Mount of Olives) as seen in Joel 3:2 and Joel 3:12, as well as Zechariah 12:1-9, and Zechariah 14:1-15. The battle front then extends southward to an area south of the Dead Sea in Edom. Isaiah 34:1-15, and Isaiah 63:1-6.

Scripture not only provides the location and the identification of who will take part in this incredible battle, but it also provides the time of the battle, relative to the beginning of the seven years of tribulation. References to angels with sickles in Revelation 14:14-20, and later in Revelation 16:12-16 concerning the first six bowls of wrath, show that all of these events precede the battle of Armageddon. Actually, it would appear that the pouring out of the seventh bowl occurs immediately after the battle of Armageddon and the return of Christ and Revelation 19:19-21. The seventh bowl demonstrates the end of God's judgment and the end of the tribulation.

The end result is the enormous carnage as a result of man's decision to rebel against the Lord and follow Satan as their god. A chart that provides a concise view of all the activities during the tribulation will that result in a vastly reduced world population, can be found by following the following link, a compressed view of revelation. As the Lord said in Matthew 24:15-22, except those days were shortened, no flesh would survive.

The end of this time was also revealed to Daniel when he first told King Nebuchadnezzar what his dream was, and then gave him the interpretation as the Lord had shown Daniel, Daniel 2:42-45. The battle of Armageddon will be the complete destruction of the Gentile domination over world affairs and over Israel. The destruction will be so complete that there will be no remembrance of the Gentile rule.