The following series of timelines are intended to present a total view of all the prophesies has they have been revealed to Daniel up to Daniel 9:1-27. There were two primary reasons for Israel being taken captive and removed from the land promised to them by the Lord. First was for the sins of King Manasseh and for the innocent blood that was shed in Jerusalem, which the Lord would not pardon, 2Kings 24:1-4. Second, to fulfill the word of the Lord through Jeremiah the prophet, the duration of the of their absence would be for 70 years to let the land rest for the Sabbaths missed, 2Chronicles 36:20-21, Jeremiah 25:8-11. The Lord also said through Jeremiah that sending away the captives from Judah into Babylon was for their own good, Jeremiah 24:5-7. This first timeline is shown again to remind the reader of the first time King Nebuchadnezzar took some of the best talent from Judah, including Daniel, along with some of its riches back to Babylon. This date was 605 B.C..

This is defined as the beginning of the age of the Gentile era, where four major kingdoms who would rule and influence Israel and Jerusalem, according to the dream of King Nebuchadnezzar in Daniel 2:1-49. See the discussion on Daniel chapter 2 on this site for further information. Other relevant dates and time frames are also provided which were prophetic events revealed to Daniel in Daniel 9:1-27. The following chart builds upon the one above, and is a summary of the prophetic events for Daniel 7:1-28 and Daniel 8:1-27. This summation can also be read on this site within the pages on Daniel chapter 7 and Daniel chapter 8 respectively. In addition, the date for the final invasion and destruction of Jerusalem and the Temple is given in the timeline as 586 B.C.. 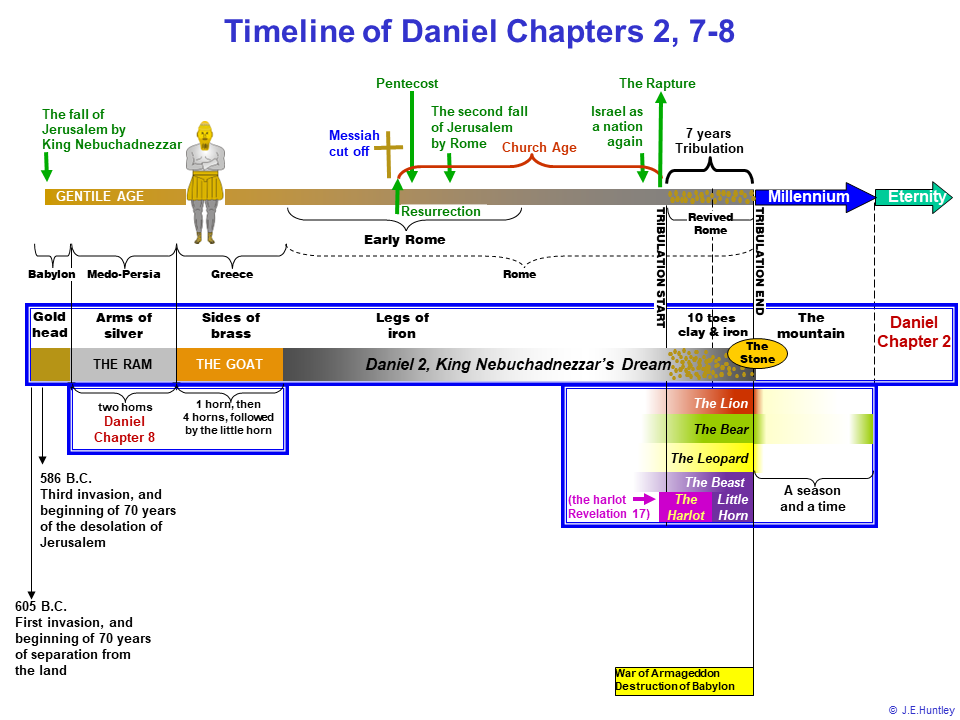 The next timeline presents the information for Daniel 9:1-27, which is built upon the previous timeline. There are additional dates shown in the following timeline, First in green below the box for Daniel 8:1-27, is a green star and the approximate date that the first wave of Jews returned into their land with Zerubbabel and Joshua. The approximate date of 536 is given, but it is 70 years from the date that some of Israel were first taken back to Babylon in captivity. There are other dates given in red text that relate specifically to the 70 weeks as revealed to Daniel. The first is 444 B.C., which is when the temple built under the governorship of Zerubbabel was completed. Those were troublous times for the Jews in rebuilding the temple. The second date of 33 A.D. is when, according to the 70 weeks that were revealed to Daniel, the Messiah would be cutoff, or be rejected by Israel and be killed. Soon afterward would the people of the prince to come (Antichrist), who would destroy the temple and Jerusalem. This would all be accomplished in the 69th week. This leaves the final week, which is the seven years of tribulation. At the beginning of the seven years, Israel will enter into a seven year covenant with the government that the Antichrist represents. However, in the midst of that period, or after 3 1/2 years, the Antichrist will break the covenant, seek to be worshiped as god, and try to destroy all who believe and call upon the name of the Lord. At this time these are the tribulation saints who maintain their testimony of the Lord Jesus Christ despite the horrific persecution. The three segments of the 70 weeks are shown in the yellow-filled box near the bottom of the timeline. There are also notes on the left side and bottom of the timeline, providing insight as to the content of all the declarations of the kings, and the final decree by Artaxerxus who was king over the Medes and Persians. 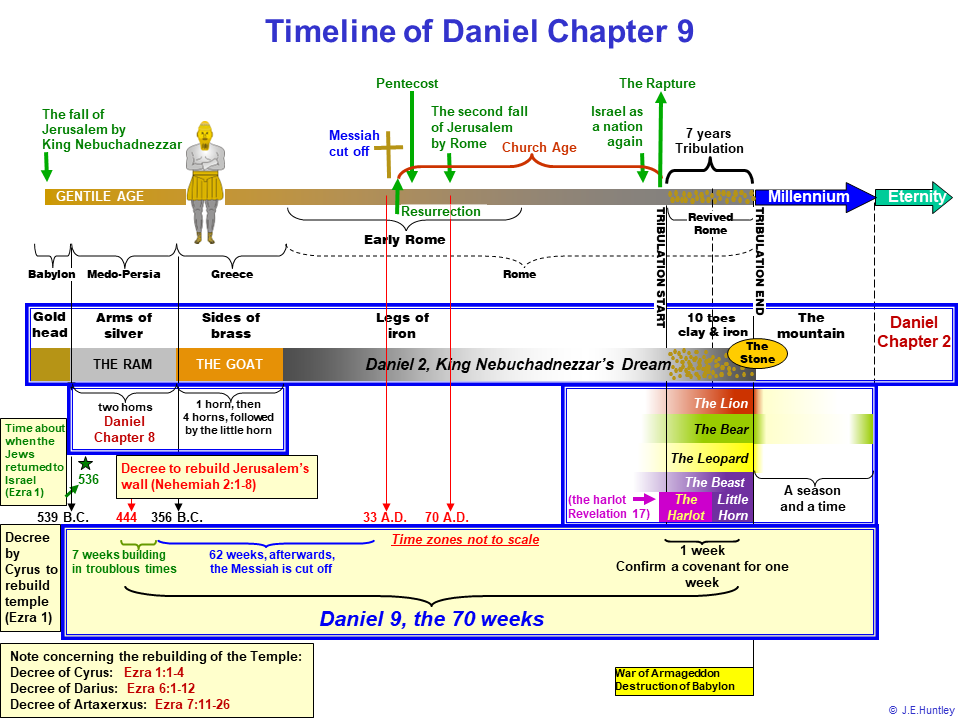 The next timeline again builds upon the previous timeline. This one illustrates the passage in Hosea concerning the future worldwide dispersion of the Jews, and the endless grace of the Lord to return His people to the land that He promised to Abraham. Then, during the millennial reign of Christ, the land and its people will be tremendously blessed. 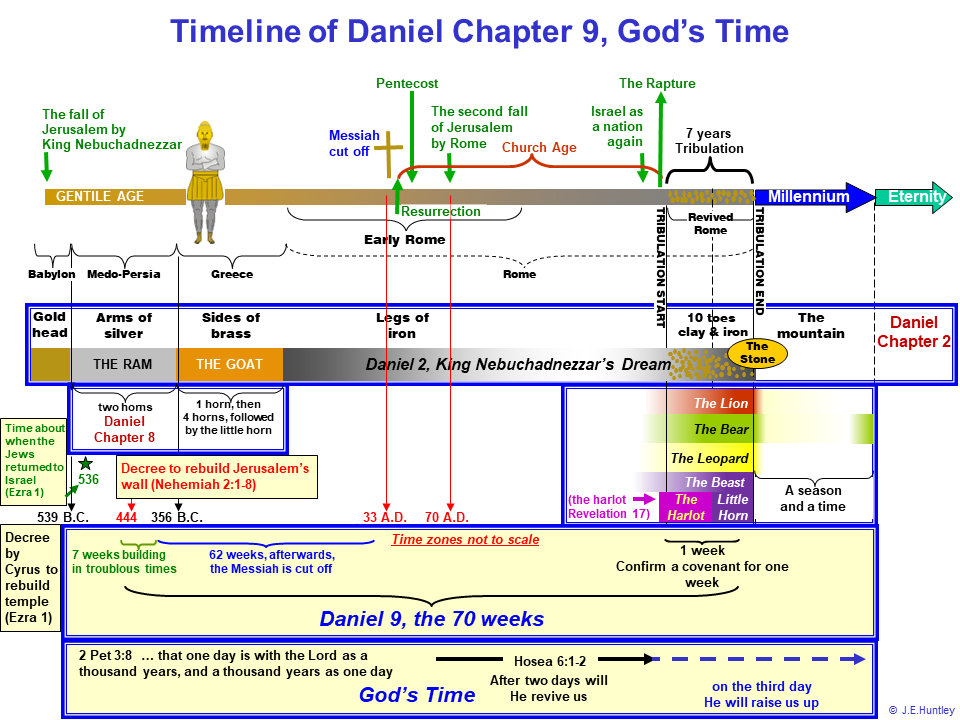 The final graphic below shows the church age, which was not revealed to the Old Testament saints. This is shown as that period of time that begins with Pentecost and ends with the rapture of the church. From the Old Testament point of view, the Jews are still looking for their Messiah, since they have not accepted the Lord Jesus Christ as their Messiah. Even to this day, many still reject Him as their fathers did in the first century. However, despite all this, the Lord is still faithful to His people and to His name. The Lord continues to gather all of the children of Israel from all the nations that they were dispersed to, into the land they were promised, in Israel. It is there that he will cleanse them from all their filthiness and from their idols, God's name will be glorified, and He will put a new spirit in them to keep and to follow His judgments, Ezekiel 36:16-28. 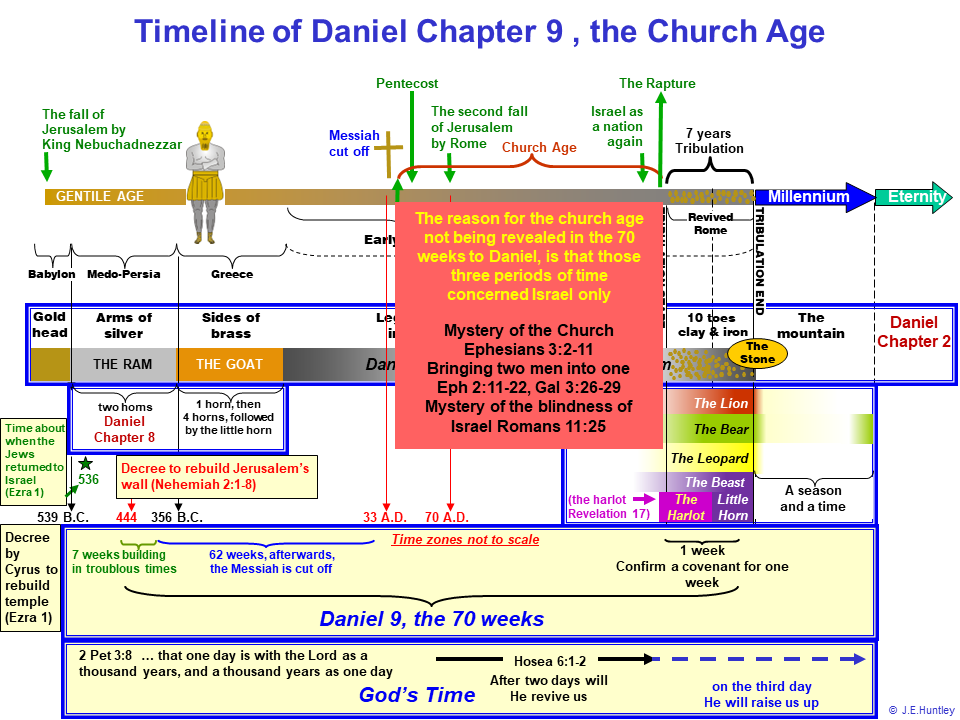