There are two timelines that are used to construct the following timeline for Daniel 2:1-49. The first is the base timeline for the book for Daniel that was written about in this site on Daniel 1. On that web page you will also find the discussion on what constitutes the age of the Gentiles. Second, is the base timeline with critical historical days that are shown in the interpretations section, under the timeline link. What is shown below is a combination of these two timelines, but varied by first, removing the critical dates and showing new ones that are relevant to the book of Daniel. The second timeline has been segmented based on the Gentile eras as revealed in Daniel 2:1-49. There are four discreet nations referred to in King Nebuchadnezzar's image, the fourth being divided into two parts that are divided by time. Though the names of the nations associated with each metal are not given in this chapter, except for the head of gold, they are identified later in this book. What is shown below are the four nations: the head of gold (Babylon), arms of silver (Medes and Persians), sides of brass (Greece), and the legs of iron, (Rome), followed by the ten toes that is shown as a mixture of iron and clay (the revived Roman empire which is a future event). Below the base timeline is a tan box boarded in blue. Inside of that box are these different parts of the Gentile era. The Roman era is shown as a dark gray rectangle, that fades into white, since the Roman empire was never defeated as the previous empires of Babylon, Persian, and Greece. The Roman empire is shown to become gray again, but with the nodules of brown to represent clay mixed with iron during the seven years of tribulation. As with the other empires there will be an abrupt end of the Roman empire and a complete end of Gentile rule or influence over Israel and its capitol Jerusalem. The Gentile rule will end with the return of the Lord Jesus Christ, which is represented by the stone made without hands. The stone strikes the ten toes of the image which represents the ten kings who will reign with the Antichrist during the last half of the tribulation as seen in the description of this site on Revelation 13:1-18, Revelation 17:1-18, Revelation 18:1-24, and Revelation 19:1-21. The event of the stone striking the ten toes is the battle of Armageddon. Thereafter is the establishment of the 1,000 year reign of the Lord Jesus Christ is represented by the mountain that forms from the stone. The dates at the bottom of the dateline in black represent the end of one empire and the beginning of another. The dates in the red font, are significant dates in reference to the order to rebuild the walls and streets of Jerusalem, in the death, burial, and resurrection of the Lord, and in the destruction of Jerusalem followed by the world-wide dispersion of the Jews. Also shown is the prophecy given by Jeremiah concerning the limited numbers of generations of King Nebuchadnezzar who would follow him before the fall of his kingdom. 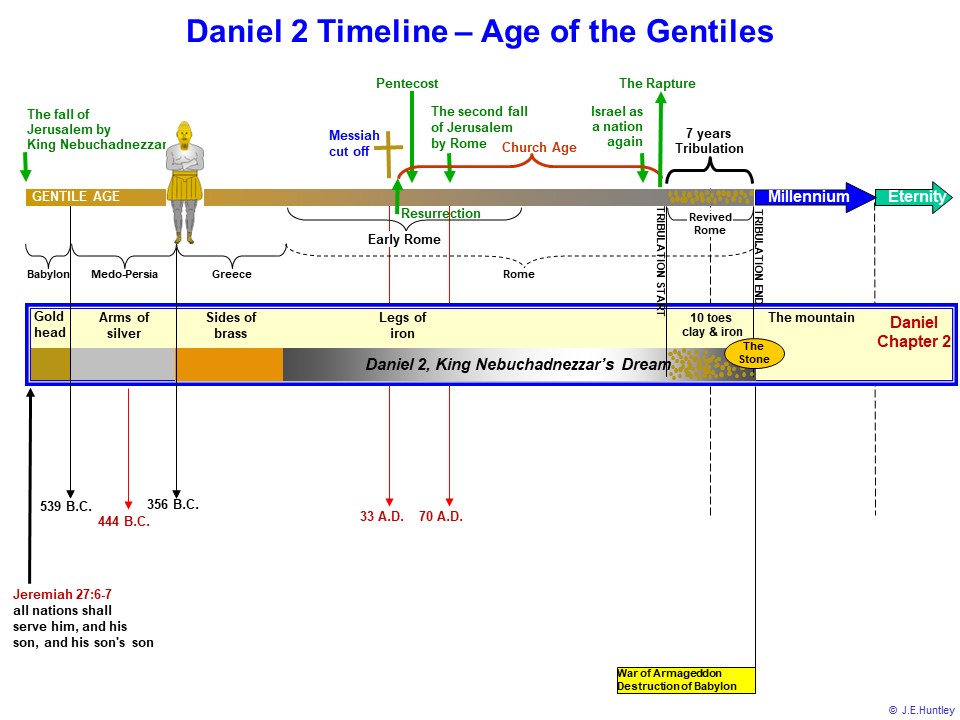 The following graphic has a simple overlay to aid in identifying key verses in Daniel 2 that relate to each of the segments that are shown for the timeline of this chapter. 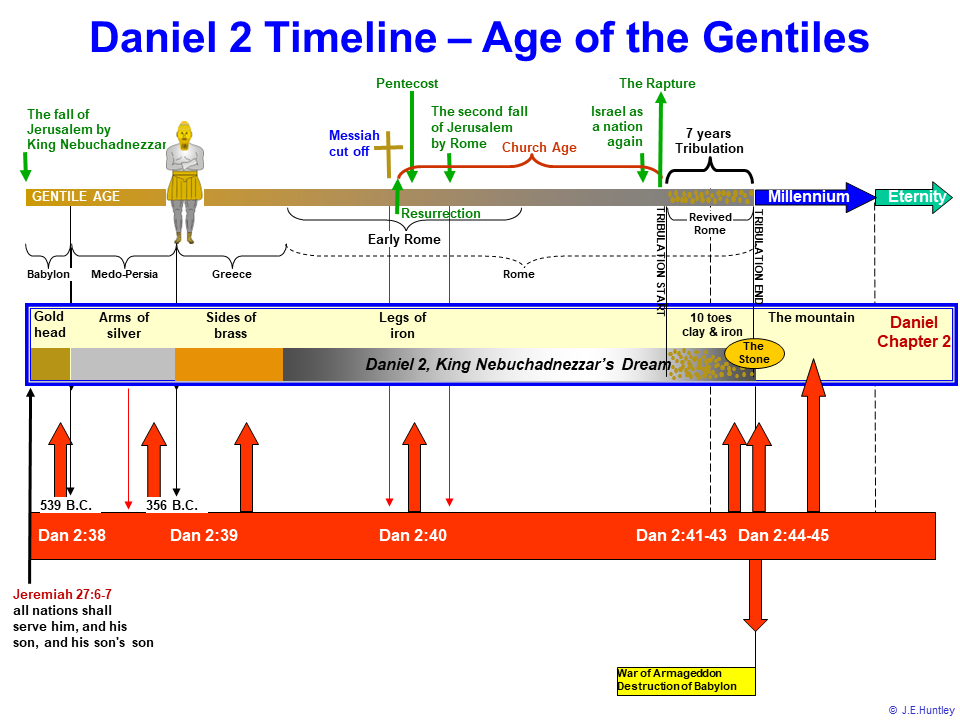