This chapter is the end of the visions of Daniel, but it actually carries through to the end of the book to Daniel 12:1-13. This chapter lays the foundation and provides the setting for the remaining chapters. It gives an overview of events revealed in previous chapters, yet provides more detail than the previous visions. It is curious that Daniel maintained his Babylonian name Belteshazzar while under the rule of the Medes and Persians. No where in Daniel 6:1-28 was he referred to by this name, yet it is repeated here, possibly in fondness to the king who had given him that name, and who had turned to believe in the Lord through the faithfulness of Daniel. It may be inferred that by this time Daniel was in a state of retirement based on the last verse of the first chapter in Daniel, Daniel 1:20-21.

In Daniel 10:1, Daniel begins this verse in the third person, as if he were sending an official document to others, and he uses his official Babylonian name. But he does establish the day of this revelation, during the reign of Cyrus, king of Persia. Similar to Daniel 2:1-49, where he emphasized the truth of what God had revealed to the king, and the interpretation through Daniel, so he again underscores the truth. The dream of King Nebuchadnezzar did not indicate that its fulfillment would occur over a prolonged period of time, but it is explicitly stated here. An important point to make is that Daniel 10:1-21 through Daniel 12:1-13 are actually all the same revelation. The chapter breaks were not part of the original text, but put in much later in time to enable people to better communicate the context of their discussion on scripture.

In Daniel 10:2-3, he describes how he was in mourning for three weeks. While in this state, he did not eat bread, meat, nor any wine. He did neither bathed himself. The mourning of Daniel took place in the 3rd year of Cyrus the king of Persia , which was after a “few” of the Jewish population in exile, returned to Jerusalem. It is also interesting to note that Daniel’s mourning extended through the entire Passover and Feast of Unleavened bread, the time of celebration and remembrance of Israel's exodus out of Egypt, Exodus 12:1-51. This was a perpetual event to be observed every year by Israel to instruct each new generation about the Lord's leading His people out of bondage into the land of promise.

There is a powerful comparison between these observances to what is prepared for Israel’s future. These celebrations remind the Jews of God’s great hand in redeeming His people, and drawing them out as a nation from the land of Egypt. Daniel's vision was one that covered both the near future of Israel (influenced by the little horn described in Daniel 8:1-27), and the far future (influenced by the little horn who is the Antichrist, described in Daniel 7:1-28). Similar to when Israel was delivered from Egypt, a great deliverance of Israel will occur again, but at that time it will be from all the nations of the world. This will occur with the return of the Lord Jesus Christ at the battle of Armageddon. It is then that He will establish His worldwide rule, and be seated on the throne of David. 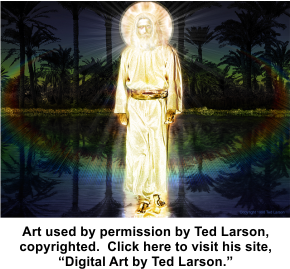 In Daniel 10:4-9, Daniel reports that he was on the banks of the Tigris River on the 24th of that month. There, Daniel observes a phenomenal sight, a vision of a man greatly dressed. Centuries later, soon after the death, burial, and resurrection of the Lord Jesus Christ, the Apostle Paul only saw a bright light while on the Damascus road. He knew immediately that it was the risen Lord, as recorded by Luke, and later in his epistles, Acts 9:3-9, Galatians 1:11-23, In both instances of Daniel and Paul, not only was the experience unexpected, but none of those traveling with them could grasp the full nature of what was happening. They only knew that something quite powerful had happened.

Daniel saw in his vision a man brilliantly clothed, which is similar to what the Apostle John while on the Isle of Patmos described in Revelation 1:1-20, when he looked upon the glorified Christ. What Daniel saw was the pre-incarnate Christ, since his vision occurred before the first advent of the Lord Jesus Christ. Not only are physical descriptions of Christ strikingly similar, but so are the men's reaction to this sight. Both Daniel and John fall prostrate at the presence of the glorified Christ. Also, both were alone when their vision occurred. In the case of Daniel, though he had companions with him, they did not see the vision, but sensed something that caused them great fear and they fled, similar to what is written by John, Revelation 6:15-16.

In Daniel 10:10, there appears to be an angel who touches Daniel and helped to set him up on his knees and hands. This angel is not named, so he may or may not be Gabriel. To keep from distracting from his message, the name of this angel is of no consequence. The main issue is what the angel reveals to Daniel.

In Daniel 10:11, the angel tells Daniel of the favored relationship that he has with the Lord, and then encouraged Daniel to stand up. Though Daniel heard and did as he was told, he was physically still shaken at the awesome sight that was developing before him..

This is one of the few times that the curtain on heavenly activities is lifted for us to glimpse upon the role and influence of the spiritual domain upon our physical world. After providing comfort to Daniel more than once, this angel reveals some startling facts. First, in Daniel 10:12 the angel indicates that from the first day when Daniel began praying and fasting concerning the vision and understanding he was given, that the angel was tasked to meet with him. The interesting fact is that the angel was delayed in his task and could not immediately complete his mission.

In Daniel 10:13-14, the second fact is that the angel was held up for three weeks by the prince of Persia. This is obviously a fallen angel who was captured by Satan's subtle lies, and removed from the Lord's heavenly presence, Isaiah 14:12-17, Ezekiel 28:11-19, Revelation 12:2-3. Michael, who is called one of the chief princes of Israel, Daniel 12:1, was called to help this angel complete his mission to advise Daniel and to make him understand what would befall his people (Israel), in the latter days. Notice that the angel said that the fulfillment of this vision would not occur for many days, implying that Daniel would not see these events.

In Daniel 10:15-19, Daniel responded again by setting his face to the ground. So the angel approached him, and touched his lips to open them. After that, Daniel began to speak many things, expressing his physical reaction to the visions that he had seen. He became terribly weak, and little breath was left in him. So once again the angel touched Daniel to strengthen him. The angel repeats that Daniel is greatly beloved, and encourages him to be strong and not fearful. At this word, Daniel finally strengthened himself, and asked the angel to continue to speak.

In Daniel 10:20-21, the angel asks rhetorically, if Daniel now understands why he was sent to him. He continued by saying that afterwards he would to return to fight against the prince of Persia, so that the prince of Greece would come. Again, this is just a slight view of the spiritual realm where events precede those in the physical realm. This is only the 3rd year of Cyrus when this vision occurs, about 556 B.C. Centuries later, Alexander the Greek will fight against and destroy the Persian empire in about 356 B.C. As evidenced in these passages, there is an implied difference in time and space in the spiritual realm versus our physical world, which is not fully revealed. The angel also stated that the Archangel Michael was supporting him, so that he could continue to provide this revelation to Daniel.

It is vital for the Christian today to understand that the prayers of the righteous are effectual, James 5:16. For through prayer and fasting some spirits can be expelled, Mark 9:25-29. The following list provides further reasons and outcomes from prayer as evidenced in scripture.