Daniel: Introduction to the base Daniel Timeline

There is much to write concerning the book of Daniel, but this site will only devote a high level review of this book. Daniel is an important key in understanding the prophetic passages in scriptures, and the book of Revelation. The books of Daniel and Revelation are intertwined completely. However, more was revealed to Daniel than what he was able to understand and what he recorded, as shown in Daniel 12:8-9. Conversely, the Apostle John, who wrote Revelation, he was told to record everything he observed and was told. With respect to Daniel, the Lord may have wanted His people to look forward to the first coming of Jesus, and so the words of Daniel concerning the last days were to be sealed for a later generation. It is probably no coincidence that the beginning of these prophesies through Daniel occurred at the beginning of the days of the Gentiles. This is the period wherein the Gentiles would rule or have significant influence over the affairs of Israel, and specifically Jerusalem. The book of Daniel outlines the principal players that will appear during the tribulation period, the length of days, and identifies many issues of importance to Israel pointing ahead to a time that they will finally recognize their Messiah, as Jesus, who first visited them in humbleness.

To facilitate the unfolding of prophecies in this book and how they relate to other passages in the Bible, a basic timeline shown below will be built upon to gradually introduce the complexity of what is presented in the book of Daniel. The timeline begins when King Nebuchadnezzar began his conquest of Israel, and his eventual destruction of Jerusalem. This is the beginning of the of the Gentile rule and significant influence over the country of Israel and the city of Jerusalem. Several of the chapters in Daniel have prophetic passages that will be illustrated on this basic timeline. As each section is examined, appropriate information will be added to the timeline. By the end of Daniel 12 the timeline will have been filled in to present a comprehensive view of what has been presented in this book. The timelines used on this site are intended to aid the reader in understanding the order, extent, and concurrent events that are presented in the many prophetic passages in the Bible. They are general in nature and every effort has been made to assure their accurate depiction of the prophetic passages. However, there are instances where attempting to be precise is unattainable with the tools available and due to the rise of clutter to the charts rather than clarity with to much detail. These limitations are noted as they occur within this site. Since these are generalized timelines, in many cases, intervals of time along the horizontal do not portray equal intervals of time, only the relative occurrence of one event with another. In all cases, it is incumbent upon the reader to search the scriptures out for himself or herself, and evaluate the content of this site or any other source against what the Word of God says. More information on the timelines developed for this site can be found on the interpretations section, under the timeline link.

As with all timelines, the one used on this site begins with a very simple horizontal bar, as seen in the following graphic. The book of Daniel helps in understanding prophecy in the Bible for many reasons. The first reason is that the Lord reveals to Daniel, King Nebuchadnezzar, and to all peoples, His plan for the ages. Beginning with Daniel 1:1-21, Daniel as a young man is carried away with other well-learned and skilled men and women away from Jerusalem to Babylon. After some years of training, the young man Daniel and his fellow Jews, and friends, completed their training and were matriculated within the Babylonian system of advisors to the king. Daniel 2:1-49 provides tremendous revelations concerning four major kingdoms, that began with King Nebuchadnezzar's kingdom which was only in its third year of existence at the time of the prophesy revealed to Daniel by the Lord, , Daniel 1:5, Daniel 2:1, and the three kingdoms that would follow.

The times of the Gentiles

What are the time boundaries for the Gentile age and why are only four kingdoms identified in this prophesy? There were many other great kingdoms in the history of mankind that rivaled Babylon; China, Mayan, India, etc.. These and other empires in world history are not considered in Biblical prophecy, or as the start of the Gentile era, since they neither trampled underfoot, nor either controlled or significantly influenced the affairs in Jerusalem. The Gentile era does not even begin at the time when the Northern Tribes of Israel were taken into captivity by the Assyrians, 2Kings 17:20-24. What defines the Gentile era is their rule over the people of Israel AND Jerusalem. Jerusalem as a key in understanding prophecy is brought out in the prophetic timeline revealed to Daniel by the angel Gabriel, Daniel 9:21-25, in which the 70 prophetic weeks (490 years, see this discussion in this site on Daniel 9) begins with the order to restore and build Jerusalem, not just the temple. As shown in Daniel 2:36-38, the era of the Gentiles began with the three military campaigns of King Nebuchadnezzar against Jerusalem, and will not end until the return of Jesus Christ to establish His millennial kingdom, as shown in Revelation 19:11-21 with the Lord's return and in Revelation 20, which is the Lord's reign on earth. This was substantiated when the Lord provided the dream of the Gentile era to both King Nebuchadnezzar and Daniel. Therefore, the Gentile rule began when the people of Israel in the Southern Tribes were first displaced from the land the Lord had given them, and Gentiles began their rule or have influence over Jerusalem, starting with King Nebuchadnezzar (the dream came immediately after the first conquest against Jerusalem). The Gentile rule will not end until the return of the Lord with His saints at the battle of Armageddon to establish the first 1,000 year of His eternal reign over this world.

The following graphic builds upon the basic timeline above, and illustrates the critical historical events and prophetic events yet to occur relative to the church age. The date of this writing is still the church age, and serves as a reference point to much of what is written in this web site. 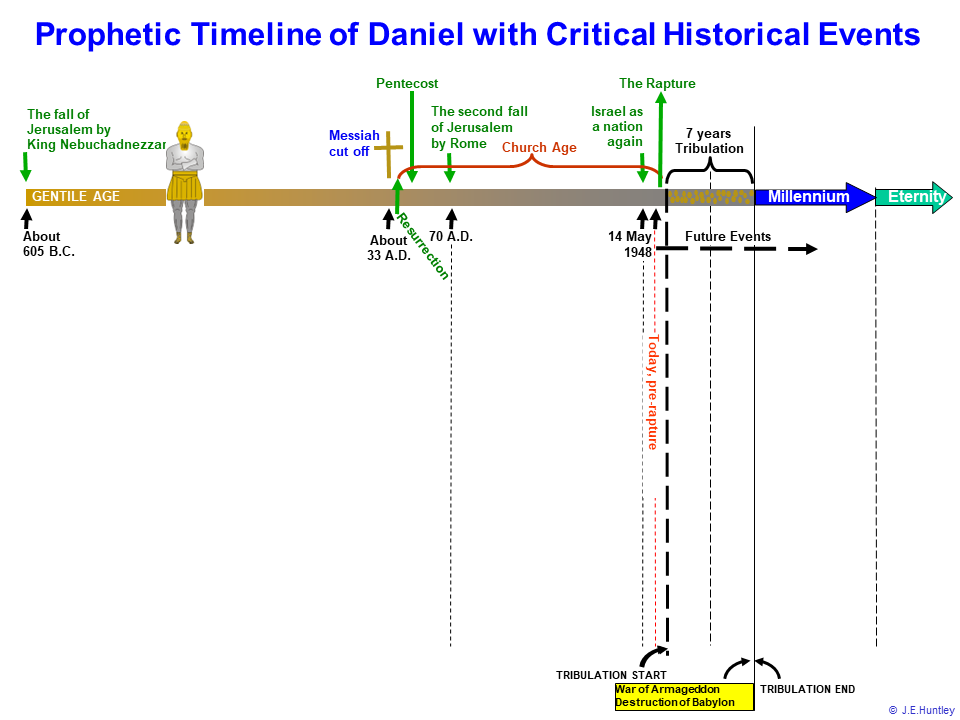 During the Lord's first earthly ministry, He had said that Jerusalem would continue to be trodden down by the Gentile until their time was fulfilled, which again is the end of the seven years of tribulation, the battle known as Armageddon. This is the time of the Lord's return for His second advent, but at that time it will not be as a humble servant as the first time, but as King of kings and Lord of lords. Time time of the Gentiles is shown by the solid red arrow from left to right between the yellow oval with the scriptural reference to Luke 21:20-23, and the quotation of the scripture that appears in the yellow box. The left arrow head shows the beginning of the times of the Gentiles, ending with the right arrow head that indicates the fulfillment of the Gentile age. 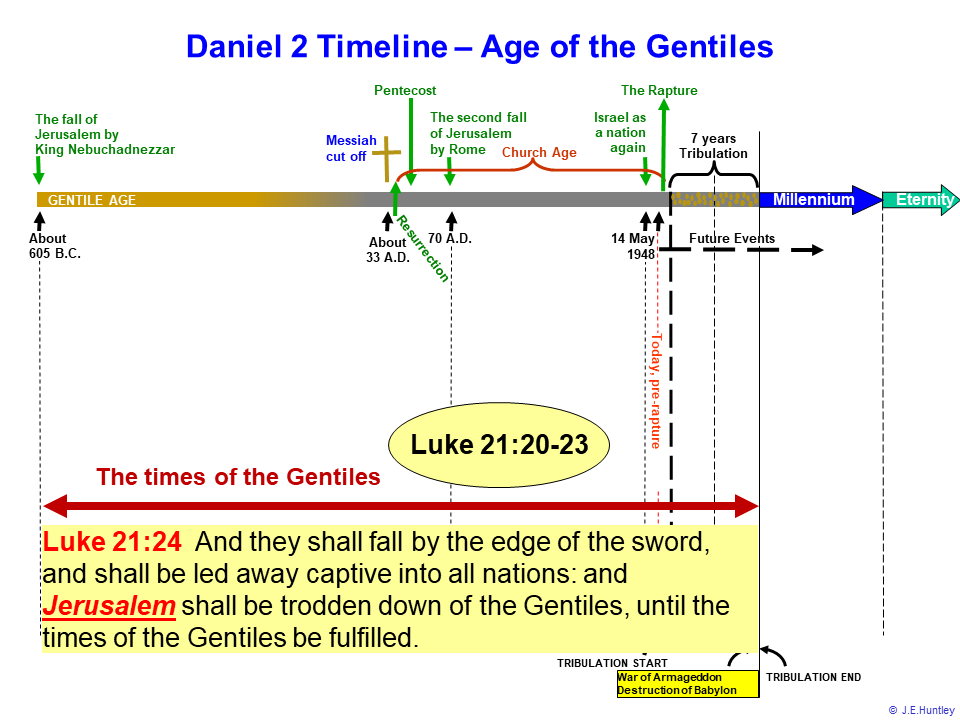