Interpretations: The Mystery Program - The mystery of Christ

Paul wrote to the Ephesians his desire that they and we would understand his knowledge in the mystery of Christ, Ephesian 3:3-4. He also asked the believers in Colossae to pray that God would open doors so that he and those with him could speak the mystery of Christ clearly for others to understand and believe, Colossians 4:2-4.

To understand the mystery of Christ, it is important to remember that God set aside the prophetic plan of Israel, temporarily until the snatching up of the church. Then, because of Israel’s fall, salvation had come to the Gentiles in order to provoke Israel to jealousy and return to their rightful place with Christ in the kingdom age, Romans 11:11.

Second, as Jesus journeyed to Jerusalem for the final time for his crucifixion, he provided His apostles with details that were prophesied by the prophets, including His resurrection, but the understanding of these prophecies was hidden from the apostles, Luke 18:31-34.

But after the ascension of the Lord, the Holy Spirit revealed to the Apostles all Christ said and taught them, to allow believers to know Christ and follow Him, John 14:26. Peter wrote that this awesome display of God’s grace after the death, burial and resurrection of Jesus Christ, 1Cortinthians 15:1-4, was something the prophets inquired and searched diligently about the grace to come. They wanted to understand how and when it would happen, 1Peter 1:11-12, 5:10. Again, why did God allow the temporary fall of Israel? This was to bring salvation to the Gentiles, and lead Israel back to belief in the Lord through jealously, Romans 11:11.

At the martyrdom of Stephen, scripture introduced for the first time, Saul, later Paul, Acts 7:55-60. It was at that moment, Israel fell and the church in Jerusalem began to diminish, Romans 11:11-12 (KJV). Later, the Lord met with Paul to reveal and teach him the mysteries that had been kept secret before the world began, Galatians 1:11-20, Romans 16:25-26. They were not revealed to the 12 apostles, but Paul shared with them what God was doing among the Gentiles, Acts 15:12. Not only did Peter affirm God’s grace upon the Gentiles at the council in Jerusalem, Acts 15:7-11, but Peter later wrote that Paul’s wisdom was given by the Lord for salvation, though some things were hard to understand, 2Peter 3:14-16.

The following graphic illustrates the formation of the little flock during the Lord’s first advent, which carried through until the martyrdom of Stephen, Matthew 3 through Acts 7:60. The tan area represents the Old Testament time and the green area represents the New Testament times. After the ascension of Christ Jesus, Acts 1:9-12 and power of the Holy Spirit coming upon the 120 people an upper room, Acts 1:15, with the Apostles on Pentecost, Acts 2:1-4, the Jerusalem church began under the authority of the little flock. However, it diminished because of the fall of Israel and as Paul’s ministry to the Gentiles was forming the Body-of-Christ. The graphic also highlights the time when Israel stumbled, Romans 11:11, when they delivered Jesus to be crucified, John 19:11, they fell after blaspheming the Holy Spirit the third time, Romans 11:11, and the fledging church in Jerusalem diminished because the prophetic plan of Israel was set aside, Romans 11:12 KJV. The Church is also shown to be snatched up to the presence of the Lord, 1Corinthians 15:51-58, 1Thessalonians 4:13-18, before the beginning of the seven years of tribulation, 1Thessalonians 1:10, 2Thessalonians 2:3-6, that the nation of Israel will go through. This is followed by the return of the Lord with all His saints, Revelation 19:11-14, as He sits on the throne of David beginning the first 1,000 years of His eternal reign, 1Chronicles 17:11-14, Revelation 20:4-5. From the time the Lord begins His earthly ministry until the final rebellion of Satan, Revelation 20:7-10, after the first millennium after the seven years of tribulation, that entire time is what the prophets called among other terms, the last days, Isaiah 2:2, Micah 4:1, 2Peter 3:3. 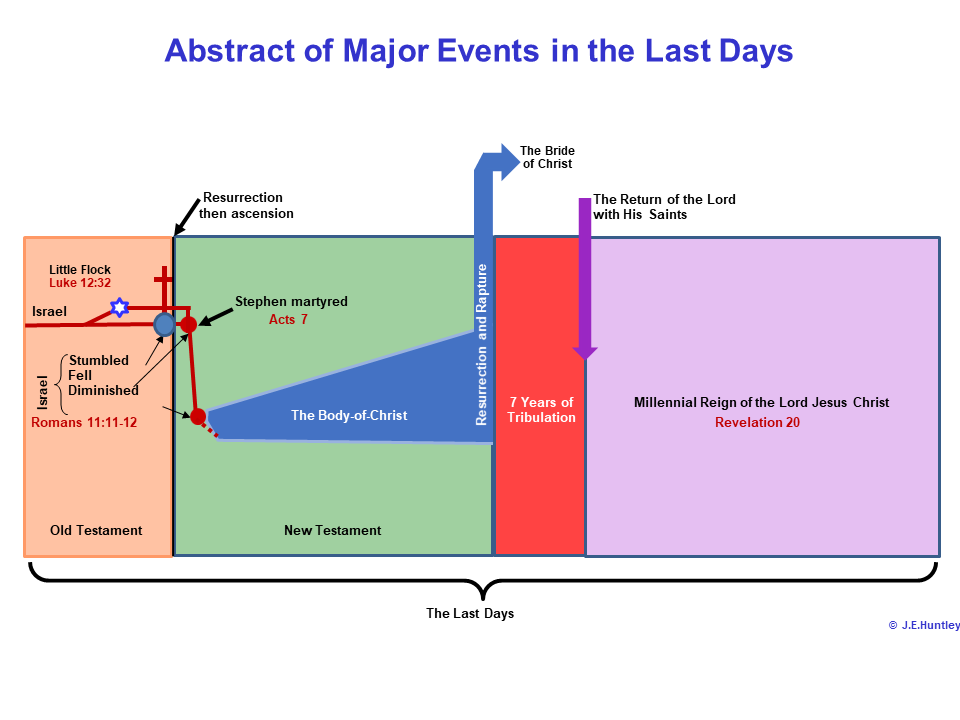 In his epistles, Paul wrote about Jesus Christ and all the mysteries that were revealed to him. As the Body-of-Christ, we have the responsibility to read Paul’s epistles and understand his knowledge in the mystery of Christ, Ephesians 3:3-7, which is now revealed to us by the Holy Spirit.

What the mystery of Christ means to us now, is that because of the work of the Lord on the cross by the shedding of His blood, we are fellow heirs as the Body-of-Christ, Jew and Gentile, and in the ever-increasing numbers since the Lord’s resurrection, we enjoy the promises of Christ Jesus.

Paul wrote more on this to the believers in Colossae, Colossians 1:13-20, where:

With the knowledge of all this, we are to continue in prayer and watch with thanksgiving. We are to pray for others and ask that God would open to all in the Body-of-Christ, an opportunity to speak the mystery of Christ to others, as an encouragement to believers and salvation to those who have not yet believed in the Lord Jesus Christ, Colossians 4:2-6.