for the
Olivet Discourse

The following series of graphical timelines are intended to present the prophesies contained in the Gospel according to Mark, specifically on Mark 13 which is the Olivet Discourse of the Lord Jesus Christ. Several parts of other timelines in this web site are being repeated here to provide the full context of these passages, and to demonstrate the complete, harmonized scripture. The following is a section in the web page in this site titled the survey of timelines for the church and Revelation. This will introduce the timeline that was constructed to illustrate all of the prophetic events revealed in the book of Revelation.

The baseline for the church age and Revelation timeline

First is the main horizontal bar that changes color from gold to an iron color, which are similar colors as revealed to Daniel by God, in Daniel 2:1-49. The colors on the bar, starting with gold and transitioning to iron, is only used to draw that distinction to the reader. However, a precise rendering would show an iron color during the age of the cross, fade to clear with the passing of the Roman empire, than become an iron color spotted with earth tones to represent the reformed Roman empire during the tribulation period and slightly before. The first three colors of gold, representing King Nebuchadnezzar's era, and silver, representing the time of the Medes and Persians, and the brass, representing the era of Greece's rule, have already passed. Based on Daniel, this horizontal bar represents the age of the Gentiles, which will last until the Lord returns, Revelation 19:1-21. At that time He will establish His kingdom on earth, to rule with an iron scepter, and to reign for a 1,000 years, or a millennium, which is represented by the blue arrow. Thereafter, will be the beginning of future eternity, when those who were justified by their faith in Jesus Christ, will be with Him and in the presence of the Father and Holy Spirit for eternity. The unjust, who rejected the revelation of Jesus Christ by the Father, are forever cast in the lake of fire. This event is shown with a green arrow.

Second, are the segments of time that divide the Gentile age. From left to right, there is the identification of the church age shown in a red horizontal bar, and some scriptural references. The church age ends with the rapture of the church, which is indicated by the vertical red arrow. A span of time is shown following the rapture of the church to the next vertical line, which indicates the beginning of the tribulation. The tribulation does not begin with the rapture of the church, rather with the signing of the seven year covenant between Israel and the government whom the Antichrist represents, Daniel 9:27. That event will occur simultaneously with the event in heaven with the Lord, represented as the slain lamb, opens the first seal of seven, to reveal the man with a crown on a white horse, Revelation 6:1-2. This event is further highlighted with the yellow box at the top of the graph, with some scriptural references. The seven years of tribulation follows, which is also broken into two 3½ year periods. The event that dramatically separates the two periods of time is the indwelling of Satan in the Antichrist, Revelation 13:1-18. There is a sudden and catastrophic end to the tribulation period which is Armageddon.

Third, the catastrophic change on earth is shown in the horizontal bar with the abrupt change to a blue arrow labeled Millennium. The event separating the Gentile age with the millennium is vertical line labeled tribulation end, with a yellow box at the bottom of the graphic labeled Armageddon, with some scriptural references. It is at the time of the battle of Armageddon when the Lord will return to this earth with all of His saints to conquer His enemies and establish His kingdom, Revelation 19:1-21.

Fourth, there is a season of time when Satan is allowed to roam the earth again following the millennial reign of Christ. During this time, he will seduce an innumerable multitude to rebel against Christ. At that time, God will end all rebellion, cast Satan into the lake of fire and setup His great white thrown judgment, Revelation 20:1-15. This event will separate the just from the unjust for eternity, Revelation 21:1-27 and Revelation 22:1-21. Thereafter, eternity future is shown in the horizontal blue-green arrow. 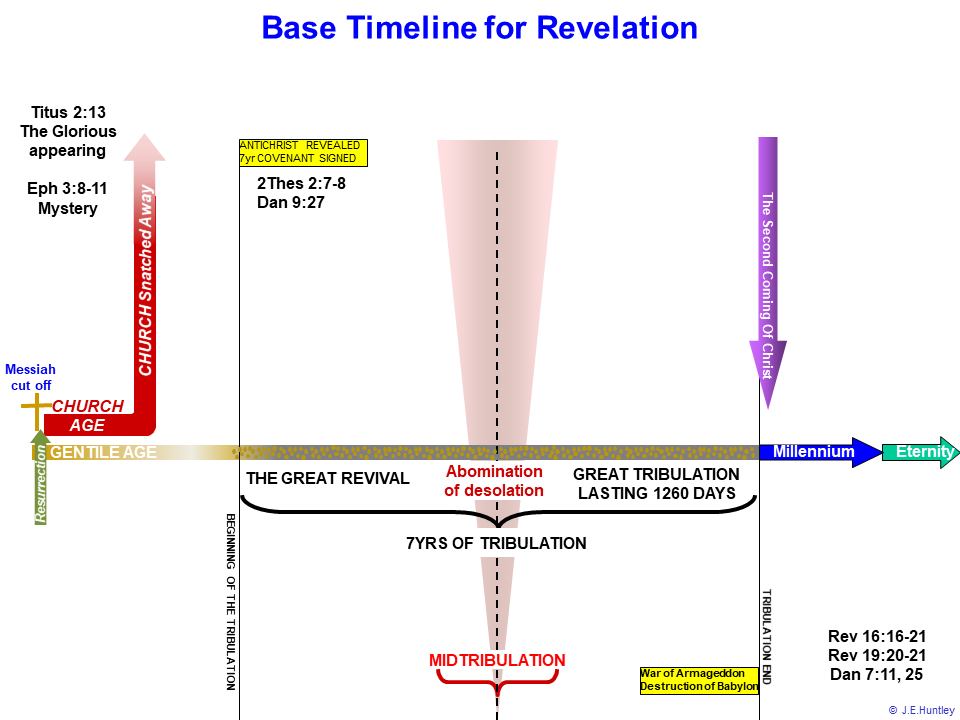 The baseline for the escalation of wars, famines, and other natural phenomena timeline

The following timeline builds upon the base timeline for Revelation. Though just a simple representation, the sideways triangle is representing the increase in the frequency of occurrence, intensity, and geographic impact of all the elements that the Lord identified in Mark 13:7-8. Implied in this graphic is that this is just the buildup of events that will proceed the seven years of tribulation. 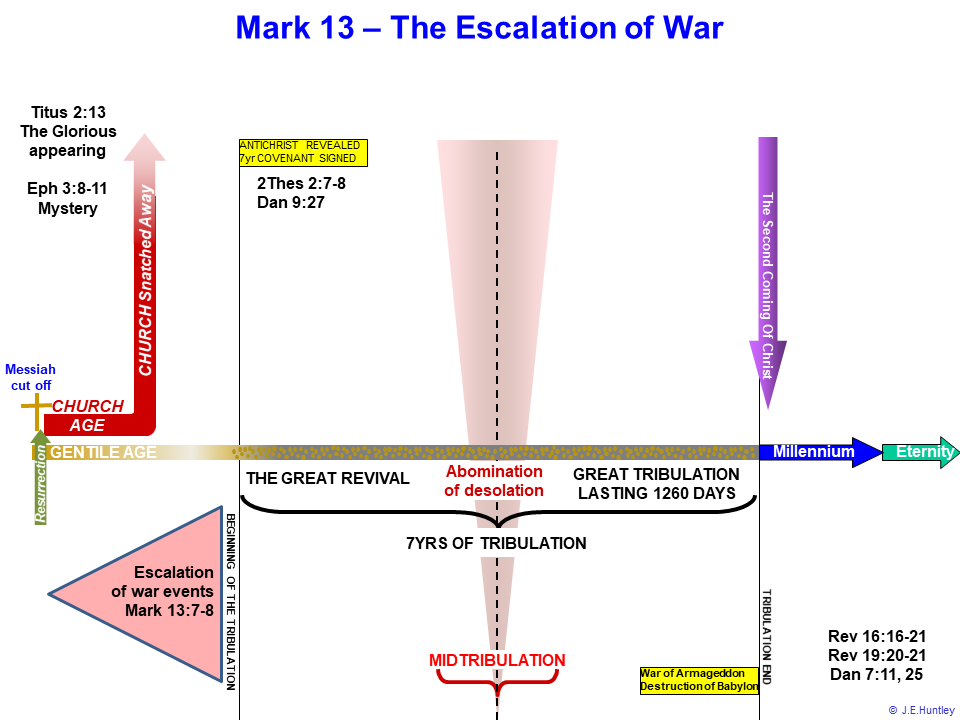 From the midtribulation to the end of the tribulation, and the glory of the Lord

The following timeline was developed in the timelines for Daniel 12:1-13. They are germane here as they illustrate the numbers of days for three events, which relate to the words of the Lord during the Olivet Discourse that Mark penned in this gospel. Proceeding the image being set in the temple area, the Antichrist and his forces will occupy Israel, and the Antichrist will setup his headquarters in Jerusalem that will persist for the last half of the tribulation. More information available in the web page on this site on Daniel chapter 11. There is more information on this web site in the section detailing Revelation chapter 11, and a discussion on this same topic on Daniel's two time periods. The graphic from that discussion is repeated below, showing the temporal extent of the Antichrist's occupation in Jerusalem, which covers all of the second half of the tribulation period. 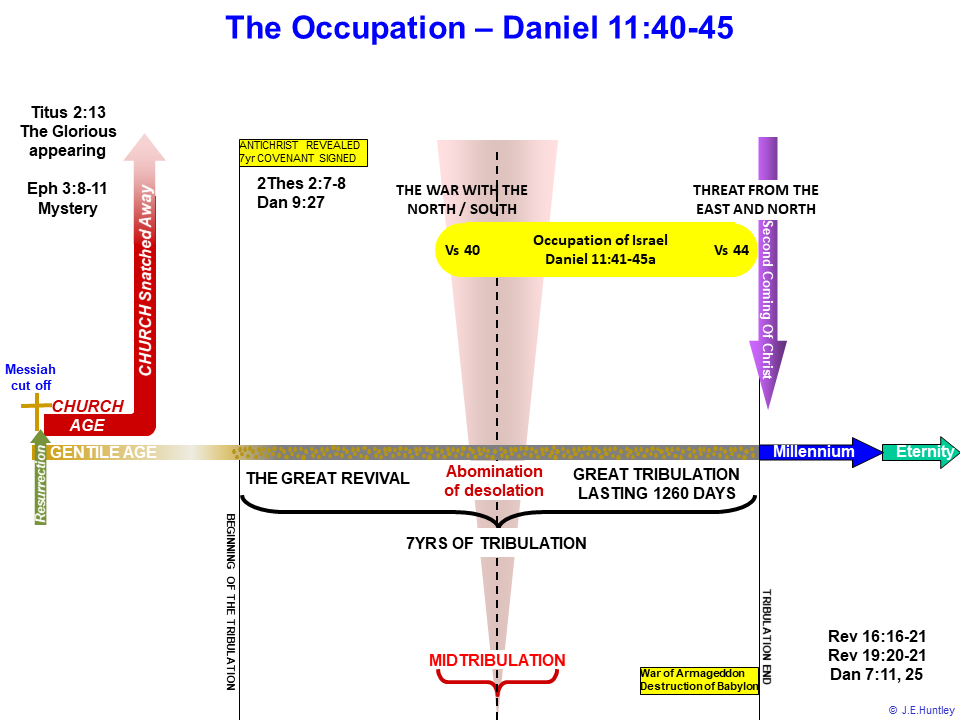 In Daniel 12:7 is the reference to "time, times, and half a time", or 3½ years. This is referencing the latter half of the seven years of tribulation, which is described at some length on this site in the page on Daniel chapter 12. This is also the time referred to in Daniel 9:27, when at the midpoint of the seven year covenant between that Antichrist and Israel, that the covenant will be broken by the Antichrist. He will cause an end to the sacrifice and offerings, and in a wing in the temple, there will be erected an image of him. This is what the Lord was referring to in Mark 13:14. The following timeline gives an illustration of the temporal extent of this period of time, which is the red horizontal line within the light yellow box circumscribed with a blue border. 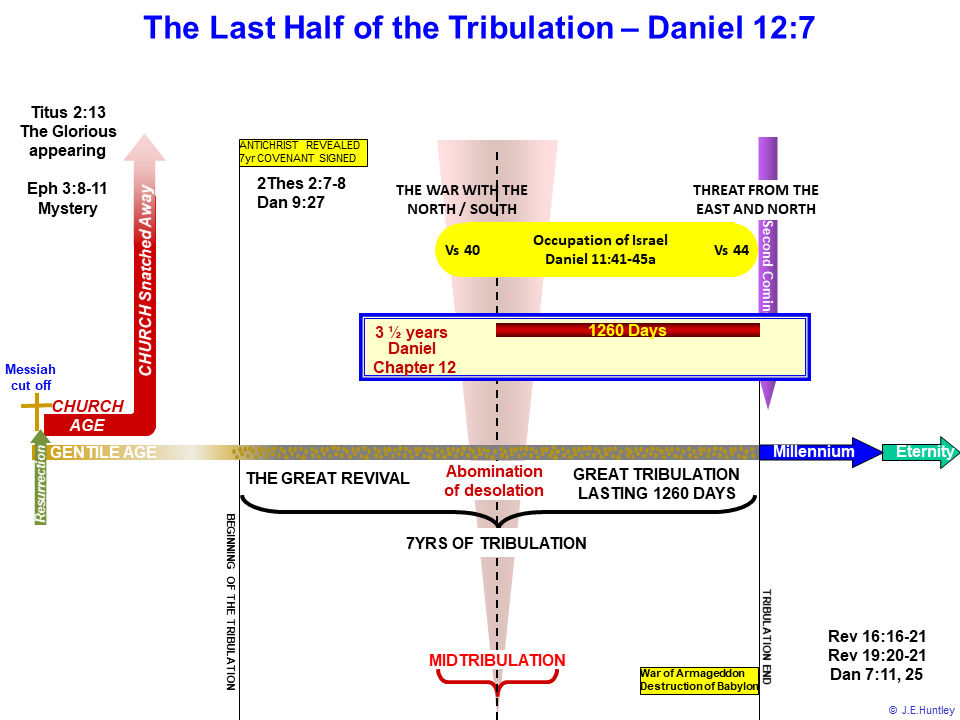 The next timeline illustrates the additional days that were told to Daniel, which he wrote down in Daniel 12:11-12. Further discussion on this topic is found on this site in the page on Daniel chapter 12. There is no consensus on how to interpret these last verses in Daniel, so it is with reservation that this opinion and scenario are provided. Within the same light yellow box is the second timeline, which originates just a few days before the point of origin on the red horizontal bar above it, which represents the last 3½ years of the seven years of tribulation. The lower red horizontal bar extends to the left of the bar above it, to represent the 30 days prior to the midtribulation point, and is the time when the sacrificing to the Lord in the tribulation temple is forced to stop. However, as noted in the graphic below, both time periods end at the same time, at the battle of Armageddon. This is also the timeframe that the Lord spoke of in Mark 13:14-18. 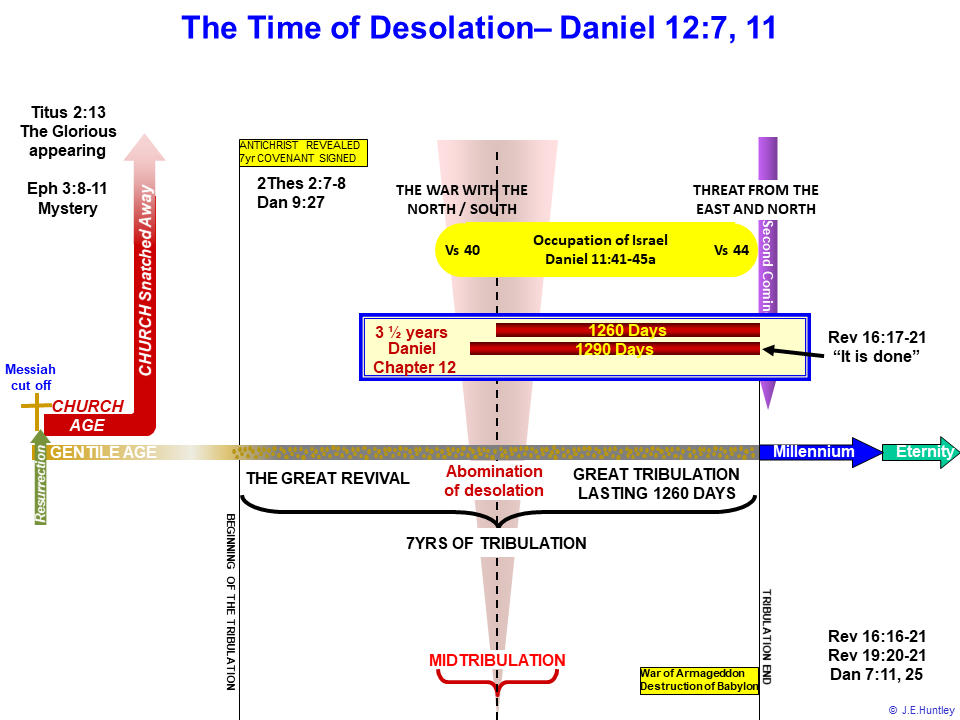 This next timeline is based on Daniel 12:12, which introduces a third time period. Further discussion on this topic is also found on this site in the page on Daniel 12. Again, there is no consensus on how to interpret these last verses in Daniel, so it is with reservation that this opinion and scenario are provided. Within the same light yellow box in the above timeline, the bottom two horizontal red bars originate with the cessation of the tribulation temple worship to the Lord. However, this last time period extends beyond the time period represented by the middle red bar below by 45 days. The reason for this extended period beyond the battle of Armageddon, is that the survivors of the tribulation are looking forward to the glory of the Lord arriving in His holy temple in the city that will be named, THE LORD IS THERE, or formally as Jerusalem, Ezekiel 48:35. This is that time that the Lord spoke of in Mark 13:26-27. In a miraculous way, the world will witness the return of the Lord Jesus Christ in the clouds back to this earth to rule for 1,000 years, Revelation 20:1-15, and to gather His own from across the entire globe and in heaven. This is a unique time in human history where there will be a mingling of those in their physical bodies with those in their eternal resurrected bodies. It will be a phenomenal time to witness. 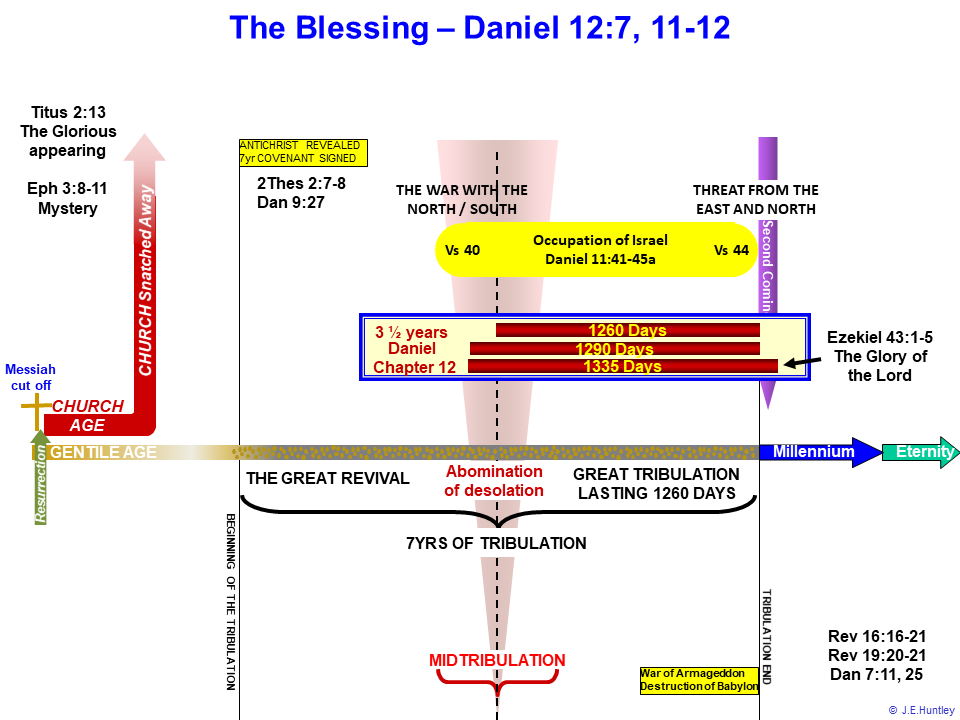 Times of the Gentiles and the Parable of the Fig Tree

The following timeline illustrates the temporal extent of the age of the Gentiles, which began in the days when King Nebuchadnezzar attacked Jerusalem three times. The third time he destroyed Jerusalem and the temple. The age of the Gentiles begins with King Nebuchadnezzar's dream, Daniel 2:1-49, which describes the future Gentile kingdoms, including his, which would rule over Israel and Jerusalem. The king had the dream, but it was Daniel who received the dream with the interpretation from the Lord. In that chapter, the king was identified as the head, and that all succeeding kingdoms would be inferior to his. More is written about this in this site in Daniel chapter 2, and the Daniel chapter 2 timeline. It also highlights the parable concerning the new fig leaves. The association of the new fig leaves is the rebirth of Israel as a nation. The late figs falling is a picture of the end of the tribulation period. 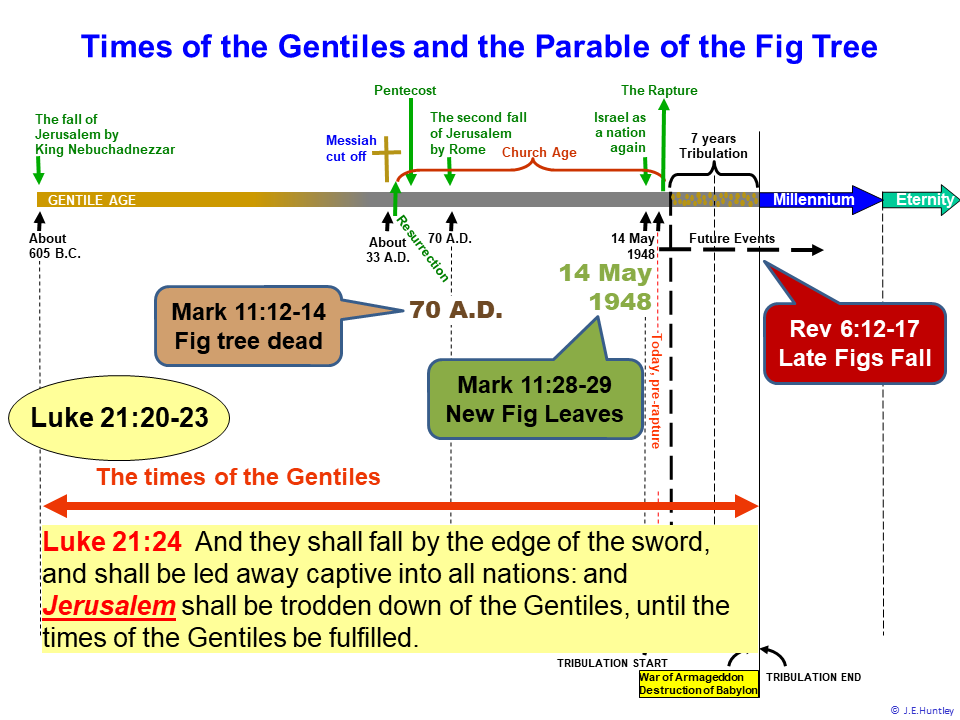 The parable of the Servant and the command to watch

This final timeline for Mark 13 is built upon the timeline above titled "The Blessing". Simply put, after the parable of the servant, the Lord warns everyone to watch. For the church today, it is to watch for the Lord's shout to rapture His church unto Himself to the clouds. For those after the rapture, the warning to watch is for the coming glory of the Lord and the restoration of all things over the entire world. 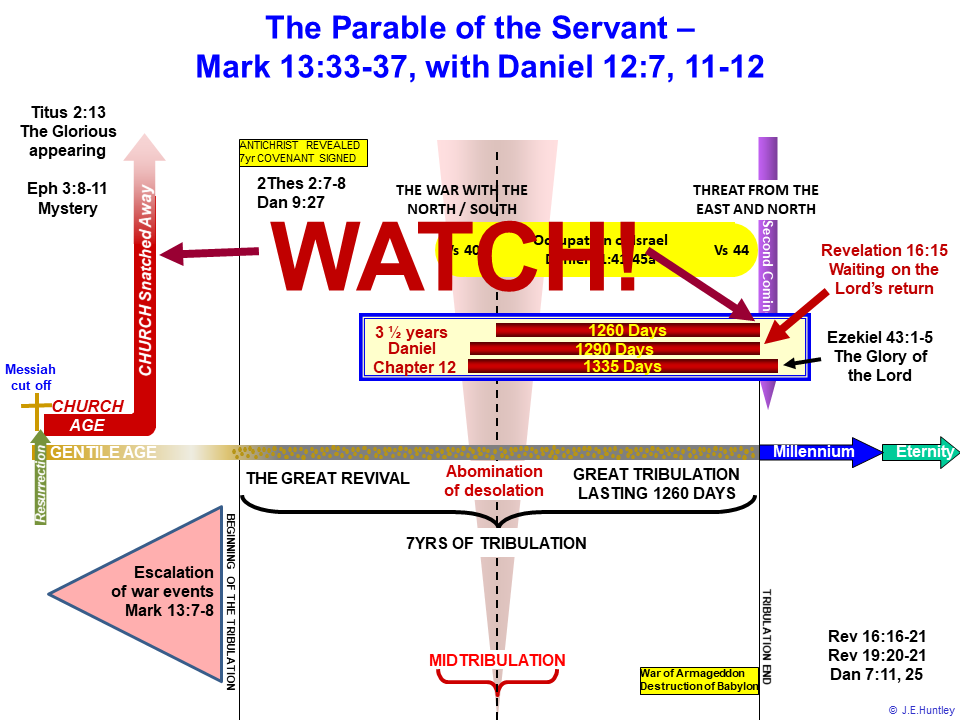