God appeared to Abram on a few occasions, but during one, God made a covenant with Abram that was for his descendants. This covenant was to give a specific land with identified boundaries. God also gave a time frame that Abram’s descendants would be out of the land, enslaved, but in the fourth generation they would return to the land promised to Abram, and they would retake the land. This 400-year delay was to wait for the iniquity of the Amorites to be completed, Genesis 15:5-21. The count of four generations began when Joseph and his 11 brothers first went into Egypt, and the fourth generation was when Moses led them on their exodus back to the promised land. At the start of the exodus, the Lord led Moses and children of Israel to the base of Mount Sinai, where God first met Moses in the burning bush, Exodus 3:1-12. It is from this location that the Lord appeared to all Israel, with Moses being the mediator between God and them. God told Moses that if the children of Israel obeyed God’s voice, kept his covenant that they would be a peculiar treasure to Him, above all the people, Exodus 19:5. Then the people replied to Moses that all the Lord had spoken, they would do, Exodus 19:8. So while the nation of Israel camped at the base of the mountain for a year, God gave them His commandments and law for them and all their descendants to follow and obey. This covenant was conditional, based on their obedience to God’s word. All that the God spoke at the mountain was directed to the nation of Israel, not to the Gentile nations. God’s plan was to reveal Himself to the world through Israel, Isaiah 42:1.

Identification of the party involved is:

The dispensational judgment was and will be:

The following timeline illustrates the beginning of the dispensation of the law with Moses and the giving of God’s law to the children of Israel. By the law, came the knowledge of sin, Romans 3:21, whereby all have sinned and come short of the glory of God, Romans 3:23. The dispensation of the law ends with the death of Christ Jesus on the cross, who as the testator died, Hebrews 9:16-17, and shed His blood for the remission of the world’s sins, Romans 3:25. It is by God’s grace that this gift is given, but we must accept this gift in faith, Ephesians 2:8-9, to attain eternal life, Romans 6:23.

Throughout Israel’s history, there had always been a remnant of believers that trusted in God, such as in the days of Elijah, 1Kings 19:10, 14, Romans 11:1-5

Even though God had separated a people, the Jews, to reveal Himself to all mankind, yet only a few of the entire Jewish population in the day of Jesus’ earthly ministry, believed Him to be the Son of God, Matthew 16:16, John 9:35-38, John 11:25-27. The timeline for the fifth dispensation illustrates the origin of this small remnant, the Little Flock, which Christ Jesus recognized during His earthly ministry. The Little Flock continued to preach the gospel of the kingdom after the death, resurrection and ascension of the Lord. They were the ones who received the power of the Holy Spirit promised by God the Father, Acts 1:8, Luke 24:49.

Paul asks the question “have they (Israel) stumbled that they should fall? God forbid: but rather through their fall salvation is come unto the Gentiles, for to provoke them to jealousy.” Romans 11:11, 9:32 (KJV)

There is a direct connection of this parable to Israel after they had stumbled by delivering their Lord and Christ to be crucified. As a nation Israel continued to fall following the death, burial and resurrection of Christ Jesus, except for a remnant of Jews who responded to the preaching of Peter, Acts 2:30-39. The nation of Israel chose not to believe in what they were told by the Lord’s apostles, and they remained in a state of rebellion against God.

During Paul’s ministry, he wrote an epistle to the believers in Corinth that God chose the foolishness of preaching to save them that believe. A person has to act on faith to belief in Christ Jesus for his or her salvation, since faith comes from hearing the word of God, Romans 10:17. Paul further characterized the reason for unbelief by both Jews and Gentiles, where the Jews require a sign and Greeks seek after wisdom, but Paul preached Christ crucified, which to the Jews was a stumbling block and foolishness to the Gentiles, 1Corinthians 1:21-25.

The following timeline is showing the succession of events of Israel that ultimately led to their spiritual fall, but not their demise. First, the timeline shows the point when Israel stumbled, which was at the cross. The timeline also identifies two groups in Israel. One group were the unbelieving mass of Jews in Israel and the second group were the small remnant of believing Jews, the Little Flock. These two groups moved into the next dispensation after the death, resurrection and ascension of Christ Jesus. 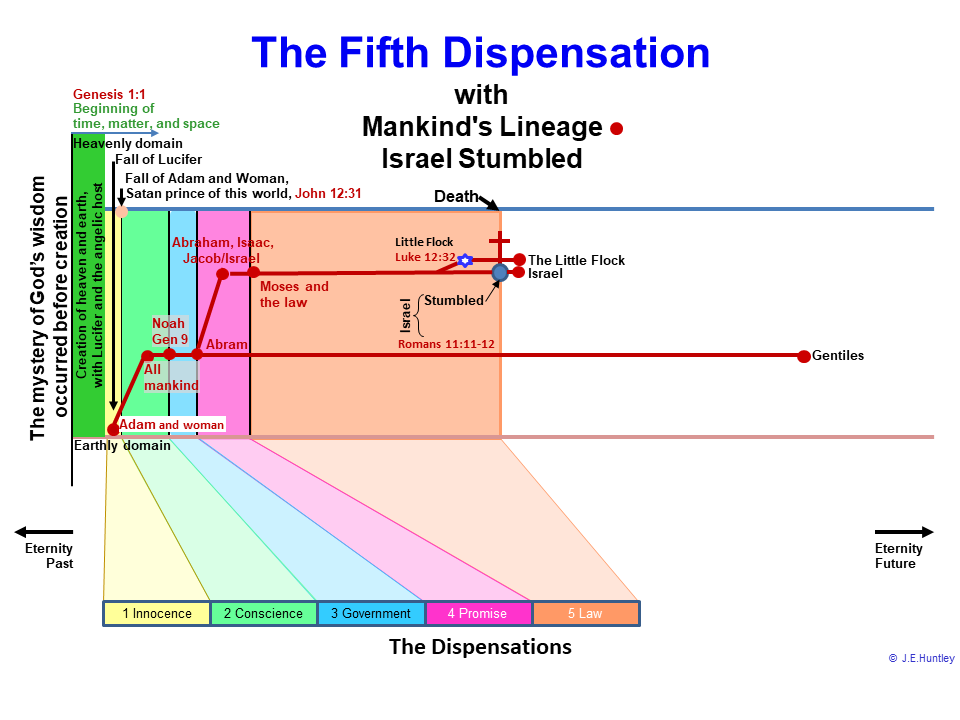