Before listing the alternate views in the interpretation of prophecy concerning end time events leading to the fulfillment of end time prophesy, it is important to mention the position presented by this web site is based on the premillennialist viewpoint. This web site teaches that the church will be raptured before the beginning of the seven year tribulation period. The Lord Jesus Christ will return to earth at the end of the tribulation and at the start of the battle at Armageddon, which will be the world's greatest and shortest battle in all mankind's history. Thereafter, the Lord will begin the first 1,000 years of His eternal reign. After the first 1,000 years of Christ's reign Satin will be released from the bottomless pit for a season, he will seduce the nations into rebellion against Christ in Jerusalem. God will suddenly end of all rebellion, the second resurrection for the unrighteous will occur and they will appear before the great white throne judgment, and finally eternity future will occur, where the Saints of God will be with him forever and the unrighteous will reside in the lake of fire forever. This is represented graphically in the blue section in the graphic below with the blue ellipsoids representing the pre-tribulation rapture of the Church. The ellipsoids distinguish the teaching of this site from a further segregation of the premillennial viewpoint from those who believe that the church will be raptured either at mid-tribulation or at the end of the tribulation period.

It is not the intent of this site to go into the reasons for not agreeing with the latter two arguments for the timing for the rapture of the Church, but there are many examples for the pre-tribulation view. Some early scriptural examples of the rapture before God's judgment in the Old Testament are the "rapture" of Enoch when he was taken before God's judgment by the flood, Genesis 5:21-24, God did not judge Sodom and Gomorrah until Lot and his family fled from there to the city Zoar which was spared because Lot and his family were there, Genesis 19:15-22. Moses was called up Mount Zion by God's voice after the loud sound of the trumpet, Exodus 19:18-20. Paul discusses this subject in 1Corinthians 15:50-57, 1Thessalonians 4:15-18. This view is also inferred in Revelation when John is called into heaven in Revelation 4:1-4, and the Church is then never mentioned in the following chapters which describe the tribulation events. The view accepted in this presentation originated with the early church fathers and takes the scripture literally in a grammatical and historical perspective.

There are several viewpoints in the interpretation of God's Word concerning the end times. They can generally be grouped into three viewpoints; premillennial (the blue section in the graphic below), amillennial (the white section in the graphic below), and postmillennial (the tan section in the graphic below). Each of these viewpoints can be further segregated into other threads of thought, as indicated in the previous paragraph with the premillennial view point being divided into a pre-tribulation, mid-tribulation, or post-tribulation rapture of the Church. Another example for the Amillennial viewpoint, there is a general thought that the church is the fulfillment of the promises given to Israel, and that the millennium in being fulfilled spiritually since Christ already reigns over all things and is victorious over Satan. A variant of this viewpoint is the Preterest view that finds fulfillment of many judgments in Revelation fulfilled in the destruction of Jerusalem in 70 A.D.. In either case, Revelation 20:1-15 is not literally interpreted. Similarly, the postmillennial view point does not literally interpret Revelation 20:1-15. In general the postmillennial view holds that the last 1000 years of church history will be the millennial period.

Though believing men and women in the Lord Jesus Christ with a pure heart, good conscience, and sincere faith, hold firm to any one of these interpretive viewpoints, or their variants, this difference does not diminish their place in Christ. It is a nagging question why sound believers in Christ could have such differing views when there is such strong agreement on the Deity of Christ, His virgin birth, His purpose in His first advent to redeem all mankind from their sin by the shedding of His blood on the cross. One can argue that holding a non- premillennial, pretribulation view diminishes the fullness of God's word and His promises to all the Saints for peace, comfort and joy during the tumultuous times leading up the tribulation. These alternative views do not to accept everything stated by the Lord as literal where the passage and other scripture indicate that it should be interpreted. Indeed, there are difficult areas in each of the methods interpreting scripture's prophetic passages about the end times, but the reader is encouraged to know that God is able to perform all that He said, in the time He said it would be occur, and in the manner He said it would be fulfilled. There was no need to spiritualize, or not take literal, any of the prophetic passages concerning the Lord's first advent. Even then there were difficult passages concerning the Messiah's birth, but a few did know and believed having prepared themselves to waite for the birth of Jesus. The Holy Spirit brought light to some of the passages at the time of the writing of the gospels and epistles to show all the Old Testament passages that related directly to the Lord Jesus Christ's first advent. Similarly, passages concerning all aspects of our Lord's return do no need to be spiritualized to circumvent our lack of understanding. Take to the Word as it is written, and in time understanding and increased knowledge will be given to us by the Holy Spirit to comprehend those difficult passages. 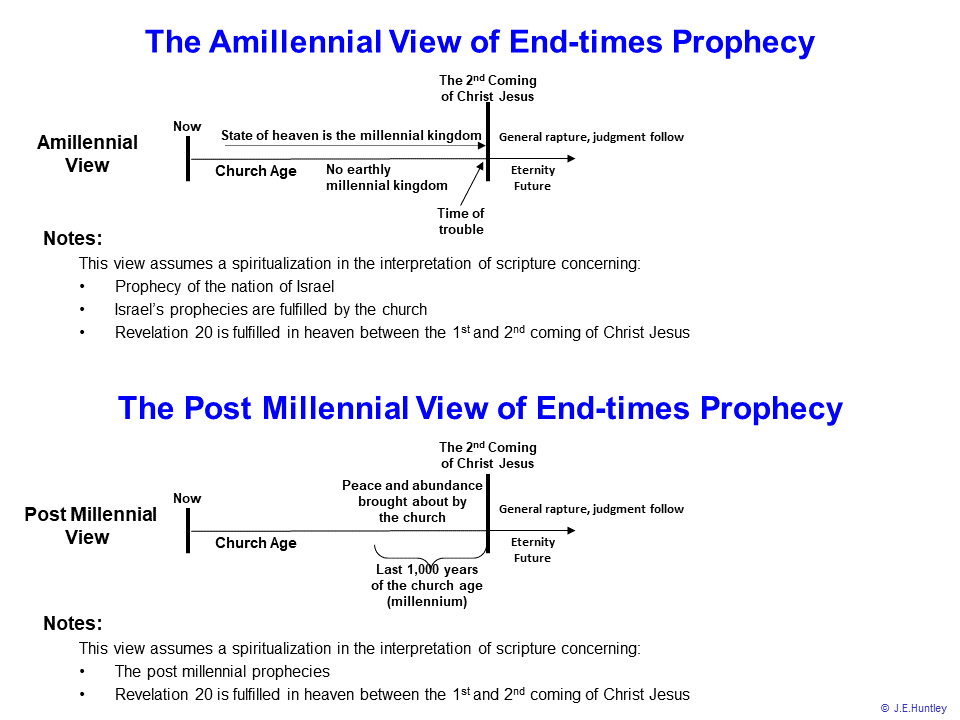 For more information on this subject, the Blue Letter Bible site is a great resource. They have a brief description on the "four views of the millennium" of interpreting end times prophecies, focusing in on Revelation 20:1-15. In the event that they modify their internal links, you can find their discussion in the HELP/FAQs internal link, then locate their theological FAQs link, then finally under the section on eschatology, select the link on the "four views of the millennium." There you will find their concise description on Dispensational Premillennialism, Historical Premillennialism, Postmillennialism, and Amillennialism. They do conclude that there is not complete consensus among the members on the Blue Letter Bible team on this issue, but on the whole, they do agree and promote the dispensational premillennialism, which this site also supports.