Before Genesis 1:1, God planned everything for mankind, Luke 14:28-30, Romans 8:28-30, including the means for salvation that would be necessary after the fall of Adam, Romans 8:31-36. All of this was finished before His first creative work began. Preparations were made, and books written for the names of believers, such as the book of life of the Lamb slain from the foundation of the world, Revelation 13:8, or the book of life, Revelation 17:8. The evening of the Lord’s betrayal, in His priestly prayer, Jesus looked back at eternity past, praying to the Father for the believers, that they should see His glory that the Father gave Him, because the Father loved the Son before the foundation of the world, John 17:4, 24. The Lord’s sacrifice and His shed blood for our redemption from sin was foreordained before the foundation of the world, 1Peter 1:18-21. Peter also warned the nation of Israel to prepare for the coming of the Lord to establish His kingdom, by repenting and believing in Jesus as their Messiah that their sins may be blotted out, and that God had spoken these things by the mouth of all His prophets since the world began, Acts 3:19-21.

Paul spoke of God’s plans for Israel whom He foreknew, Romans 11:2, and the Lord told His disciples that they did not choose to follow Christ Jesus, but He chose them, John 15:16, 19. John wrote that we love Christ Jesus because He first loved us, 1John 4:10, 19. Paul wrote concerning the Body-of-Christ, where God made plans for them in eternity past according to His purpose, Romans 8:28-29. Paul explained that those in the Body-of-Christ, God foreknew, and He called them. The purpose was that each person in the Body-of-Christ would be conformed to the image of His Son, Romans 8:29. Paul went on to show this plan of God was from eternity past to eternity future; that those whom He predestinated and called, were justified and glorified, Romans 8:30. This was all God’s wonderful plan before He began creation. God loved us before the beginning of time, and He has a unique design for each life that believes in Christ Jesus, and the gospel, 1Corinthians 15:1-4, and has been presented to all mankind, Titus 2:11-14, 2Corinthians 6:1-2.

For the nation of Israel, Zacharias, being filled with the Holy Spirit and the father of John the Baptist, revealed that God had visited and redeemed His people by raising the horn of salvation in the house of David. This horn was Jesus, who was born six months later to Mary, as spoken by the prophets since the world began, Luke 1:68-70. During the Lord’s earthly ministry, He spoke in parables, kept secret from the foundation of the world, as prophesied, Matthew 13:34-35, Psalms 78:2. The prophets of the Old Testament revealed God’s Word, but they did not understand when these things would take place, 1Peter 1:10-12. Even at the end of the tribulation, when Christ Jesus will sit on the throne of David, He will judge the nations and divide them as sheep and goats. And to those on His right hand, the sheep, He told them to take the inheritance of the kingdom that had been prepared from the foundation of the world, Matthew 25:32-34. To those on His left hand, the goats, they will be told to depart, that they were cursed into everlasting fire (the lake of fire, Revelation 20:10-15), that was reserved for Satan and his angels, Matthew 25:41.

God promised the Body-of-Christ eternal life before the world began, Titus 1:2. The details of God’s preplanning was revealed to Paul, who wrote to the Corinthians about the wisdom of God, which before was a mystery. This was hidden wisdom God ordained before the world for our glory. None of the princes of this world knew this (Satan and his angels, John 12:31, John 16:11), for had they known, they would not have crucified the Lord of glory, 1Corinthians 2:7-8. Paul also told Timothy that the Body-of-Christ was called with a holy calling, according to God’s purpose and grace, given us in Christ Jesus before the world began, 2Timothy 1:9, Colossians 1:25-26. God chose the Body-of-Christ, 1Corinthians 12:27, before the foundation of the world, to be holy and without blame before Him in love, Ephesians 1:4, Romans 16:25-26.

The following diagram represents the preparation God made for mankind before Genesis 1:1. The important characteristic of His plans God made was man’s redemption from sin. God foreknew Adam would sin, even though God made everything very good, Genesis 1:31. God gave man a perfect environment in which to have dominion over, to cultivate, live, and procreate in, Genesis 1:28-31. God did not determine that Adam would sin, instead, Adam made the choice. Faced with the decision about the fruit from the tree of knowledge, Genesis 2:17, Woman gave him, after she ate from the fruit, Genesis 3:6, Adam was faced with a great dilemma. He could either rely on God for His help to save his wife, or enter into sin with her, knowing the consequences of his actions, Genesis 2:16-17.

Rather than trusting in God who created all things, Adam chose to fall with his wife, Genesis 3:6. Nevertheless, to make the way of salvation for man, Jesus, made the way. Jesus is the author and finisher of our faith, who for the joy that was set before Him, endured the cross, Hebrews 12:2. It was because of God’s love for man that He gave His only begotten Son so that whoever would believe in Him, would have everlasting life, John 3:16. God is the one in eternity past who made all the preparations for mankind throughout our history on this earth for our salvation, making all the effort to make the pathway to salvation free to man, Romans 8:28-35. There is nothing for man to do, or can do, to receive the free gift of God. It is only by God’s grace that He gave His Son, who shed His blood to redeem us from sin, that through faith and faith alone, we would have peace with God, Romans 3:22-28, 5:1-12, Ephesians 2:8-9. 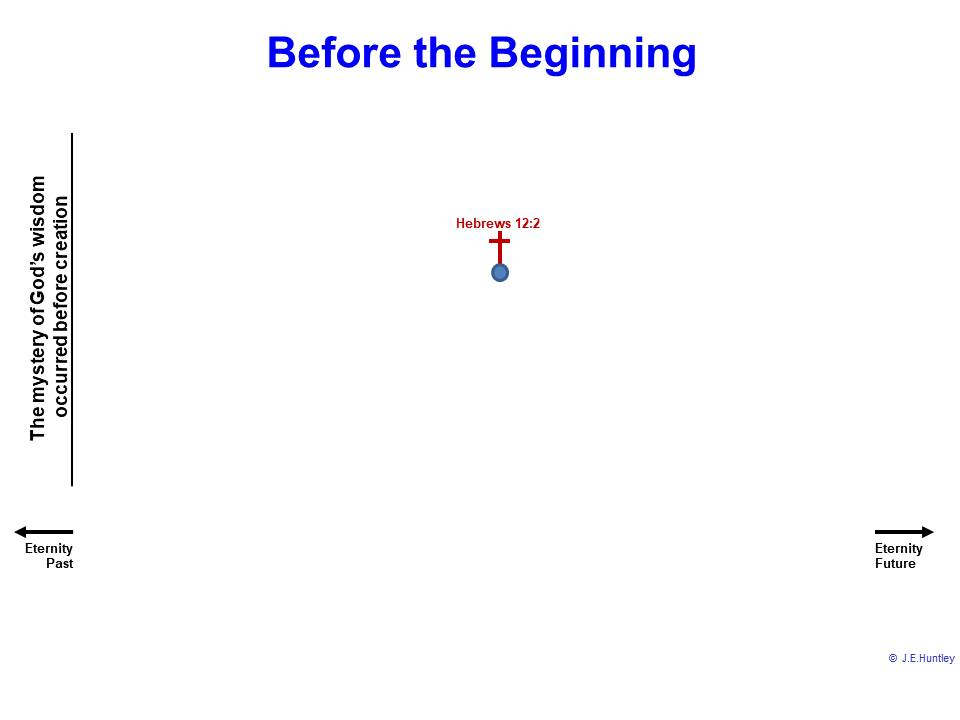 In the beginning, God then created the heaven and the earth, Genesis 1:1. At that time, Lucifer and the angelic host were also created. As God began to create the heaven and the earth, Lucifer and the rest of the heavenly host sang together and the sons of God (angels), shouted for joy, Job 37:4-7, Psalm 104:4-5. At his beginning, Lucifer (who became Satan after sin was found in him), was the son of the morning, Isaiah 14:12. The name “Lucifer” means light bearer, and he was covered with nine precious stones. God gave Lucifer tabrets and pipes at his creation for worship, and to lead creation in worship of God on the holy mountain of God, Ezekiel 28:12-14 (the high priest of Israel wore a breastplate of judgment with 12 precious stones, Exodus 28:15-21). Lucifer was the anointed cherub who guarded the throne of God, and was in the garden of Eden.

The following graphic illustrates the time God began to create the heaven and earth, Genesis 1:1, and construct two domains, the heavenly domain and the earthly domain as God created the heavenly host (including Lucifer), then Adam and Woman. At the end of time. Then God’s plan will come to full fruition, where in the fulness of times He will gather together in one all things in Christ, both in heaven and earth, Ephesians 1:10. Lucifer and the angels were in the heavenly domain, whereas Adam and all mankind were to occupy the earthly domain. This too is when God created time, matter and space. 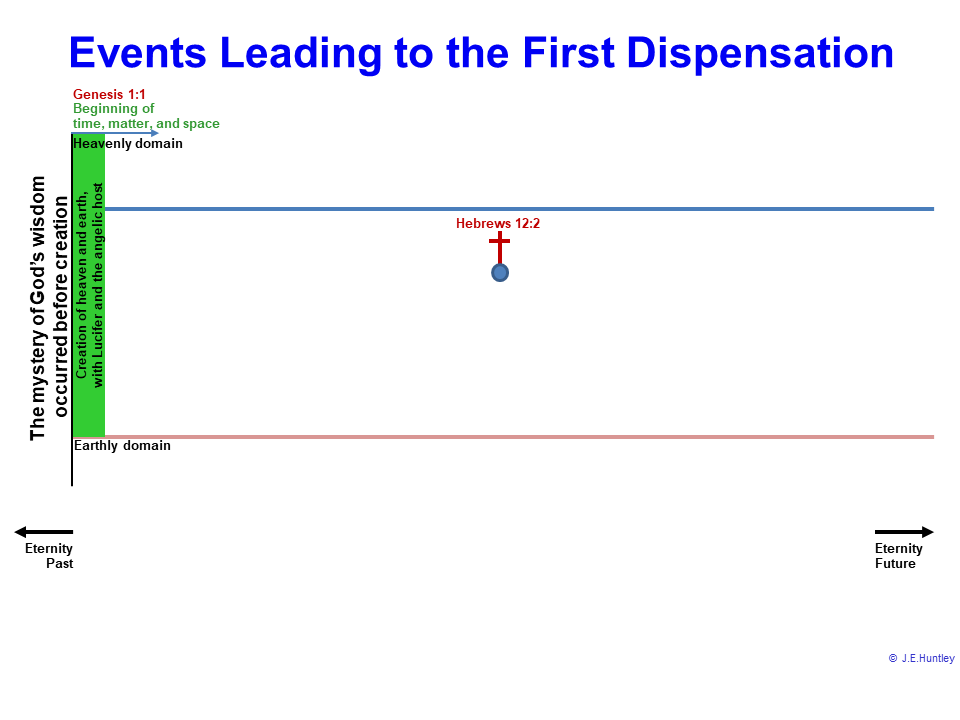 Lucifer was perfect in his ways until iniquity was found in him, Ezekiel 28:15. When Lucifer gazed upon his beauty, his wisdom, then looked at God, and said "I" should be like the Most-High God, Ezekiel 28:17, Isaiah 14:14.

The fall of Satan (who was Lucifer before the fall), occurred sometime after God saw that everything He made was very good, Genesis 1:31. He had already fallen before he tempted the woman, Genesis 3:1-5, and before Adam fell, which brought sin into the life of mankind, Romans 5:19.

At the center of Adam’s fall was the lie of Satan. It was a perversion of God’s Word to Adam, an ugly façade about God and His love for Adam and woman, Genesis 3:1-5. Like Satan, those who are in the kingdom of darkness, change the truth of God into a lie, and worship and serve the creature more than the Creator…, Romans 1:25. The essence of the lie is to make man’s will the absolute authority rather than God's Word. It is also to change God's truth that He is the absolute authority into a lie, claiming that authority to yourself or to another person, 1John 2:11. A consequence of Adam’s fall is that all mankind inherits Adam’s sin nature, and as a result, all are born into Satan’s kingdom until each person believes the gospel (the good news of Jesus Christ), Colossians 1:13, 1Corinthians 15:1-4. Another consequence of Adam’s fall is that he lost the dominion over earth that God had given him. Adam’s positional authority over the earth, was then taken by Satan, who became the prince of this world, John 12:31. Satan usurped the authority God had given Adam in the earthly domain, Genesis 1:26-30. These events are illustrated in the following chart. 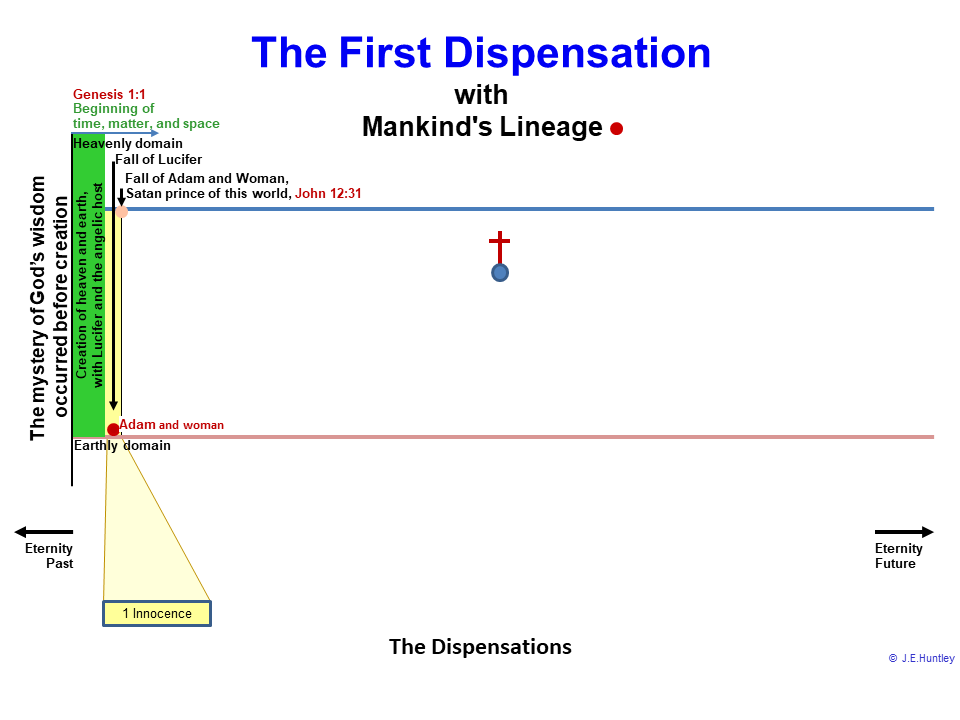