This epistle from Paul to the Thessalonians is one of clarification with respect to the day of the Lord. The church was encountering growing persecution from Rome, and in the worship of the Caesars. There is no doubt that these young saints were confused as to whether they were encountering the end times as Paul had described. At this point, the book of Revelation had not been written, so the context of the Lord's return was referenced through Paul's teaching, as well as from Old Testament scripture.

The second epistle of Paul to the the Thessalonians was written while he was at Corinth, Acts 18:1-18. The following are highlights of Paul's second missionary journey into Greece, which can be seen on a map provided by Precept Austin.

1Thessalonians is about the Day of Jesus Christ, the snatching away (rapture) of the church. 2Thessalonians is about the Day of the Lord, judgment on the world. The elapse in time between when the first and second letter is not definitively known, but it could have been a few short months. Paul likely wrote this letter in response to a report from Silas and Timothy when they returned the second time from Thessalonica. The occasion for this letter was:

In 2Thessalonians 1:1-2, Paul's greeting to the church continues to strengthen the joint relationship that he shares with the believers at Thessalonica in the Lord. This is illustrated in this greeting where Paul says "in God our," which was “the” in 1Thessalonians 1:1, and continues with ...Father and the Lord Jesus Christ. This greeting shows an intimate relationship between the Church and God, and the identification of Paul with the believers at Thessalonica, by the use of the word 'our.’ The second verse likewise, in comparison to the first letter to the Thessalonians, is showing greater identification between the church and God, by showing that grace and peace are from God (as interpreted by the New International Version (NIV)).

In 2Thessalonians 1:5-10, there are two parts of these verses that are very important to all Christians. First, our suffering is evidence of God’s righteous judgment, in that our focus is not on our welfare, but on the kingdom of God and His glory, as mentioned in the Beatitudes, Matthew 5:10, and as spoken of by Paul concerning his thorn in the flesh, 2Corinthians 12:7-10, and to the Philippians, Philippians 1:27-28. Similarly, the propet Obadiah also spoke on the matter of suffering, when he prophesed against Edom for assisting Israel’s enemies and rejoicing in their judgment, Obadiah 1:12-13. Paul told Timothy that if we suffer, we shall also reign with Him, 2Timothy 2:12. We cannot anticipate when the judgment of God will occur or how it will be manifest.

Second, suffering has a purpose; to bring glory to God and demonstrate our worthiness to share the rule of the kingdomin. It is important to note that the latter does not make us worhty to be part of the kingdom, since once we believe in the gospel taught by Paul, 1Corinthians 15:1-4, there is no condemcation to them who are in Christ, no longer walking after the flesh but after the Spirit, Romans 8:1. We are to be conformed to the image of Christ, Romans 8:29, and our character is shaped to reflect the Lord, Colossians 2:6-7, James 1:2-5. The Lord sustains and establishes His own, 1Peter 5:6-11. This is a continuation of the contrast between those who are in the light versus those who are in darkness, 1Thessalonians 5:4-11.

The Lord gives promises to the suffering churches of Smyrna, Revelation 2:8-11, to believers in Thyatira, Revelation 2:26-27, and to all the churches, Revelation 3:21-22. Peter also wrote about the suffering of believers, 1Peter 4:16-19. Important for all Christians to remember is that God is faithful in all things, 2Timothy 2:11-13. Our role as Christians, is to be like Christ as a servant, Matthew 20:25-28. Being in Christ, Christians are adopted sons and will receive the kingdom upon the return of the Lord to establish His millennial kingdom, Daniel 7:16-18.

In all these references concerning suffering, believers are not taught or encouraged to leave or go somewhere else to avoid persecution. Instead the Lord instructed the believers in Smyrna to be faithful unto death. The promise to believers in Christ (he that overcomes), will not be hurt in the second death, Revelation 2:10-11. Today, in the dispensation of Grace, it is important to remember that the believer's citizensahip is not on earth, but in heaven, Philippians, and because we are risen with Christ, we are to seek those things which are above, where Christ sits on the right hand of God, Colossians 3:1.

In 2Thessalonians 1:6, the righteous judgment of God will be evident in His time, and not necessarily in our time, and in His way, not the way we may want! However, some judgments that were not immediately imposed in scripture were delayed after the warning was given:

The purpose of God’s judgment is to vindicate His righteousness, not for personal satisfaction to see others suffer in a form of payback. Our ways and thoughts are not God's way, Isaiah 55:8. David had asked God to not be far from him, but vindicate David on his enemies in God’s righteousness, Psalms 35:22-24. Paul wrote to the Philippians concerning the suffering they were enduring from the persecution and the destruction of those who opposed them. He encouraged them to stand fast together in one spirit, to strive together for the faith of the gospel, and not to be terrified by their adversaries, Philippians 1:27-30. During the tribulation, the martyred saints before the throne of God are told to rest while their numbers continue to increase, then God will judge, Revelation 6:9-11. When judgment is sent, the martyred saints declare God’s righteousness in the matter, Revelation 15:1-4. in everycase, God’s judgements are measured, not arbitrary, Genesis 15:16, Isaiah 51:17, 22, Jeremiah 25:15, Jeremiah 49:12, Revelation 14:9-10, Revelation 18:4-6.

In 2Thessalonians 1:7, the relief promised from God to His saints is in the future. He will dispense the final judgment when the Lord returns to earth with all His angels and saints. In his visions, after the thrones were thrown down, Daniel saw the Ancient of days sit, ministered by thousands upon thousands. The beast was slain and his body thrown to the lake of fire, Daniel 7:9-11, Revelation 19:20. Then Daniel saw the Son of man come with the clouds of heaven, came to the ancient of days, and He was given dominion, glory, and a kingdom, that all people, nations, and languages should serve Him; His dominion is everlasting and shall not pass away and shall not be destroyed, Daniel 7:13-14. Before the end, though, the Antichrist will prevail against the saints, Daniel 7:24-25. But after the Antichrist is destroyed.

In 2Thessalonians 1:8-10, those who do not know or obey the Lord will be punished. All will be judged, Romans 2:5-11. This is a time of reckoning, and the true believers are separated from those only professing the truth, but never knowing the power of the truth, 2Timothy 3:5-9. This is also the time of separation, when not everyone calling on the Lord will be saved, for they were false teachers, Matthew 7:20-27, 2Timothy 2:15-17. Those punished will be permanently shut from the presence of the Lord. On the day He comes to be glorified, He will be glorified in His saints and be marveled upon by those who believe. The judgment of God is not annihilation, as some erroneously teach. Rather, those who are judged, will be in a permanent state of consciousness under judgment through eternity. The following graphic is a simple schematic of the choice each person ever born in this world have to make, and the two consequences of that choice, either to be in glory with the Lord, or eternally condemned in the lake of fire. 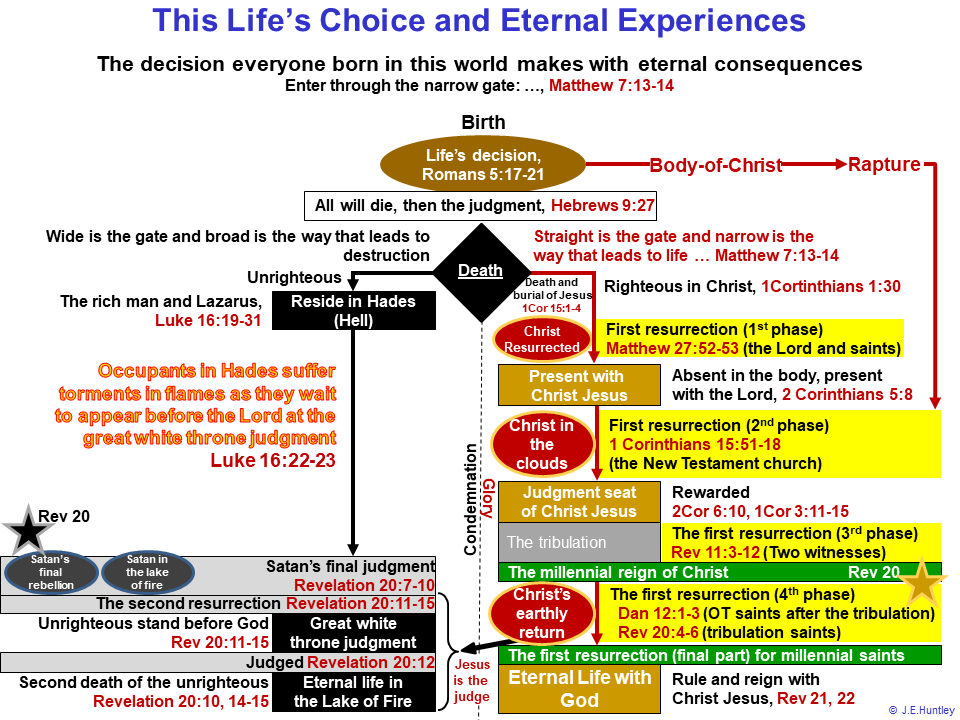 The angel pouring out the third bowl judgment at the end of the seven years of tribulation declares God’s righteousness, and the altar, or those under the altar respond in agreement, Revelation 16:4-7. This is not a reference to the great white throne judgment, but the end of the tribulation. The survivors at the end of the tribulation have sealed their eternal state if they either worshiped the beast or accepted the mark of the beast, Revelation 14:9-12. Keep in mind that the Lord is not slow in keeping His promise, but is patient, not wanting any to perish, 2Peter 3:9. If you have not made the decision to believe in the Lord Jesus Christ as your Savior and Lord, do so now. Follow the link to the page on salvation to see how you can accept the Lord in your life and become a child of God.

Punishment of the unrighteous will be everlasting after the great white throne judgment. They will be permanently removed from the Lord’s presence. However, this is also the day the Lord is glorified in His holy people, marveled at by those who believed, 2Thessalonians 1:9-10.

In 2Thessalonians 1:11-12, Paul is encouraging the church again through the example of his prayer life: