The following time line illustrates the temporal space of the events discussed on Ezekiel 36. It demonstrates the dual application of prophesy that is sometimes present in scripture. This is illustrated in Ezekiel 36:1-5. The Lord judged the Edomites for coveting the land of Israel as the Jews were taken away to Babylon into captivity. The Land is the Lords to give to whom He will. As a result of their sin, the Edomites were destroyed as a people, their land was left desolate, and their land will never be repopulated by their descendents. This is in stark contrast to the Lord maintaining a remnant among the children of Israel who have returned to the Land of Israel, first after their Babylonian captivity, and again after their worldwide dispersion by the hands of the Romans in 70 A.D.. What had happened with the Edomites will hold true for those who neighbor Israel and covet the land of Israel today. The land is still the Lord's, and as seen in the final climatic events leading up to the battle of Armageddon, He will destroy all who seek to take the land for themselves and attempt to destroy the people of Israel. Israel is the apple in the Lord's eyes, Zechariah 2:8-10 (see the discussion on Armageddon on this site). The long yellow horizontal arrow in the graphic below shows where the first judgment occurred, followed by the increasing judgment that is upon those in our days who seek the land of Israel for their own purposes.

The star burst for Ezekiel 36:6-7 relates to the second coming of Christ as described in Revelation 19:11-21, (see the discussion on the return of Christ on this site). This is a singular event and the battle is not protracted once the Lord returns, but ends quickly with His return.

The second horizontal arrow below, for Ezekiel 36:8-15 is indicative of the response of the land to the surviving Israelites who are returning to the land after the battle of Armageddon. The earth will be dark and polluted immediately following the tribulation, but the land will be healed by the Lord, Isaiah 65:17-25.

The third yellow bar extends from the mid-tribulation point all the way through the millennial reign of Christ. This is the time also described by the Apostle John in Revelation 12:1-17, when the remnant of Israel will flee into the wilderness, Revelation 12:6, and as described on this site on Revelation 12.

The final yellow bar shows the full response of the land of Israel in fulfillment of all the Lord's promises to the children of Israel, Ezekiel 36:33-36. It will be incomparable to any other location in the world, and it will occur when the glory of the Lord reigns in His temple during His millennial reign.

The second timeline graphic is the aggregation of the timelines from Ezekiel 34:1-31 through Ezekiel 36:1-38. The utility of this graphic is to show the faithfulness of the Lord to His word in the restoration of Israel in our days, and how she will be fully restored to all of her land in peace, within the covenant of peace that the Lord has made with them. They will again bask in the presence of the Lord God of Israel with a renewed relationship under the new covenant the Lord will make with His people. Prior to that time, though, there will be a great time of trouble that they will have to go through, which is the seven years of tribulation. 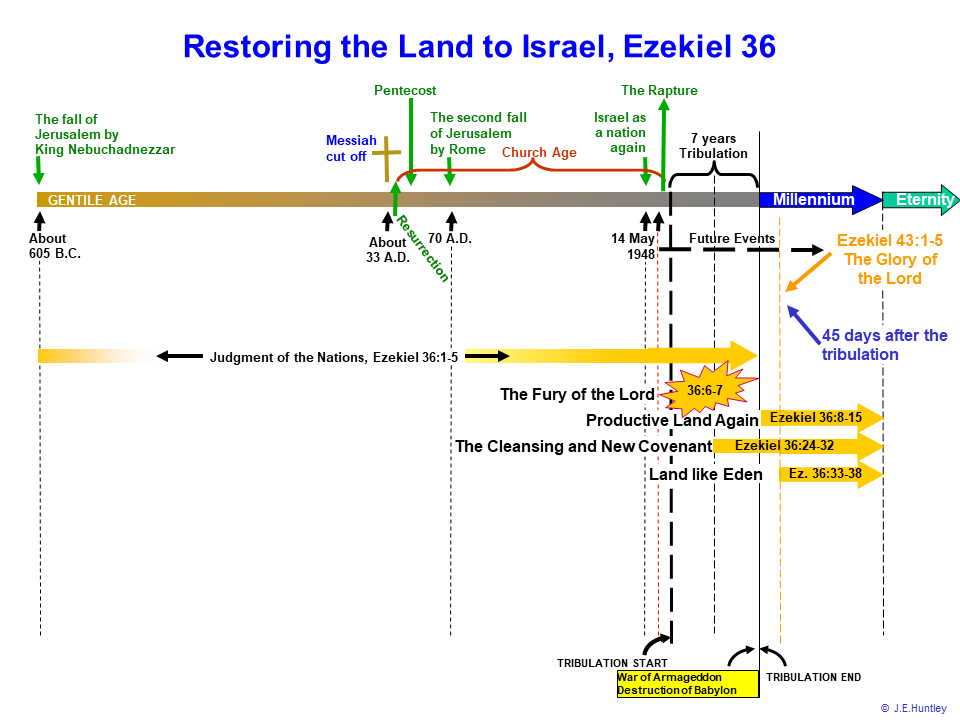 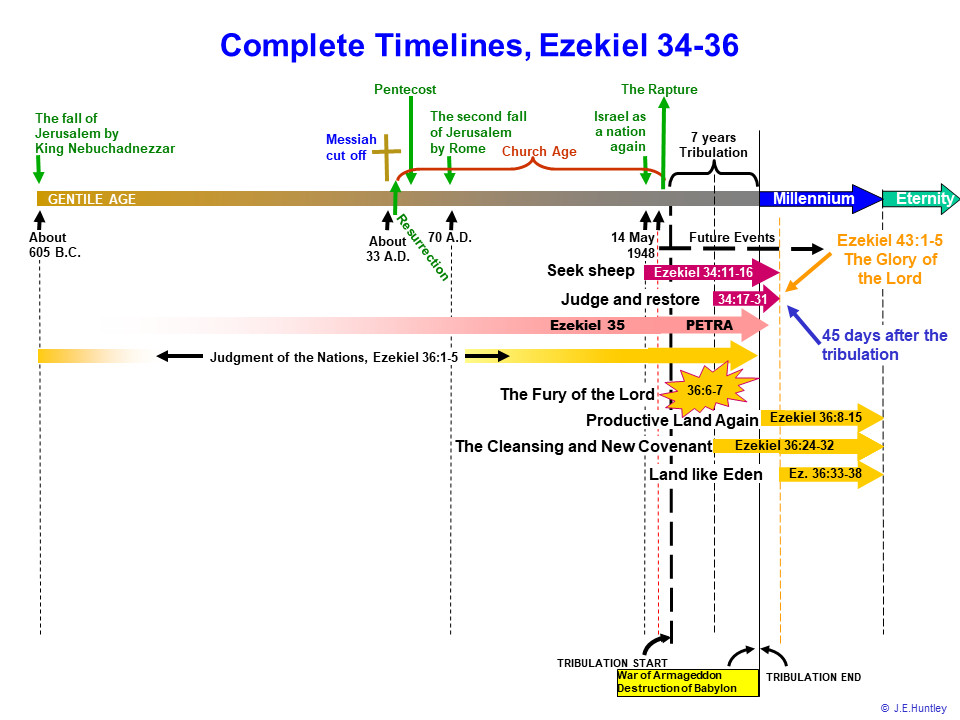