In revealing God’s future for Israel, Ezekiel wrote in:

Ezekiel 37:1-28 looks forward to Israel’s complete restoration. This chapter provides a striking display as changes occur in Israel’s physical and spiritual condition as the Lord progressively restores life into the nation. The beginning of this chapter displays an incredible bleakness in the state of Israel. Since their worldwide dispersion by Titus in 70 A.D., the Jews had been a people with no nation or land to call their own, until 1948, Deuteronomy 28:62-67. That period of time in their history is dramatically characterized as a valley of dry bones, from 70 A.D. to 1948. Yet, the many prophecies in just this one chapter show a tremendous rebirth of the nation of Israel. There are many other prophecies left unfilled in scripture until the Lord becomes their God and they His people, Ezekiel 20:33-38.

There are four main sections to this chapter:

This chapter provides striking changes in Israel’s spiritual condition as the Lord restores life into the nation. Some of these changes have occurred in recent history, with the Jews returning to their promised land, and the reconstitution of the nation of Israel.

The valley of bones 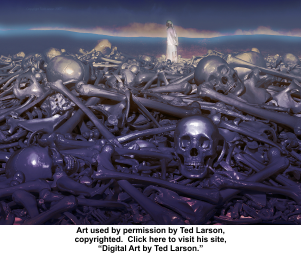 Ezekiel 37:1-28 provides a striking display of the changes in Israel’s spiritual condition as the Lord restores life into the nation. Ezekiel 37:1 opens with a display of incredible bleakness with respect to the nation of Israel as a people. Since their worldwide dispersion by Titus in 70 A.D., the Jews had been a people with no nation or land to call their own, until 1948. During that interval of time they have been a scattered nation, in essence a nation of dry bones. Ezekiel 37:2-3, Ezekiel was led to walk among the bones and inspect them, where:

So, in Ezekiel 37:4-6 the Lord spoke to Ezekiel again and told him to prophesy to the bones, and to say to the bones, "O ye dry bones, hear the word of the LORD." The Lord gave Ezekiel the exact words to say, which showed what these dead, inanimate remains of man would do in response to the word of the Lord. God works through the prophets to deliver His word and provide signs of His Son’s arrival as Israel’s messiah, Luke 24:25-27.

Upon the prophetic word of the Lord through Ezekiel, the Lord brought life into that which was utterly dead, putting on new flesh onto the bones. The end result would be that these newly reborn people would know the whom their Lord of God, the God of Israel was. This is the time of the cleansing and of the new covenant that the Lord revealed to Ezekiel in Ezekiel 36:24-32.

The prophesy over the bones

Imagine the sight of Ezekiel yelling the word of the Lord over the bones. His words had to be said with the earnest expectation of seeing how the Lord was going to accomplish all that He said. In Ezekiel 37:7-10, after Ezekiel spoke, he observed the assembly of all the bones into their proper positions, and then the flesh that came upon them, but there was no life in them yet. So the Lord told Ezekiel to next prophesy to the wind and say the word of the Lord, that the wind from every direction was to come into these slain bodies that they might live. When Ezekiel did so, he observed a great army before him, standing and with life. The time when they became a nation is when the bones came together and flesh came upon them. The four winds indicate the gathering of the people of Israel from all parts of the world to again populate their land.

However, at present the nation of Israel has yet to accept the Lord Jesus Christ as their messiah nationally (though individuals Jews have believed that Jesus is their messiah). As a result of the national disbelief, there is no spiritual life in them as a nation. This new life will not occur within the nation until the middle of the tribulation period, when they will be with Christ and made to pass under the rod, as written earlier in Ezekiel 20:33-38.

The Lord provided Ezekiel the meaning of the entire prophecy of the dry bones, which represented the complete and fulfilled rebirth of the nation of Israel, Ezekiel 37:11-14.

The latter verses provide no time interval in which these events concerning the dry bones will occur, similar to Daniel 9:24-27. However, examining the passages given in the book of Hosea and the 2nd epistle of Peter provides critical information to fill in the gaps, as indicated in the discussion on this site on the Ezekiel 37 timeline. In Hosea 6:1-3, the children of Israel return to the land to enjoy the blessings of the Lord, where after two days the Lord will revive the nation, and on the third day they will rise again, just like these passages above, Ezekiel 37:7-10. 2 Peter 3:8-9 then provides the relationship of time between what is experienced by mankind and what the Lord sees, where one day with the Lord is as a 1000 years. Similar to the prophecy of the dry bones, the prophet Hosea writes to the people of Israel that after two days, or 2,000 years since their worldwide dispersion, that the Lord will revive them. This is represented in Ezekiel as the dry bones coming together with flesh. Then in the third day, or during the millennial reign of Christ, Israel will be revived and live in the sight of the Lord.

Since the early history of Israel, during the age of her kings, the nation became divided after the death of their third king, Solomon. Ever since then, they were divided nation with two kings, until they were no longer a sovereign nation, and were instead under the rule or major influence of the Gentiles. More is discussed on the age of the Gentiles on this site's discussion on the Olivet Discourse in the Mark 13 timeline. Approximately three millennia have elapsed since Israel's division into the northern and southern tribes. Here, the Lord speaks again in Ezekiel 37:15-17 to say that Israel will no longer be divided but become a single, united nation during the millennial reign of Christ.

Ezekiel 37:18-23, is a rehearsal of how Ezekiel is to respond to those who ask what is meant by all these signs, where:

The united nation is symbolized by the joining of two sticks, when He brings the people of Israel back into their land and they again be one nation. They will no longer be divided into the northern and southern tribes, as occurred during the days of King Rehoboam, nor will they ever defile themselves with idols or any other form of transgression, Ezekiel 37:21-23. That the nation of Israel will know the Lord their God, and the Lord will be their God, have been consistent and repeated statements in these few chapters in Ezekiel. There will be a total spiritual and physical reparation between the Lord and His people, the Lord with the land, and the people with the land.

During the millennial reign of Christ, Ezekiel 37:24-25 indicates that David will be resurrected and again serve the Lord as King over Israel. There is some debate whether David will rule or if this is just symbolic of the Lord who is in the line of David will rule. It may very well be that the former will be true, that David will ascend to his throne over Israel, primarily because of the parceling of the land of the future Israel during the Millennial reign of Christ. At that time, there will be two parcels of land set aside for the prince, one to the east of the millennial temple, the other to the west of the temple, Ezekiel 48:21-22. There is a prince identified among those of Israel who will have a physical body, since in those days there will be a mix of peoples who are in their fleshly bodies, and those in their resurrected eternal bodies, see the discussion on this topic on the web page on Matthew 25 timeline. One parcel could be for the physical prince, and the other may be for the resurrected King David. This is not meant to be a dogmatic statement, but merely a suggestion, since scripture does not fully expose the result. Nevertheless, the Lord will rule the world as shown in Psalms 2:1-12, where:

The complete purpose will be that the entire world will know that the Lord has sanctified the children of Israel and that His sanctuary is among them. Psalms 2:1-12, Ezekiel 37:26-28. This is a permanent relationship that will last on through eternity future. The Lord's tabernacle will always be within them, and the relationship between the Lord and His people will be unchangeable forever, and He will dwell with His people. The Lord will make a covenant of peace with His people where: