Ezekiel 47:1-23 is focused on the further division of the entire land, and the healing power of the waters that will originate from out of the sanctuary eastward out of the temple area, with a branch leading toward the Dead Sea and the other branch toward the Mediterranean Sea. 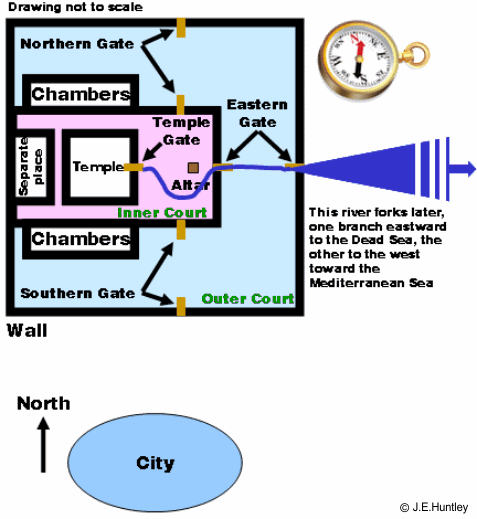 In Ezekiel 47:7-9, the bronze man led Ezekiel back to the riverbank where Ezekiel saw a great number of trees on each side of the river, which was similar to the garden of Eden, Genesis 2:8-10. 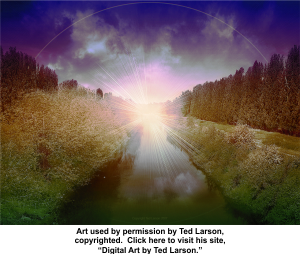 The angel informed Ezekiel that the water flow continued on toward the east, and fed into the Jordan Valley, and ultimately into the Dead Sea. There was also another branch of water that flowed westward into the Mediterranean Sea, Zechariah 14:8. The Dead Sea will no longer be dead nor salty as a result of this water flowing from the sanctuary. The water in the Dead Sea will become fresh. A great number of creatures will come alive wherever this water flows, including the area that is dead today. This is very similar to the creation on the fifth day, Genesis 1:20-23.

Ezekiel 47:10-12 demonstrates the life sustaining power of the water that emanates where the Lord is, as there will be a fishing industry in the Dead Sea. There will be swamps and salt marshes in some sections of the Dead Sea. Fruit trees will grow on all sides of the river, and their leaves will not wither, nor will their fruit will fail. Every month the trees will bear fruit. The fruitfulness occurs as a result of the water from the Temple, and the fruit will be for food. The leaves of these trees will also be for healing. The nature of these trees are similar to what is described about the Tree of Life, Revelation 22:2.

Much has been written concerning the living waters from the Lord. Recall the encounter of the Lord with the Samaritan woman, John 4:7-26

Zechariah 14:6-9 also records the uniqueness of the Lord’s millennial presence in Israel when He enters His temple where:

Not only will the Lord rule over the entire earth, He will be the only Lord over all. Israel will also be a nation of priests as God intended when He met with them at the base of Mount Saini at the beginning of their exodus, Exodus 19:5-6:

In Ezekiel 47:13, The Lord instructed Ezekiel on how the land is to be divided amongst the tribes of Israel. Two portions are to be given to the tribe of Joseph as a result of Reuben's sin. This should have a profound impact on Christians today, that though the Lord has forgiven our sins, there are consequences to sin, which may affect generations to come. In this case, the impact of Reuben's sin is still being felt roughly 3.5 millennia later and then on into eternity future. His sin was having sexual relations with his father’s concubine, and as a result he lost his birthright as the first born of Jacob. The birthright and the property went to Joseph, who was the first born to Rachel, 1Chronicles 5:1-2. Joseph does not appear on the list of names of tribes to be allocated a lot of land, but his two sons were listed, and each were given a lot of land, therefore qualifying as a double portion for Joseph.

In Ezekiel 47:14, the Lord instructs Israel to equally divide the land among them. The Lord had sworn to Israel’s forefathers that this land would be their inheritance. The boundaries for their inheritance was originally promised to Abram’s descendants, Genesis 15:17-21 (the river of Egypt may mean a wadi named either Egypt or el Arish and not the Nile River as argued by some).

God had promised Moses the land east of the Jordan, for their possession, but that they would not receive all the land at once since their numbers were not adequate to manage the whole land at that time, Exodus 23:20-23, and Exodus 23:27-31, (note the prayer of Jabez 1Chronicles 4:10). The Jordan River was the eastern boundary of the promised land for the children of Israel, Deuteronomy 4:21-22. This promise was passed on to Joshua, Joshua 1:2-5. The Lord had given Israel all the land that He had sworn to give them, and they took possession of it and settled there, Joshua 21:43-45. During his reign, King Solomon's influence extended across all of these boundaries, including the Red Sea (Yam Suph) 1Kings 4:20-21, and 1Kings 9:26-28.

In Ezekiel 47:15-21, the overall boundary of the land to be given to Israel forevermore, was provided:

In Ezekiel 47:22-23 the Lord states that the inheritance is for the tribes of Israel and for the Gentiles who settle among them and have children. They are to be considered as native-born Israelites, Exodus 23:9, and Exodus 12:48-49. Also, they are to be allotted an inheritance in whatever tribe they settle in.