It is not necessary when one dispensation is completed that God puts in place a completely new system. Parts or the whole of previous dispensations can carry into the next dispensation. In this case, the test of Adam and the woman was obedience to God’s Word. In one of his broadcast sermons on Pathway to Victory, Dr. Robert Jeffress said that ‘for us today, obedience protects us from the consequences of sin, from doubt about our salvation, from loss of future rewards, and from Satan making further entrance into our lives.’

The second dispensation is conscience, or moral responsibility that was initiated by God because of the fall of Adam and Eve. The parties involved in this dispensation were Adam and Eve, and all their children; the entirety of the human race would inherit Adam’s sin nature: This is because all mankind is made in the likeness of Adam and after his image, and therefore born in sin, Genesis 5:3, Romans 5:14, 1Corinthians 15:22. This is why the Lord provided them with hope for a Savior, Genesis 3:14-15. It was in the making of coats of skins for their covering that the Lord showed them the way of sacrifice for sins until the day of mankind’s redemption by the blood of Jesus Christ on the cross, and our hope of eternal life by His resurrection on the third day. This sacrificial system was practiced properly by Abel, Hebrews 11:4. Also, after the fall, by faith, Adam renamed Woman to Eve, because she would be the mother of the human race, Genesis 3:20.

The dispensational judgment was:

The following chart shows the impact of the fall and lineage of mankind who are under sin, needing a savior. 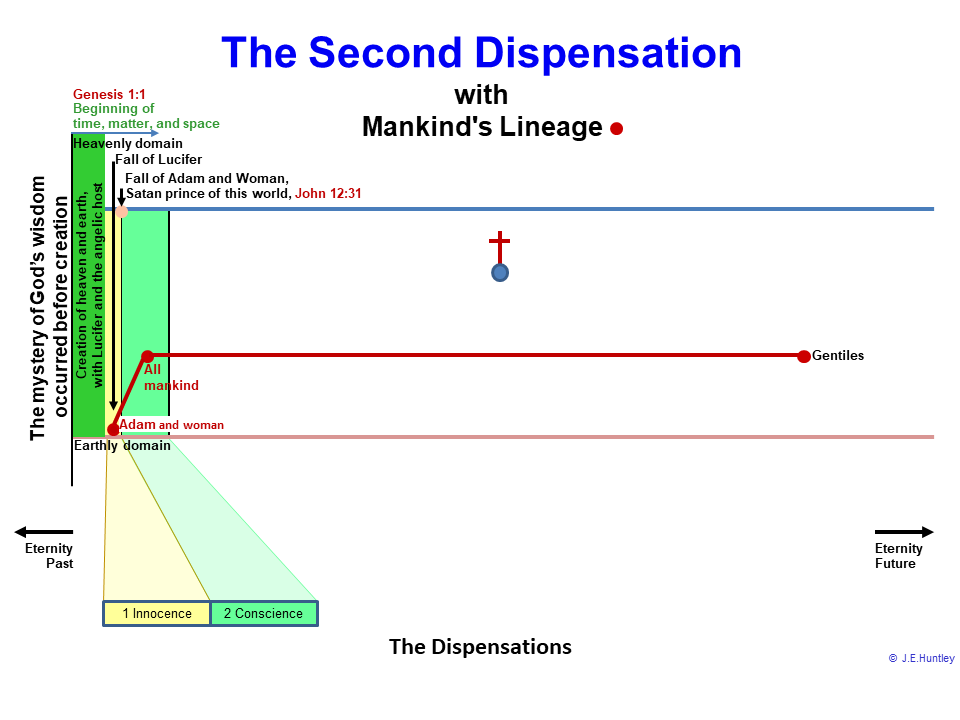