Interpretations: The Mystery Program - The mystery of Israel's Blindness

Paul wrote to the believers in Rome (Romans) one of his great doctrinal epistles, the other was Ephesians. Important passages in Romans 9-11 concentrate on the role and status of the Jews in Israel, and the remnant of the nation who were and are believers that Jesus is their messiah. Closing this section on Israel, Paul brings to light the mystery of Israel’s blindness within context of God’s covenant relationship with Israel, Romans 11:25.

Most importantly, Paul tells the Roman believers that God has not cast away His people, Romans 11:1. Paul had an impassioned desire that his Jewish brethren would accept Christ Jesus as their true Messiah, Romans 9:3, 10:1-2. Nevertheless, a long time afterward a doctrine emerged, which is not rooted in truth. Some Christian churches today have adopted a false doctrine that teaches God has rejected Israel. This is called replacement theology. It states that God’s rejection is based on the Jews giving Jesus up to be crucified, Matthew 27:23-26, Acts 2:36-37. Romans 11 utterly refutes this false doctrine. God has always reserved for Himself a remnant of Israel who believe in the Word of the Lord, Romans 11:4. Today, that remnant is part of the Body-of-Christ, according to the election of grace, the same grace Gentiles are saved by, Romans 11:6, Ephesians 2:8-10, Acts 15:7-11.

Paul did write that Israel had not obtained what she sought (salvation), but the remnant did obtain it, Romans 11:7. There is a major division among Jews concerning Jesus, whether they believe Him to be their Messiah or not. First was the election, or remnant Paul refers to, which is the little flock Jesus said would be given the kingdom of God, Luke 12:31-32. The number of believers grew greatly from those few initial believers in Christ Jesus among the Jewish community, Acts 2:47, 5:14. From the start, there were 120 identified after the Lord’s ascension, Acts 1:15. The remainder of Israel were blinded, rejecting their promised messiah as Moses prophesied, Deuteronomy 18:15. Paul quoted Isaiah, Romans 11:8, to illustrate the blindness sent by God on Israel due to their rejection of Him; paying only lip service to Him, Isaiah 29:10-13. Paul also quotes David, Romans 11:9-10, who wrote in his messianic psalm, that because of their rebellion, those blessings had led to their fall, Psalm 69:22-23.

Paul goes on to question if their stumbling at the cross resulted in their fall, and the rhetorical response is no, Romans 11:11-12. Jesus is the stone, smitten for Israel on their exodus, Exodus 17:5-6. This stone of salvation that was presented to Israel was refused, but it became the head stone for the corner, Psalms 118:21-23. It became a stumbling stone to Israel and Jerusalem, Isaiah 8:13-17.

Related to this period of time in Israel’s history, Jesus told a parable of a fig tree in a vineyard that was fruitless. This parable pointed to Israel’s rejection of Christ, and God’s grace to allow one more season after His crucifixion for Israel to believe on Him, Luke 13:5-9, as shown in the following graphic, which shows the timeframe of the fruitless fig tree. 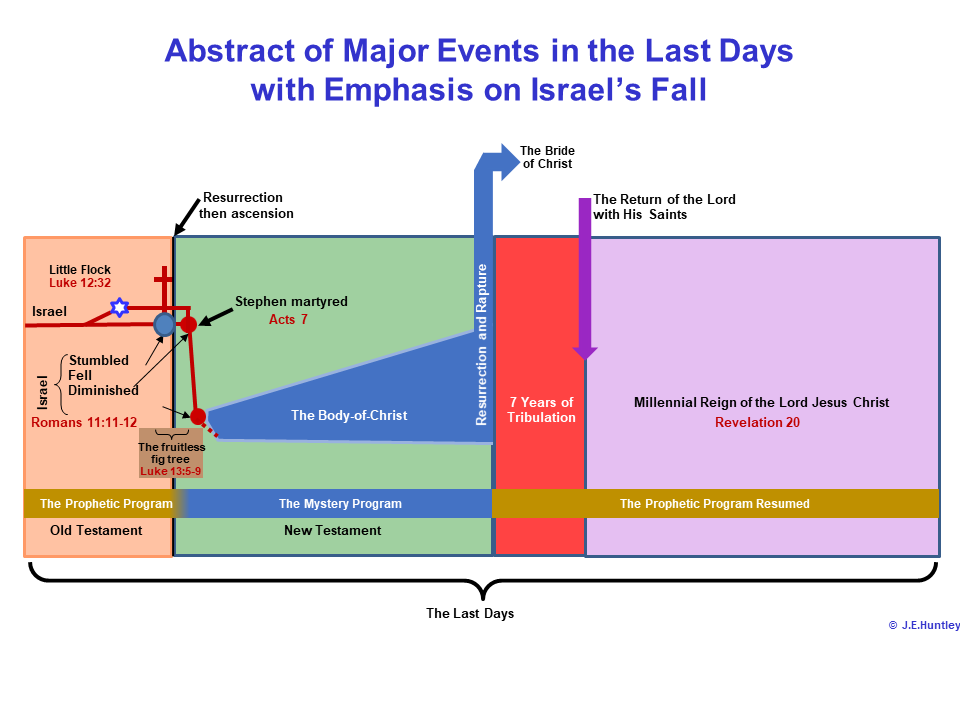 When the power of the Holy Spirit fell upon the little flock, Jesus said they would be given the kingdom of God, Luke 12:31-32, Acts 2:1-4. They were also used by the Holy Spirit to witness to Israel’s leadership three times concerning the truth of Jesus Christ, Luke 12:10. The first occasion was when Peter and John appeared before them, Acts 4:18-20. Second, was when all 12 apostles appeared before Israel’s leadership, Acts 5:28-33. Third was when Stephen was martyred, Acts 7:51-57. With Israel’s fall (not when they stumbled at the Lord’s crucifixion), because of their 3rd rejection of the Holy Spirit’s witness to them, salvation came to the Gentiles, Romans 11:11. God’s purpose in all this was to provoke Israel into jealousy. Israel’s fall also led to the riches to the world. Their diminishing (of the Jerusalem church led by the 12 apostles) gave riches to the Gentiles, the Body-of-Christ, Romans 11:12, Acts 15:14, 1Corinthians 12:27.

Paul takes the occasion to inform Gentiles, though we were enriched by Israel’s diminishing, how much greater the blessings to the world will be when God restores Israel to their fulness (kingdom age), Romans 11:12. At that time all things will be in alignment with God’s original intent when He placed Adam and Woman in the Garden of Eden.

Paul asserts his apostleship to the Gentiles in Rome since he had yet to visit with them, Romans 11:13, 1:10-12. He reveals his love and concern for his fellow Jews, Romans 11:14-16. Paul then uses the analogy of grafting branches into an olive tree to show the relationship of Jews and Gentiles within Jesus Christ, Romans 11:17-24. Because of unbelief, Israel was broken off from the olive tree. Gentiles were grafted in by faith in that same tree, but they were warned by Paul not to be high-minded. Being the natural branch, Israel will be grafted back in the olive tree when they believe once again.

Paul now writes concerning the blindness of Israel, Romans 11:25. The nation of Israel is blinded in part, but a remnant of Israel are now in the Body-of-Christ, Galatians 3:28, Colossians 3:11. Israel’s blindness will continue until the fulness of the Gentiles comes in, which is the time of the snatching up of the Body-of-Christ (or known as the rapture), 1Corinthinans 15:51-58, 1Thessalonians 4:13-18.

Following the snatching up (rapture) of the Body-of-Christ, God’s prophetic plan for Israel will resume, which is the last week of the 70 weeks-of-years revealed to Daniel the prophet, Daniel 9:24-27. All Israel will be saved, Romans 11:26, Isaiah 59:20-21, 60:1-3. The Lord will come out of heaven to deliver them from the great tribulation, and He will turn away the ungodliness from Jacob. This is God’s covenant with Israel, Romans 11:27.

Because of the gospel, 1Corinthians 15:1-4, the Jews became enemies of the Body-of-Christ. Yet, because of the covenants and promises God made with Abraham and David, they are loved by grace and not works, Romans 11:28. God is always true to His Word, and He will not forget nor neglect anything promised or covenanted to Israel, Romans 11:29, Isaiah 55:11. Paul reminds the Gentiles that in the past we did not believe God, but we have obtained mercy through Israel’s unbelief, Romans 11:30. Paul reveals that though Israel is in a state of unbelief, the same mercy extended to Gentiles will also come to Israel, Romans 11:31.