Interpretations: The Mystery Program - The mystery of Godliness

In Paul’s first epistle to Timothy, he describes the mystery of Godliness in six parts as pertains to Jesus Christ, 1Timothy 3:16:

Paul begins this verse in a very declarative voice, with great praise and worship of God, 1Timothy 3:16. This verse may have been a song of worship or a creed of the early church, but it was one of the revealed mysteries given to Paul. This passage proclaims the greatness of the mystery on godliness, which encompasses the work of Christ in His flesh, beginning with His birth to the time He will establish His kingdom on the earth, 1Timothy 3:16, Titus 2:11-14.

First, God was manifest in the flesh, which was prophesied long ago to Adam and the woman, Genesis 3:15. Immediately afterward, Adam called his wife Eve because she was the mother of all mankind, Genesis 3:20. Whereby, she mistakenly thought her first male child, Cain, was going to be the fulfillment of the prophecy God delivered to them, Genesis 4:1. Since that time and all through Jewish history, the prophets inquired and searched diligently of what they prophesied concerning the grace we now have, and when it should come, 1Peter 1:10-11. This grace of God the prophets sought for began when Jesus tabernacled with us in the flesh, the only begotten of the Father, full of grace and truth, John 1:10-14, 1John 1:2-3. Jesus, in whom dwells the fulness of the Godhead bodily, told Philip the night Jesus was betrayed, that those who had seen Jesus had seen the Father, John 14:9. And the reason Jesus was crucified, is that He was condemned because He was the Son of God and said so, Matthew 26:63-66. As a result, one of the tests of false teachers and antichrists John warned of, is if a spirit or person does not confess that Jesus Christ came in the flesh, that person or spirit is not of God. Instead, that person has the spirit of antichrist, 1John 4:2-3.

Second, Jesus was justified in the Spirit. The Holy Spirit was present when Jesus was baptized by John and God the Father said, “This is My Son in whom I am well pleased,” Matthew 3:16-17. The Holy Spirit led Jesus into the wilderness for 40 days after His baptism of John to be tested, or tempted by Satan, the devil, Matthew 4:1-11. Throughout His early life, Jesus was tempted in every aspect as we are, John 1:10-14, 1John 1:2-3. He was condemned because He was the Son of God, and was the ransom for us from all our sins, Mathew 26:63-66, Mark 10:45. Then after His ascension the Lord sent the Holy Spirit to comfort the believers in Jesus Christ, and to form, build and lead the church, the bride of Christ similar to Abraham’s servant finding a wife for Isaac, Genesis 24. The Holy Spirit came from the Father, and the Spirit testifies of Jesus, John 15:26. Jesus promised that the Holy Spirit will guide the Apostles in all truth. The Holy Spirit would not speak of Himself, but what He heard and glorify Jesus, John 16:13-14. And to the Body-of-Christ, Paul wrote that having received the Spirit, which is of God, we know about the things given freely to us of God. These are taught by the Holy Spirit, leading us to compare spiritual things with spiritual, 1Corinthians 2:13.

Third, Jesus was seen of angels. The angel Gabriel announced to Mary the virgin birth” Luke 1:26-38. An angel appeared to shepherds and along with a heavenly host, they praised God for the birth of Jesus, Luke 2:9-14. Angels ministered to Jesus after he was tempted 40 days, in every aspect as we are, Matthew 4:11, Hebrews 4:15. An angel strengthened the Lord in the garden, Luke 22:43. Two angels were present at the resurrection of Jesus, one sitting at the head, the other at the feet of where the body of Jesus was lain, and these angels were seen by Mary Magdalene, John 20:11-13. Two angels witnessed to the disciples after the Lord’s ascension, Acts 1:10-11. Angels desire to look into things concerning the work of God after the death, burial and resurrection of Christ Jesus, 1Peter 1:12. The purpose of the church was to make known to the principalities and powers in heavenly places the manifold wisdom of God, Ephesians 3:9-12.

Fourth, Christ Jesus is preached to the Gentiles. During the Lord’s earthly ministry, He was a minister of the circumcision for the truth of God and to confirm the promises made to Israel, Romans 15:8, and told His Apostles not to go unto the Gentiles but to the house of Israel only, Matthew 10:5-6. In the midst of His ministry, Jesus told those who followed Him, not to make Him known, to fulfill prophesy and looking forward to when the Gentiles would trust Him, Isaiah 42:1-4, Matthew 12:15-21. These passages point to the Lord’s future ministry to the Gentiles, after He first presented Himself to Israel and be rejected, Daniel 9:26.

Peter was given the keys to the kingdom of heaven and to lose or bind in earth and heaven, Matthew 16:19. He exercised that gift after the power of the Holy Spirit came upon the 120 men and women believers and 12 apostles in an upper room, Acts 1:15. The Lord used Peter to open the kingdom to Gentiles, Acts 10:42-46, 11:12-17. Peter was then used by the Lord to lose the Gentiles from the law, Acts 15:7-11. Before Peter began to open the kingdom to the Gentiles, the Lord chose Saul (later Paul) to be His instrument to preach, teach, and build up the Body-of-Christ. The Lord appeared to Saul on the road to Damascus on a mission to persecute and destroy the growing group called “The Way,” Acts 9:1-2. But while on the journey, Saul was smitten by the Lord and he believe that Jesus was indeed the Messiah, Acts 9:5, 17-20. The Lord chose Saul (Paul in Acts 13:9), to witness to the Gentiles, Acts 9:15-17, and from then on Paul was the Apostle to the Gentiles, Romans 11:13.

Fifth, Christ Jesus is believed on in the world. As mentioned previously, the Lord’s earthly ministry was to the house of Israel. At that time, Jesus expounded to Nicodemus about His purpose, to bring salvation to a lost world (Jews and Gentiles), John 3:1-21. Afterward at the end of His earthly ministry, Jesus looked forward in time and remarked on the action of a woman who anointed Him in preparation for His death on the cross. Jesus said that it would be a memorial to her wherever this gospel is preached throughout the whole world, Mark 14:1-9. Before His arrest, Jesus prayed to the Father in the Garden of Gethsemane, asking that He would keep His apostles from evil. As the Father sent Jesus into the world, so Jesus sent His apostles into the world so that the world would believe. Jesus was sent by the Father, who loved the world as the Father loved Jesus, John 17. After His resurrection, Jesus told His Apostles to go into all the world and preach the gospel to every creature, which they eventually did, Mark 16:15. Paul spoke to the Romans that their faith was a witness to the whole world, Romans 1:17, and to the Thessalonians, how their new faith in Christ Jesus was spread broadly through their region, 1Thessalonians 1:6-8. God is reconciling the world unto Himself, so we are a new creature in Christ, 2Corinthians 5:17-21.

Finally, Christ Jesus is received up into glory. When Jesus first ascended up into glory, he led all of the Old Testament saints’ souls and spirits who were residing in the good side of Hades, or Hell, to be with Him in heaven, waiting for the resurrection of their bodies, which will occur after the wrath of the Lord on the world is completed in the tribulation. Ephesians 4:8-10, Luke 16:19-31, Job 14:10-14. Jesus was seen by all eleven of His apostles together with a total of 120 believers, men and women Jews, ascending up in the clouds to heaven, Acts 1:9-15. Peter spoke to the crowd of Jews on Pentecost, declaring that the Lord was sitting at the right hand of the Father, Acts 2:33-34. Paul wrote that Christ was at the right hand of God, and makes intercession for us, Romans 8:34, Ephesians 1:20. Christ is presently sitting next to the Father, but not on a throne. Jesus is waiting to sit on the promised throne of David when His kingdom on earth is established, Colossians 3:1, 2Sammuel 7:16, Psalm 110. The beginning of the Lord’s kingdom will be announced by great voices in heaven and the 24 elders (the church), Revelation 11:15-19. Then the Lord returns and reign over the world, Revelation 19-20.

The following graphic illustrates these six points of the mystery of godliness, beginning with the birth of Jesus to the time He sits next to the Father awaiting the moment for His return to rule and reign over the world on David’s throne at the end of the tribulation. 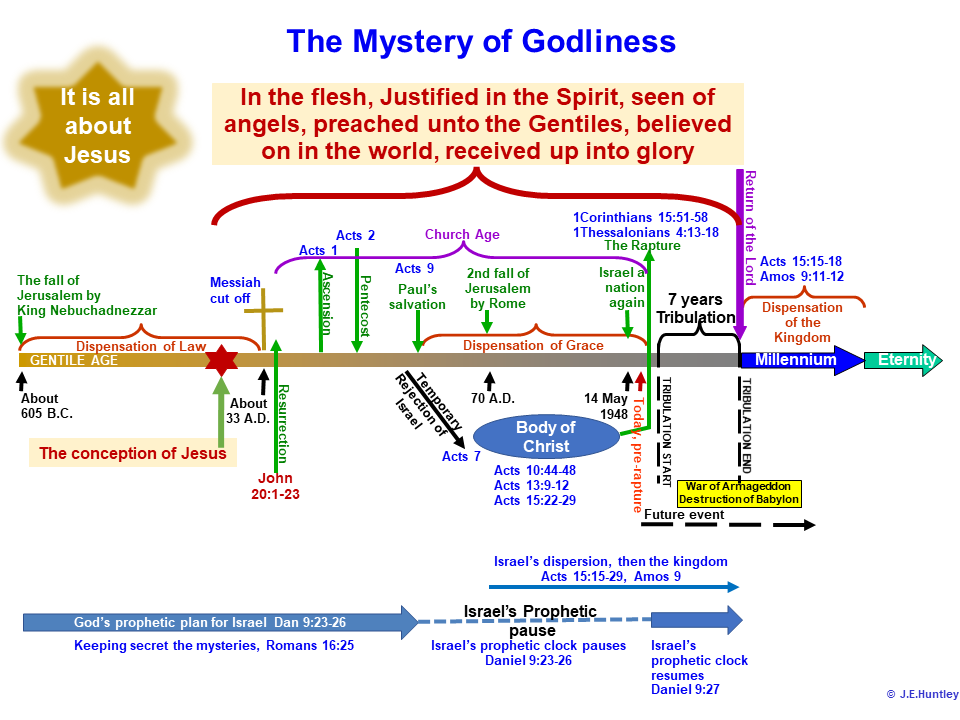