Over time, the Lord God instituted two programs, the prophetic program for Israel (which looked toward the millennial reign of Christ Jesus on earth, Jude 1:14-15) and the mystery program for the Body-of-Christ, to establish His government throughout His creation using mankind as His governing agents to accomplish His will.

Mankind was created in His image, Genesis 1:26-27 and had the breath of God, the Holy Spirit in them, Genesis 2:7. He intended for mankind to have dominion over the earth, the earthly domain, Genesis 1:28. But, as a result of the fall of Adam and Woman, God judged the serpent and mankind, which began the prophetic program, which looked forward to the redemptive work of Jesus on the cross by the shedding of His blood and the forgiveness of sins, Colossians 1:14.

Before the flood, 1Peter 3:20, the prophetic program was for all mankind, focused on a coming Savior who would come through the seed of a woman, Genesis 3:15. After the flood, God narrowed the bloodline from all the families in the world through whom the Savior would come, to one family. That family was through the seed of Abraham, Isaac and Jacob, Matthew 1:2, through Joseph of the tribe of Judah, and who was the husband of Mary, the mother of Jesus, Matthew 1:16-17. 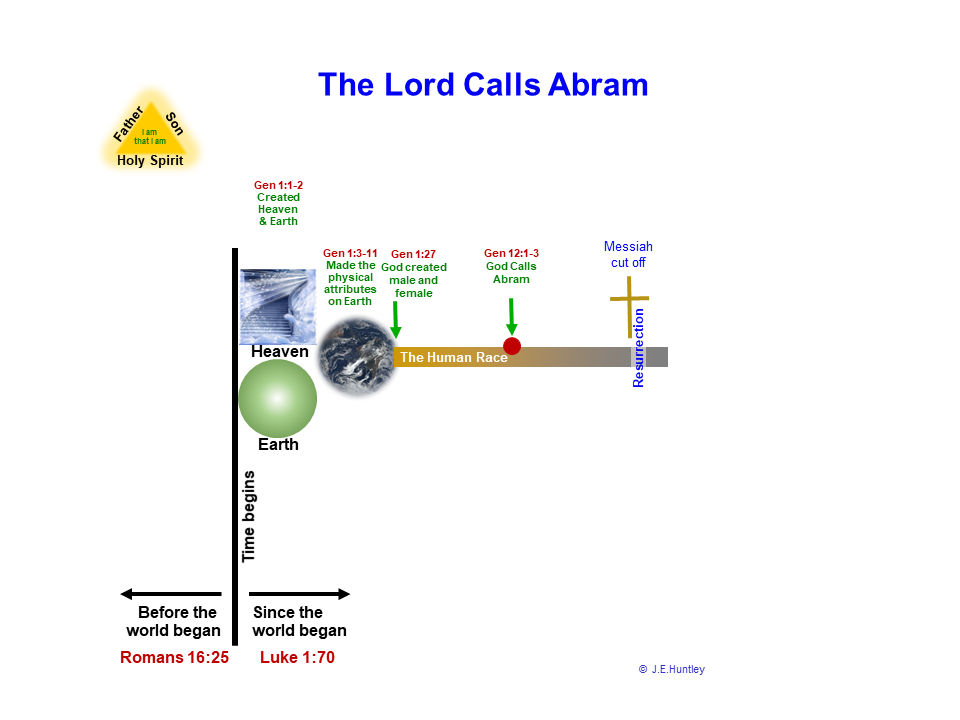 The prophetic program for Israel began when the Lord called Abram from the human race to create a new nation, Israel, with whom God would have a covenant relationship. The beginning of the prophetic program for Israel is shown by the red circle in the middle of the graphic on the left. The emphasis of the prophetic plan with Israel began when the Lord called Abram from all the families in the world and told him to leave the Ur of the Chaldees, Genesis 11:31-32, 12:1. Abram was led by the Lord into Canaan where the Lord promised to make him a great nation. Abram and his seed were blessed by God, as would anyone else or any other country would be blessed if they blessed Abram, Genesis 12:1-3. Later, the Lord called out of Egypt the 12 tribes of Jacob, who had become a nation while in captivity to Pharaoh, Genesis 15:13-14, 46:3.

God brought Israel out of Egypt with a mighty hand to become a unique and peculiar people to Him, Deuteronomy 7:6-11, 29:9-15. Israel is the only nation with whom the Lord made covenants with, beginning with Abraham, Genesis 15:9-21, 17:1-22. As a result, Israel dwells alone and is not reckoned among the nations, Numbers 23:9.

During His first earthly ministry, the Lord told the woman at the well in Samaria that salvation came from the Jews, John 4:22. Jesus was the true light that was given to every person born into the world. But when He came into the world that He created, the world did not know Him. He revealed Himself to the nation of Israel, but Israel did not receive Him, John 1:9-11, 12:46. The leadership of Israel rejected their Messiah and delivered Him to Pilate to be crucified, John 12:19, 19:15-16. The few who did believe in the name of Jesus, became the sons of God, John 1:12-13.

Over time, this prophetic program for Israel had to be paused because of their unbelief and fall, Romans 9:30-33, 11:11. But because of their fall, salvation has come to the Gentiles. So, the mystery program for the Body-of-Christ is now in effect. However, when the snatching away (rapture) of the Body-of-Christ occurs, then the prophetic program with Israel will resume immediately and continue through eternity. This is because God entered into everlasting covenants with the nation of Israel, Genesis 17:7, 13, 2Samuel 23:5. The prophetic program pointed to His Son, Jesus Christ, and His victory over the serpent at the cross, Genesis 3:14-15.

Christ Jesus reached out to Israel through the Holy Spirit after His resurrection, Luke 13:6-9, yet Israel’s leadership continued to reject their Messiah on three specific occasions. The first rejection of the Holy Spirit occurred when Peter and John appeared before the high priest, Acts 4:5-31. The second rejection occurred when all 12 apostles appeared before council of the high priest, Acts 5:27-41. The final rejection was when the disciple Stephen, full of the Holy Spirit, spoke God’s truth of the rebellion by Israel’s leaders against the Lord. Because of this indictment by the Holy Spirit who spoke through Stephen, Mark 13:11, they killed Stephen, with Saul giving his approval, Acts 6:9-15, 7:1-60. This third rejection caused the nation to fall, Romans 11:11-12. The following graphic illustrates the three blasphemes of God by Israel, leading to their temporary fall, layered on top of the Jewish view of the end times. 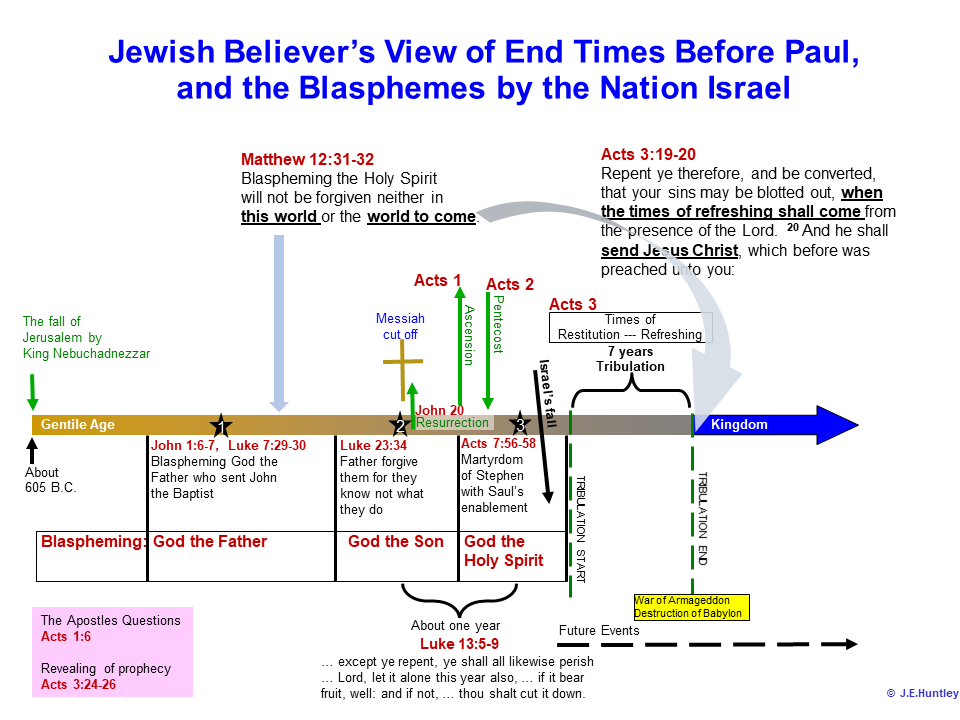